I always make it a point to try something new in my garden every year. Although it usually means I'm going to grow some new variety of radish or a veggie I haven't grown before (like peanuts or salsify), this year the "new" item in my garden is going to be grafted tomatoes and grafted eggplants. 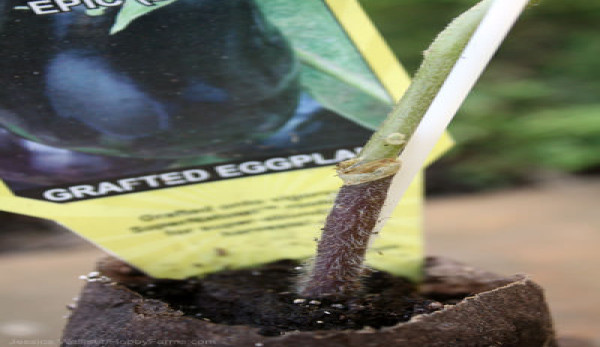 I always make it a point to try something new in my garden every year. Although it usually means I’m going to grow some new variety of radish or a veggie I haven’t grown before (like peanuts or salsify), this year the “new” item in my garden is going to beÂ grafted tomatoes and grafted eggplants.

Grafted veggies started popping up in seed catalogs a few years back, though apparently large-scale market farmers had already been growing them for years. I’ve been meaning to try them in my own garden since I first spotted them in the Territorial Seed catalog, but I’m just now getting around to it.

I planted two grafted tomatoes and one eggplant. They are created by attaching the shoot system of the desired eggplant or tomato (a Brandywine tomato for example) to the root system of a super-hearty, disease-resistant variety. The plants are grafted together as tiny seedlings, and they go on to grow as one plant. It’s the same process they use to create many fruit trees, roses and “poodle” topiary bushes. The resulting plant is said to show increased vigor, earlier production, better disease resistance and increased yields. I’m growing my grafted veggies side-by-side with plenty of non-grafted ones so that I can make an easy comparison as the season progresses.

The only thing you need to do differently with grafted veggies is to ensure that graft union (easily visible as a raised ridge on the stem) remains well above the soil level at planting time. If itâ€™s buried, the shoot system will begin to produce its own root system rather than relying on the one that carries the desired traits. This will negate the effects of the graft.

In college, I took a course on grafting, and it’s not a difficult processâ€”nothing too challenging about it. So if these grafted veggies perform exceptionally great for me this year, perhaps I’ll try to graft my own next season, just for kicks. I’ll keep you posted on their progress!

Chick Update
And speaking of progress,Â the chicks we got a few weeks ago are now awkward teenagers. They have moved out of the bathtub (thank goodness!) and are spending their days in a fenced area adjacent to our regular chicken run. Their nights are spent in a baby pool in the garage. Itâ€™s crazy how fast they are growingâ€”and how much they eat!