Grape vines in my orchard that are decades old are proving to be resilient and showing signs of life. Here's how I gave them a second chance. 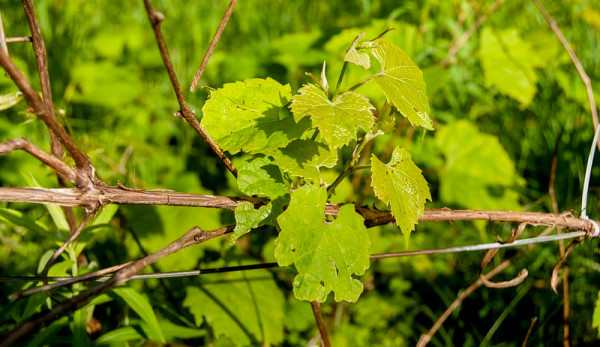 Earlier this year, during a very rainy spring when the ground was too wet for many farming projects, I began work on something Iâ€™d been meaning to tackle for a whileâ€”attempting to revive a few old grape vines in the farm orchard.

The grape vines have been there for yearsâ€”I mean, weâ€™re talking decades. They were planted by the previous owner, who had built two rows of wire fencing for the grape vines to climb. Judging from the amount of rot affecting the wooden postsâ€”along with a metal ring inscribed with â€ś1965â€ť nailed into oneâ€”I speculate the fence and the grape vines are approximately 50 years old.

Of course, any fence that old is bound to show some wear and tear, and this one was no exception. One by one the posts had collapsed, making it harder for the grapes to stay upright, and it didnâ€™t help that a series of windbreak trees (again planted by the previous owner) had grown to the point of shading the grapes for the better part of each day.

But the grape vines have proven resilient (even if they havenâ€™t produced a significant number of grapes in many years), so this spring I gave them a chance to thrive once again.

To start, I removed the rotting wooden posts (even the few that remained standing) and replaced them with metal stakes. The original wire, despite its age, was still in excellent shape (with some of the vines still clinging happily in place), so I attached it to the stakes to restore the fence.

Then came the slow, delicate process of sorting through the tangled, twisted grape vines, only some of which were still alive. A problem with live vines: They often look completely dead at first glance, so I had to carefully examine each one for live buds (which were just beginning to leaf out). In addition, I employed special care while handling the vines, which arenâ€™t very strong and are easily broken.

Once I had sorted through the vines, I guided each one to the wires and attached them securely using zip ties. This elevates the vines into the air, giving them more sunlight and room to grow. Once the tendrils on the vines have grown around the wires, the plants can support themselves without the aid of the zip ties.

Only time will tell how well these vines rebound, but theyâ€™re off to a solid start. As you can see in the photo above, they have leafed out nicely and are already producing new growth. I also discovered that the extent of the live vines is much greater than I thought, so Iâ€™ll add more stakes and more wire in the future to support more plants. Next stepâ€”proper pruning!