From the moors to lochs, Scottish Highland cattle have traveled a rich history and maintained their rugged good looks. 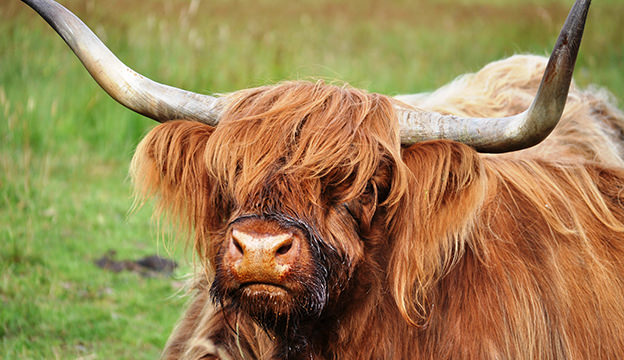 A coat of woolly hair, a massive body and sweeping horns, all in a package designed to withstand icy temperatures, low-quality forage and a host of predators. Although this may sound like a description of the extinct woolly mammoth, it’s actually a word picture of an ancient cattle breed known as the Scottish Highland.

The Scottish Highland is one of the oldest breeds of cattle in the world. Going as far back in time as the sixth century, some historians believe the ancestors of today’s Scottish Highland may have come to Scottish shores from Scandinavia with the Vikings.

Scottish breeders of the subsequent centuries recognized these invaluable traits in their cattle, and worked to preserve them. Crofters, small farmers who lived in the Scottish high country, relied on the Scottish Highland for survival. The breed’s milk, meat and hair were a source of sustenance for these farmers, and the calves were a valued trade commodity within Scotland and in England.

Although most of today’s Scottish Highland cattle are red or yellow in color, most of the old-time Highland cattle were black. Called Kyloes, these cattle were found mostly on the islands and were on the smaller side. West Highlands, on the other hand, were larger and lived on the mainland. Their reddish coats predominate in modern examples of the breed.

The Scottish Highland made its way to American shores in 1893, when the breed was first imported by a cattleman in New York. The American Scotch Highland Breeders’ Association—later called the American Highland Cattle Association—was formed nearly 50 years later. The breed had already developed a toehold in North America by the time the registry was formed to preserve and promote the breed in the United States.

People who own and breed Highland cattle are passionate about the breed. According to those who love these animals, this is no ordinary breed of cattle. Rather, Highland cattle are substantial and dramatic looking animals, with a coat of hair that lends an exotic and almost prehistoric look to them.

Suzanne Clothier-Rice, who co-owns Hawks Hunt Highlands in St. Johnsville, N.Y., with her husband John Rice, became involved with Highland cattle five years ago, in part because of the breed’s appearance.

“I first met some Highlands while traveling in Scotland back in the early 1980s, and it was love at first sight,” says Clothier-Rice. “It’s impossible to meet these cattle and not be smitten with their striking looks. Their shaggy coats, immense and elegant sweeping horns, and their powerful bodies all combine with their unblinking gaze of intense curiosity to create a picture not easily forgotten.  When I report that we’ve got Highlands, people who can’t remember a Holstein from a Hereford invariably say, ‘Oh, those are the shaggy ones with the big horns, right?’”

The Scottish Highland breed standard, which describes the Highland in great detail, notes that the ideal Scottish Highland has a straight topline from the shoulders to the tail head, and has hindquarters that appear deep and square from the rear. The cattle’s straight, sturdy legs and large, well-set hooves round out the general appearance of the breed.

The breed’s horns are among its most distinctive characteristics, and vary between bulls and cows. While bulls’ horns extend in a level position from the head, curving slightly forward and downward, cows’ horns extend horizontally and have a feminine, graceful and symmetrical appearance.

The Scottish Highland coat is another unusual aspect of the breed. More profuse in Highlands kept in colder climates, the hair consists of a soft fluffy undercoat protected by a long, strong, outer coat that can reach 14 inches in length. Both of these coats shed during warm weather, and come in black, brindle (red with black streaks, black with red streaks, or yellow with dun streaks), light red to dark red, yellow, dun, silver dun and white. The most commonly seen colors in the breed are red and yellow.

The breed’s intense appearance is offset by its quiet and charming temperament. “For us, temperament is critical,” says Clothier-Rice. “We live very closely with all our animals, know each by name, and prefer to work on a very hands-on basis. Nasty, flighty or aggressive animals hold no appeal for us, and even our beef steers are pleasant to work around. The Highland bull is also considered a relatively mild animal—no small consideration when you think about the size, power and speed of any bull.”

While Highland cattle have many virtues, they also offer challenges in some respects. “They are smart. Way too smart.Uncanny smart,” says Clothier-Rice. “And staggeringly athletic. The combination of great intelligence, naturally intense curiosity, awareness of detail, and athletic ability means that it’s not only not easy to fool a Highland, but they are capable of simply leaving a troublesome situation by vaulting over the nearest fence. This humbles us and reminds us that they do what we ask them to do and stay where we ask them to stay not because we have removed all other options—they do so because they feel like doing so. The moment cooperating no longer makes sense to them, they can and do take advantage of options they’ve had all along!”

Although many treasure Scottish Highland cattle for their unique appearance and docile personality, most breeders also value these cattle for their fine meat. Described as lean and well-marbled, and void of the layer of fat most often seen in cold weather cattle, Highland beef commands a hefty price at market.

According to testing conducted by the National College for Food, Land and Environmental Studies, a European organization, Highland beef has lower levels of fat and cholesterol and a higher protein and iron content than other beef, which is one of its appeals.

“The beef is wonderful, with excellent flavor but also lean,” says Clothier-Rice. “We’ve gotten so spoiled by the Highland beef that we rarely eat beef dishes anywhere but at home. There is something profound about knowing your food, knowing its name and being able to put a face on the steak. For some folks, I suppose such intimacy would be troubling. For us, it allows us to eat with peace, knowing how that steer’s life was from the day he was born to the day he died, knowing that quiet, easy days free from stress or fear was what he knew day after day, and that probably the most concern he ever experienced—short of the last moments—was being dewormed or vaccinated or separated briefly from the herd. It’s our deal with the cattle: We will treat you with love and respect, and we will honor your body with aware, respectful consumption after your soul has stopped inhabiting it. We do not take these animals or their meat for granted—and we are grateful beyond words for the Highlands in any form.”

For newcomers to raising livestock, and cattle in particular, Highlands are a good choice in a first breed. Not only are they easy to handle and care for, but in many parts of North America, they are readily available.

“We all have to start somewhere,” says Clothier-Rice. “When dealing with live creatures, it’s best to start with small numbers so that you can learn as you go without being overwhelmed or putting many animals at risk because of inevitable mistakes.”

For the complete cattle novice, it’s importance to acquire cattle with excellent temperaments, that are healthy, and can be easily handled, meaning they have been trained to halter, lead and tie.

“Having a kind, cooperative animal that knows the ropes can carry a novice a long, long way,” says Clothier-Rice. “I’d also suggest buying proven and possibly much older cows that, though a bit past their prime, can still produce calves for you—they know the ropes, they know what they are doing, and you can learn from and with them.”

If you are a novice but have patience to spare, you can start your fold with weanlings. In this case, you will need the help of an experienced cattle handler to help you teach the calves how to lead and tie, since this requires knowledge and practice.

Clothier-Rice recommends visiting a lot of farms to get an overview of the cattle available to you. “Visiting farms is not hard to do, since Highland folks seem to love nothing better than a chance to talk about their cattle, and usually are quite welcoming to visitors,” she says.

“We’ve learned a lot while leaning on a gate, watching cows, asking questions and just listening. Going to shows is also a good way to develop your eye for what you want, watch the cattle under some interesting conditions, talk to a lot of folks, and find what’s available.”

When considering a breeder to buy from, it’s important to make sure you and the breeder are both emphasizing the same qualities in Highland cattle. “Be sure what you want in the way of temperament is what also matters to that breeder,” notes Clothier-Rice. “Some breeders consider cattle friendly if they don’t run away when they see people, for instance. We want a cow that will voluntarily approach and seek out human company with interest.”

It’s important to remember that it can take quite a while to make money breeding Highland cattle, and some breeders never turn a profit, only making enough money to break-even. “Many beginners get involved with Highlands in order to make a lot of money,” says Clothier-Rice. “While well-bred cattle can sell for a fair amount—often far more than they would be worth as beef—there’s also a reputation that goes along with the ability to command such prices for cattle. There’s a joke that circulates among Highland folks: How do you make a small fortune in Highlands? Start with a large fortune.”

Although Scottish Highland cattle are becoming very popular in the United States, Canada and various parts of Europe, the tradition of breeding these cattle is still important in their ancestral home of Scotland.

Woodneuk currently has 110 Highland cows in calf and, including young females, calves, bulls and steers, has 330 cattle in total. “We try to breed quality cattle either for sale to other breeders or to go into the food chain,” says Woodneuk, whose facility is open to the public for visits.

“There are a number of butchers here who sell only Highland cattle beef. We also sell some in freezer packs from our farm.”

Michael Gibson, a former accountant whose Edinvale Farm is located in Speyside, Scotland, keeps a total of 600 cattle—80 of which are Highland—on 1,000 acres. Gibson sells many of his cattle for slaughter, as well as providing pedigree Highland cattle to other breeders. “In 1972, I bought my first two Highland cows in Oban,” he says. “I liked their hardiness and the fact that they did not require expensive buildings.”

Gibson finds that even in Scotland, the challenges of raising Highland cattle have more to with economics than actually dealing with the day-to-day tasks of caring for livestock. “Making a profit is a challenge,” he says. “They are great fun and you can make money, but you have to be realistic about the quality of your stock. Remember that quality pays: fat and sleek is good; skinny and dirty is not.”

This article first appeared in the February/March 2003 issue of Hobby Farms magazine.