The big news in our neighborhood this week was the repeated appearance of a green pheasant in the creek. 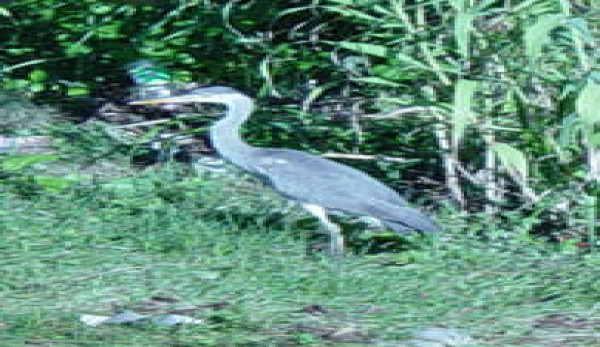 The big news in our neighborhood this week was the repeated appearance of a green pheasant in the creek.Â

Iâ€™m sorry the photograph is so lousy, but when I had my camera the bird was busy eating something on the ground and only raised his head a few times.Â  Take my word for it, this was a spectacular bird.Â

Some of the neighbors speculated that it was in fact a tame bird that had escaped.Â  This makes some sense, because there are a fair number of pheasant aviaries here in Italy.Â  There is a reasonably large participation in the annual fall pheasant hunting season, but not enough wild pheasants to please the hunters.Â

Pheasants are raised in large caged coops and then boxed up and sold to hunting cooperatives who release the birds into the wild a few days before the season starts.Â  Several times in our travels my wife and I have seen the trucks loaded with the boxed pheasants.Â

In the fall, I frequently see these pheasants in the farm fields that dominate the Po river valley on my train trips to Milan.Â  So, this green fellow appearing in the creek is more likely to be a raised specimen than exotic wildlife.

We do also get a lot of other birds in the creek that runs beneath our home.Â  The most spectacular have to be the kingfishers.Â  These birds are an iridescent copper blue with a rust-colored breast and look like little flying pieces of jewelry as they zip up and down the creek.Â Â

When weâ€™re lucky, one will stop and do some fishing at the pond we can see from our windows.Â  The birds hunt by perching on a branch above the water and waiting until an opportunity presents.Â  Then they fly straight up for a few yards before turning and diving straight down into the water.Â  When weâ€™ve watched, the bird comes up with a small fish about one in three dives.

The other big fish eater that lives along our creek is the big crane in the second photo.Â Â This impressively big bird wades in the shallows and hunts the fish.Â  He darts his head down into the water and once in a while comes up with a fish.Â  We do have a lot of fish in the creek, mostly Cephalo, which sort of resemble trout.Â

In the early spring, there are big swarms of perhaps a thousand little fish.Â  On an average basis, the pond below our house holds about 100 adult fish, some being as big as a foot and a half long.Â

The creek has intermittent ponds every few hundred yards and a series of waterfalls and cascades, and Iâ€™d estimate that in a twenty-minute walk up the creek, starting at the mouth where it empties into the bay, one could easily see a thousand fish.Â

Nobody but the summer tourists bothers to fish the creek, and the locals donâ€™t trust the other locals upstream not to have put some pollution in the water.Â  The water looks pretty clean to me and does get flushed out quite frequently and the banks get covered with several feet of rushing water.Â  The crane is particularly active in these flood periods, I suppose because the disturbed fish are easier prey.