Sustainable city living means taking advantage of every inch of space, and green roofs—or meadows in the sky, as they’re sometimes called—are an excellent way to do that, benefiting both building residents and the environment. Green roofs have been around since the days of Laura Ingalls, the girl heroine of the Little House on the […] 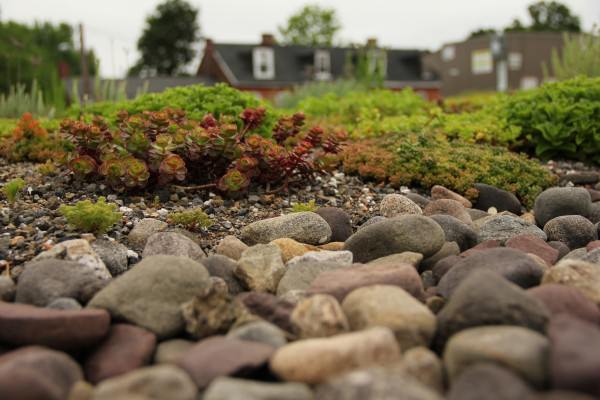 Sustainable city living means taking advantage of every inch of space, and green roofs—or meadows in the sky, as they’re sometimes called—are an excellent way to do that, benefiting both building residents and the environment.

Green roofs have been around since the days of Laura Ingalls, the girl heroine of the Little House on the Prairie books who lived in a sod house in the 1800s. But for today’s environmentally conscious urbanite who may live far from the plains, the term “green roof” takes on a different meaning.

Although solar panels and container gardening can technically make a roof “green,” the actual term “green roof” usually refers to a roof with some type of vegetative covering, providing everything from insulation to crops.

According Robert Berghage, director of the Green Roof Research Center at Penn State University, the following materials are required when planting directly on a roof:

Berghage recommends having a structural engineer ascertain whether your roof can bear the weight of a green roof and by how much. Many houses built after 1945 may not be candidates, he says. If that’s the case for you, he recommends putting a green roof on your garden shed, children’s playhouse or doghouse, all of which are easy to shore up with two-by-fours, if required.

A green roof can warm a home in winter and cool it in warm weather. For example, air-conditioning use has been cut by between 10 to 30 percent for test structures at Penn State’s Green Roof Research Center.

The green roof can also be a vegetable, flower or herb garden. A 6,000-square-foot organic farm on top of a warehouse in Brooklyn, N.Y., produces more than 30 types of fruit and vegetables that are sold to local residents and restaurants.

A green roof can be a habitat for wildlife and pollinators, enhancing the ecosystem. Bees, butterflies and hummingbirds are all fans of the green roof. Michigan State University’s Departments of Horticulture and Fisheries and Wildlife plan to conduct major study in 2011 on how successfully green roofs draw birds and beneficial insects.

Finally, a green roof can also be a place of beauty and respite in the middle of an urban area. Residential green roofs have been used in Europe for decades. The city of Stuttgart, Germany, has provided financial incentives for property owners to green their roofs since the 1980s. Brad Rowe, a horticulture professor studying green roofs at Michigan State University, says he’s seen enormous growth in interest in green roofs in the United States as well in the past 10 years, particularly the last five.

A green roof takes the concept of sustainable living one step further by integrating a home more fully into the landscape, even if that landscape is urban. There are plenty of rooftop growing, small and large, growing produce served in kitchens a few stories below its roots, but in the end, green roofs ultimately serve everybody.

Leslie Guttman is an independent journalist who has written about biodegradable Styrofoam and using fungi to remediate toxic waste. She is passionate about green living and believes sustainability is the key to doing well by doing good.