Grizzly Bear Sightings On The Upswing In Montana

Grizzly bears are moving back into their native territory, causing concern for farmers and ranchers in the area. 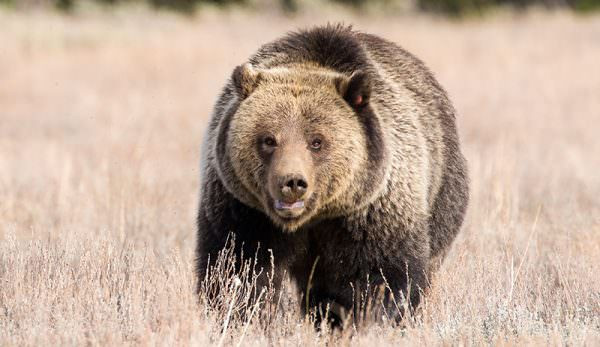 Montana residents around Glacier National Park and the foothills of the Rocky Mountain Front are accustomed to living with grizzly bears in their backyard, but seeing them traveling across a wheat field dozens of miles east of the mountains has recently raised a few eyebrows.

It appears that grizzlies are moving back onto their historical range for the first time in over a century. Duane Buchi, ranger at the Lewis and Clark Interpretive Center in Great Falls, Mont., says the Lewis and Clark expedition ran into grizzlies as far east as the Montana/North Dakota border, indicating they are accustomed to these wide-open spaces.

â€śThey had quite a time with the bears,â€ť says Buchi, who also notes that of the 32 grizzlies the expedition members killed along the journey, 28 were in Montana. Now it appears the bears are once again making their mark on the prairies of Big Sky Country.

â€śBut in the past two to three years, we have seen the population expand farther and more often,â€ť says Mike Madel, grizzly bear management specialist for Montana Fish, Wildlife and Parks. They have now been spotted as far away as 35 miles from the eastern slopes of the Rockies. â€śThe female adult grizzlies are teaching their offspring to use prairie habitat,â€ť Madel says. â€śItâ€™s a biological fact.â€ť

While itâ€™s a herald of success for the bears, it can cause problems with farmers and ranchers who arenâ€™t used to dealing with these clever, opportunistic omnivores. This canâ€”and often doesâ€”create an equally bad situation for the bears.

â€śGrizzly bears are not effective carnivores,â€ť says Madel, yet occasionally they will have to deal with a bear that figures out that sheep, or other livestock, can be easy prey.

In May 2016, a 6-year-old female grizzly bear was shot by federal officials after killing 40 sheep during one weekend at a ranch near Valier, Mont. This wasnâ€™t her first offense. She and her two cubs had already been relocated to the North Fork on the Flathead River drainage on the west side of mountains the previous July after killing livestock.

â€śThis female traveled about 258 miles, in a circuitous route, in about three months,â€ť Madel says. Her travels included a venture into Canada before returning to the same area where she denned up last fall. Fortunately, the yearling cubs were no longer with her when she preyed upon the sheep this spring.

Although predation is a reality, bears often prefer easier pickings. â€śWe have bears that are feeding on grain,â€ť Madel says. â€śTheyâ€™re shaking [the silo] doors to make the grain fall out.â€ť He also notes that with the bears moving onto farms, the empty bowl of cat food in the morning might not have gone to the resident barn cats, causing a potentially severe problem of a food-conditioned grizzly that might become bolder around homes.

For farmers and ranchers who are concerned with protecting their property and livestock, Madel says there are a lot of tools on the table, including Â­highly effective electric fencing, Karelian bear dogs or Â­acoustic deterrents, such as cracker rounds shot from a 12-gauge shotgun, propane-operated scare guns or even air horns. It is possible to keep the homestead safe, he says.

Folks who have lived with grizzlies for decades know co-existence is attainable through awareness and using proactive measures to ensure bears and people stay out of trouble.