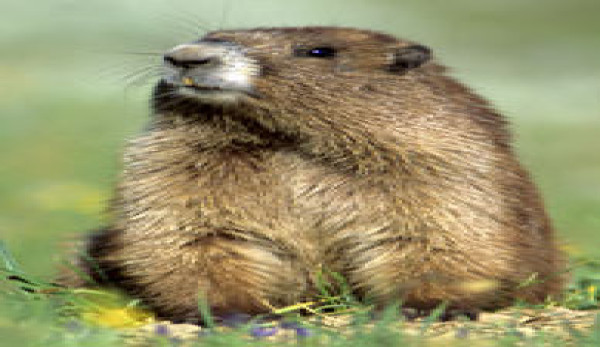 Last Thursday, when Mom brought our breakfast, she said, “Punxsutawney Phil says we’re having six more weeks of winter this year.” Uzzi and I looked at each other. It was 61 degreesāpretty spring-like, we thoughtāand who is Punxsutawney Phil?

So on Thursday night when the lights went out, we crept indoors and booted the computer. We could hardly believe what we read. Punxsutawney Phil is a groundhog!

We have groundhogs on our farm. They’re big, furry rodents that dig long burrows in the ground. Some people call them woodchucks and Ozarkians call them whistle pigs, but they’re rodentsānot meteorologists!

We visited theĀ Punxsutawney Groundhog Club website to see what it’s all about. At daybreak on Groundhog Day, Feb. 2 of every year, thousands of people visit Gobbler’s Knob near Punxsutawney, Pa., to watch Punxsutawney Phil come out of his burrow and look around. If it’s a sunny day, he sees his shadow; that means winter will hang around for six more weeks. If it’s cloudy, he has no shadow and spring is just around the corner. Ā

Punxsutawney Phil has been doing this since 1886. That makes him a pretty old groundhog! His handlers, men called the Inner Circle who wear top hats and tuxedos, supposedly give him a sip of magical Groundhog Elixir each summer to extend his life for seven more years. (We don’t believe that, do you?)

In 1993, Punxsutawney Phil appeared with Bill Murray in a movie called Groundhog Day, and in 1995, he flew to Chicago to appear on āThe Oprah Winfrey Show.ā A famous toy company issued a series of Punxsutawney Phil Beanie Babies wearing top hats, bow ties and sometimes capes.

Groundhog Day goes back a very long time. According to the History Society of Berks County, Pa., storekeeper James Morris penned this diary entry on Feb. 4, 1841:

“Last Tuesday, the 2nd, was Candlemas day, the day on which, according to the Germans, the Groundhog peeps out of his winter quarters and if he sees his shadow he pops back for another six weeks nap, but if the day be cloudy he remains out, as the weather is to be moderate.”

Groundhog Day is celebrated throughout the United States and Canada, except in Alaska where it’s Marmot Day because there are few groundhogs in our northernmost state.

And Punxsutawney Phil is not the only groundhog meteorologist. There are lots more, like Buckeye Chuck of Marion, Ohio; General Beauregard LeeĀ  in Lilburn near Atlanta; Staten Island Chuck of Staten Island in New York City; Sir Walter Wally of Raleigh, N.C.; and Smith Lake Jake in Graysville, Ala., to name a few. A girl groundhog called Queen Charlotte reports spring’s arrival (or not), in Charlotte, N.C. Canadian Groundhog Day meteorologists include Wiarton Willie in Wiarton, Ontario; Alberta; Sutton Sammy in Sutton, Ontario; and Shubenacadie Sam in Shubenacadie, Nova Scotia. The list goes on and on.