Did the groundhog see his shadow at your farm on Groundhog Day? He didn't here! 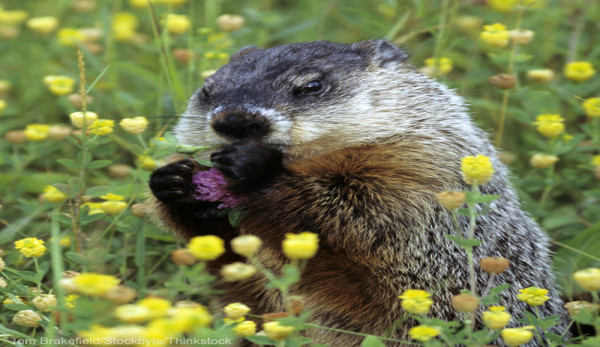 Did the groundhog see his shadow at your farm on Groundhog Day? He didn’t here! It snowed and the wind howled and we were thoroughly cold and discouraged. Winter had better be over soonâ€”groundhog shadow or not!

Long ago, some people decided that if a groundhog sees his shadow on Feb. 2, there will be six more weeks of winter. Cities all over the United States and Canada keep groundhogs on call just for shadow-spotting on Groundhog Day. The most famous shadow-seeking groundhog is Punxsutawney Phil of Punxsutawney, Pa. Some others are Buckeye Chuck of Marion, Ohio; General Beauregard Lee in Atlanta; Staten Island Chuck in New York City; Sir Walter Wally of Raleigh, N.C.; Smith Lake Jake in Graysville, Ala.; and Queen Charlotte of Charlotte, N.C. Canada has Wiarton Willie of Wiarton, Ontario; Sutton Sammy in Sutton, Ontario; Winnipeg Willow in Winnipeg, Manitoba; Fred la Marmotte of Val dâ€™Espoir, Quebec; and Shubenacadie Sam in Shubenacadie, Nova Scotia.

Because there are no groundhogs in Louisiana, down in bayou country, nutrias take their place. Two shadow-spotting Groundhog Day nutrias are Pierre C. Shadeaux of Iberia and T-Boy in New Orleans.

Most groundhogs, however, are simple country animals that like to bask in the sun, raid gardens and dig in the earth.Â

Groundhogs are ground-dwelling rodents belonging to the squirrel family. They’re also called whistle-pigs and woodchucks. Have you ever heard this saying? “How much wood would a woodchuck chuck if a woodchuck could chuck wood?” It doesn’t matter because woodchucks don’t chuck wood. Their name comes from an Algonquin Native American word wuchak, that’s all.

Groundhogs are cute. They have chubby bodies covered with grizzled grayish brown fur; short, powerful legs with thick, curved claws on their front feet; broad heads with short, rounded ears; and flattish, medium-long, bushy tails. They vary from 16 inches to 28 inches in length, tail included, and weigh 5 to 15 pounds. Male and female groundhogs look alike, though males are often a little bit bigger than females.

Groundhogs dig fantastic dens to live in. According to Mammals of the Eastern United States (John O. Whitaker and W.J. Hamilton; Cornell University Press, 1998), a typical groundhog moves 35 cubic feet of earth weighing about 5,500 pounds while building its home. Dens can be 5 feet deep and 60 feet or more long. The groundhog builds one primary entrance and two to five smaller “getaway” holes in case it needs to beat a hasty escape. Some groundhogs build two dens: a big, roomy one for summer living and a smaller one to hibernate in. Groundhogs are solitary creatures and usually live one groundhog per den, but occasionally several share the same digs.

Groundhogs are true hibernators. They stuff themselves with yummy food as autumn approaches and then retire to a cozy compartment below the frost line in their dens. They go to sleep, and soon their heart rate slows so they can live all winter on stored fat supplies.

Groundhogs tend to stay within about 100 feet of their dens but will travel farther to find a mate or procure food they especially like. Groundhogs dine on many types of vegetation, including garden goodies like peas, beans, corn, carrots and lettuce. They also love tree fruit that falls on the ground.

Groundhogs can be a nuisance, but they have their good points too. For instance, their digging helps aerate soil. Also, many other species occupy abandoned groundhog dens, ranging fromÂ foxes toÂ snakes to rabbits toÂ mama tarantulas and even some birds. Groundhog dens help those species survive.Â