This root vegetable can be foraged, but it’s also perfect for container gardening. 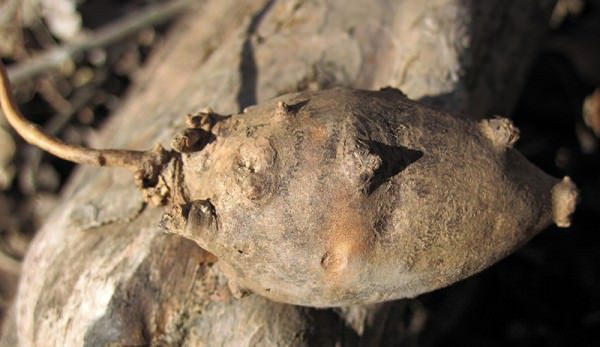 Before the Native Americans and early colonists had potatoes (from South America by way of Europe), they had groundnuts. And I don’t mean peanuts. Groundnuts (Apios americana) are tubers of a legume. They have more protein than potatoes and an amino acid profile similar to beans, meaning that eaten with grains, vegetarians can enjoy a complete set of edible proteins.

Native Americans chose village sites partly to take advantage of natural populations of groundnuts. Foragers can still find groundnuts growing wild in the eastern half of the nation. I am a forager, but I have a confession: I’m too lazy to hunt and dig for them even though they grow right under the soil surface. Instead, I ordered some improved varieties from Oikos Tree Nursery, located in Kalamazoo, Mich., and I grow them in my garden in a very big nursery pot.

Groundnuts are not for a small garden. The rhizomes spread underground, and the vines climb over everything like a miniature kudzu. I grow mine in 25-gallon, black, plastic nursery pots. I fill the pots with garden soil and organic matter, plant two or three tubers, add an inch of mulch, and then ignore them all summer. Groundnuts can take sun or shade and wet or dry conditions, though they’ll produce more with steady moisture and full sun. As legumes, they can draw their own nitrogen from the air, so I don’t give them any fertilizer.

After the first hard frost has killed back the foliage, I cut it away. Then I dump out the pot onto a tarp, and the treasure hunt begins. From my 25-gallon pot, I can usually get 2 to 4 pounds of smooth brown tubers, the size of small chicken eggs. They’re very easy to harvest by hand in just a very few minutes. I then shovel the soil back into the pot, re-plant a couple of tubers, top off the pot with an inch of organic mulch, and leave the groundnuts alone till the next winter, unless a severe drought nudges me to water them.

Groundnuts can be peeled, dried and ground into a tasty flour. I like to roast them in the oven unpeeled and serve them with a lot of butter. (Don’t eat them raw—they’re toxic if not cooked.) Forager Leda Meredith, in her book Northeast Foraging (2014), writes that groundnuts are her favorite root vegetable. She describes the taste as a cross between chestnuts and potatoes. I agree, and I love them, too. In fact, I may just plant them in a couple more pots next season.