Grow An Endless Supply Of Rhubarb

Through divisions, you can quickly grow a pretty rhubarb groundcover that will keep you in pie-mode all summer long. 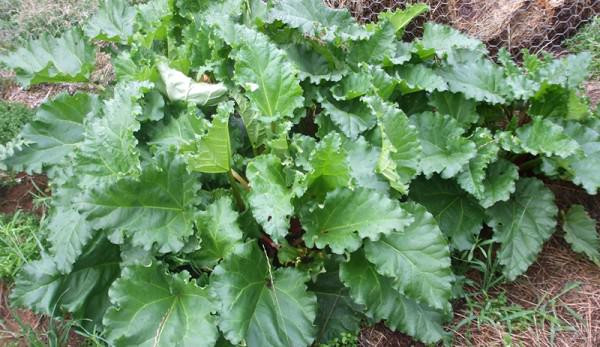 Rhubarb (Rheum rhabarbarum) is one of those plants that usually sits relatively undisturbed in the corner of the garden for years, perhaps occasionally making it to the table in the form of pies or crumblesâ€”that is, when sweet berries that offset its tangy flavor are also in season.

Despite its lush foliage, bold stalks and towering, long-lasting blossoms, this plant is a neglected perennial vegetable and is rarely considered to be an ornamental addition to the landscape. However, because rhubarb is as gorgeous a groundcover as it is an excellent producer of calories and biomass, it should be considered a candidate for larger plantings in gardens both edible and ornamental.

Left to its own devices, a rhubarb plant will slowly colonize an area within a circumscribed range. As it becomes older and more established, it will flower more frequently in an attempt to produce seedling offspring. An older rhubarb plant that flowers frequently is a ripe candidate for divisionâ€”making one large plant into several small ones can result in vigorous renewed growth and an attractive mass planting.

Last year, I divided a single 20-year-old plant into 12 new clumps, and the new root growth on each section was nothing short of amazing. Formerly limited to expanding slowly in one direction, the divisions I planted rapidly started sending large rhizomes every which way.

All that is really needed in order to divide a rhubarb patch is a single â€śeyeâ€ťâ€”or potential leafâ€”with a bit of root attached.

But the vigor of the plant and readiness for next yearâ€™s harvest depends on exactly how many eyes and roots are re-planted together. For an uninterrupted supply of rhubarb, take divisions with five or more eyes instead.

In either case, a single rhubarb older plant can become a patch in no time.

In mass plantings, the broad leaves give an almost jungle-like effect, all while holding competitor plants at bay by shading them out. A rhubarb patch leaves enough for a couple of pies, extras for the neighbors and plenty to add to the compost as biomass to nourish other plants.