Whether you are an avid gardener or a full-time farmer, the reality is that your harvest can only be good if you have healthy soil. 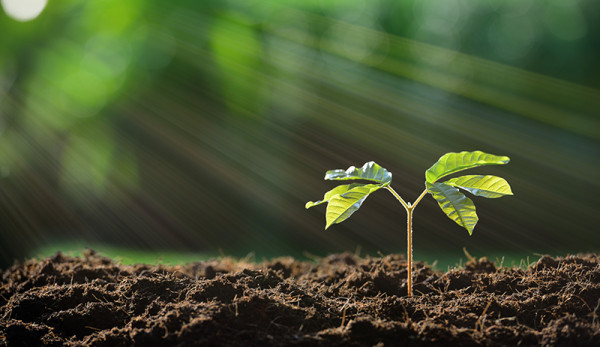 Itâ€™s difficult to grow healthy food in unhealthy soil and raise vigorous livestock on depleted pastureland. Put simply, if we donâ€™t take care of our soils, they canâ€™t take care of us. Luckily, soil isnâ€™t all that difficult to please, so long as you follow the rules. Not only is soil fairly self-reliant, but itâ€™s also reparableâ€”even heavily damaged or depleted soils can be rebuilt. And although there is often a lot of dizzying science involved when people talk about healthy soil, for the most part, itâ€™s not complicated. So long as you know what a soil needs and what harms it, then youâ€™re halfway there already.

Soil is a living, breathing habitat, home to a diverse and exotic range of organisms, each one with its own role in building fertility. Many beneficial bacteria live around plant roots in an area called the rhizosphere and will protect plants from diseases in exchange for different sugars and proteins that the plants create from carbon dioxide. Fungi, another important piece of the soil food web, break down organic matter while often fixing nitrogen or helping living plant roots to locate nutrients.

The healthier your soil is, the more types of organisms it will have. Nematodes and protozoa eat bacteria and fungi. Snails and earthworms eat protozoa and smaller nematodes. In fact, because they are so high up on the soil food chain, if you have a healthy presence of earthworms, beetles, snails and even small vertebrates, thatâ€™s a good indication that you have healthy soil. Moreover, all of these larger organisms contribute to soil health themselves through their secretions and by be aerating the soil through their actions.

Altogether, these organisms help to break down organic matter, create humus ,Â fix nitrogen and regulate moisture. Their importance in the soil, then, simply canâ€™t be overstated. So encouraging and keeping these miniature â€ślivestockâ€ť happy is an important part of being a farmer.

Generally speaking, microbes have a diverse diet. Some bacteria and fungi, for example, require living plant roots for their food. This is one reason of many why cover crops are so important: They keep microbes busy and well-fed while you tend to other things. Other microbes thrive in dying plant tissues and roots, so when the farmer mows a cover crop, those organisms rapidly begin turning the clippings into soil.

We tend to think of organic matter as just leaves, hay or plants that decompose in the soil, and while it certainly is that, organic matter also applies to everything that remains from a living organism. This can be the carbonaceous stalk of the wheat plant, aka straw, the body of an earthworm, animal manure or the dying roots of a broccoli plant. All of these act as organic matter and food for soil organisms.

Humification is the process by which organisms break down organic matter and turn it into humus. Often, humus is confused with compost, but they are both important and unique substances.

Compost is organic matter that has broken down and acts as food for plants, while humus is longer-lasting organic matter used more by the soil for mineral retention, microbial habitat and moisture distribution. They arenâ€™t exactly mutually exclusiveâ€”compost can contain humusâ€”but itâ€™s important to try and encourage both: Add leaves, straw and other organic materials that will break down into humus more slowly directly into your compost piles. This will give you a compost that is beneficial not just to your plants, but to the soil, as well.

Of course, adding dry organic matter directly to the soilâ€”which you can and sometimes should doâ€”will tie up nitrogen, an important nutrient for plants. This means that anytime dry matterâ€”straw, leaves, wood chips, etc.â€”is added to a garden before it has been composted, it should be added at least four months prior to a crop planting, and at least six months before forÂ wood chips. This will allow the organic matter time to tie up the nitrogen it needs to break down and then release it back later in time for the plants to use it.

Loosen Up The Soil

The biggest concentration of soil organisms live around roots, so the deeper your roots go, the deeper those organisms can penetrate and fertilize. If soil is compacted, the roots will have a more difficult time moving deeper down, as will the organisms.

Breaking up compaction can be done in a few different ways. Many farmers use a tractor implement called the subsoiler to go deep into the soil and create furrows below the surface without turning over the soil. On a smaller scale, digging forks or broad forks can be used to crack the hardpan and open up the subsoil. Find the right tool for your scale: one that is not too heavy but that is also efficient for your size of operation. A home garden can easily get away with a digging fork and anything under an acre can likely use a broad fork, but consider a subsoiler or similar implement for anything larger than that.

Beyond allowing for deeper root penetration, having loose subsoil is also a great way to get water farther into the ground, thus encouraging better overall water storage.

Put simply, the pH of something is the measurement of how acidic or alkaline it is. Neutral pH is considered to be a range between 6.6 and 7.3, per the USDA Natural Resources Conservation Service. Anything above that is considered alkaline; anything below is considered acidic. Few soils start out neutral, but thatâ€™s where you ultimately want to arrive.

This is important because if your soil pH is too high or too low, it can lock up nutrients, making them unavailable to the plant, resulting in mineral deficiencies and weaker crops.

Bacteria favor acidic soils and fungi favor alkaline soils, so problems with disease come up a lot when soil pH is not properly balanced. You need both bacteria and fungi to have successful crops, but too much of one or the other can be dangerous. Having a poor pH can affect germination, crop growth, fruiting, health and ultimately your yield. If you do nothing to your soil but add compost and balance your pH, you will still be a better farmer for it.

Generally speaking, areas with more rainfall tend to have acidic soils, whereas drier areas tend to have more alkaline soils, but donâ€™t assume: The only way to know for certain if a soil pH is where you want it is to test regularly. And it can shift slightly from day to day, so a home kit is a good idea.

Once you know the soil pH, itâ€™s time to balance it. In order to balance your soil, there are some things to think about first. Before adding anything, check with your county extension agent, but also bring your soil test to other local and experienced farmers. They may be able to give you advice about how they balanced their soil.

For instance, your pH may be low, but your magnesium levels may be high. If you balance with dolomitic limestone in this case, you may be adding too much magnesium, which will cause other problems. For this specific situation, you should add calcitic lime, which may not be obvious (or even said) in a basic soil test.

More advanced soil tests will give you a wider view of the nutrient and mineral needs of your soil. Neal Kinsey, a soil fertility specialist who owns and operates Kinsey Agricultural Services, a company which specializes in soil fertility management, and others say that by balancing all of your soils micronutrients, you can balance your pH. Those tests, though worth every cent, may cost upwards of $50 each.

If your soil pH is too high, too alkaline, sulfur or peat moss are often recommended for acid. Both of these are great, but in some areas you may be contending with â€śfree lime,â€ť which makes it difficult to alter the pH of a soil at all. Again, talk to as many people as possible before adding any amendments so as not to waste time or money, or harm the soil.

In the end, the best approach to maintaining healthy soil is a mixture of observation, soil testing, care and a dedication to the fact that soil is a living, breathing resource that, if treated accordingly, will never stop producing for you.