Help out honeybees by growing a variety of forage to provide the various essential nutrients a hive needs to survive and thrive. 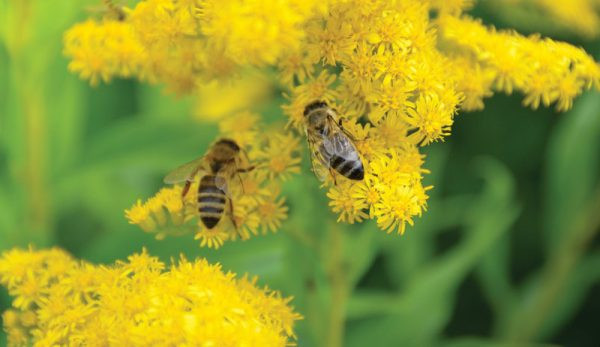 Timing‚Äîand, namely, timely access to good food‚Äîis everything to a honeybee. ‚ÄúPollen is the honeybees‚Äô protein source, and nectar is their carbohydrate source,‚Äù Amy Vu says. Vu is a state specialized program extension agent with the University of Florida Institute of Food and Agricultural Sciences Honey Bee Research and Extension Lab.

Ideally, you should offer a mix of pollen- and nectar-rich trees, shrubs, perennials and annuals that will flower in succession. That means providing some food sources that will pay dividends for your hives long into late fall and still others that will serve them during very early spring.

“There are lots of things that they do with those nectar and pollen resources.‚Äù

For queen bees, that includes laying eggs to build up the requisite population numbers to take full advantage of the coming nectar flow. And, when it comes to pollen, it‚Äôs not just the quantity of available sources that matters. Quality counts for a lot, too.

‚ÄúThose pollen sources that are rich in essential amino acids are really going to be the most useful for honeybees,‚Äù says William Kern. Kern is an associate professor in the department of entomology and nematology at the Fort Lauderdale Research and Education Center of the University of Florida.¬Ý

Honeybees require several essential amino acids, including arginine, leucine, lysine and tryptophan, among others. The concentrations of these amino acids, as well as proteins, found in pollen vary widely depending on plant sources. Such variations in pollen quality can greatly influence a colony‚Äôs spring buildup and overall success.

According to a 2018 study published in the American Journal of Entomology, ‚ÄúPollen containing less than 20 percent crude protein cannot satisfy the colony requirements for its development and optimum honey production. The level of protein in bees‚Äô food significantly affects the amount of brood reared, the protein content of bee hemolymph, the metabolism, and the quality of food for the larvae. Low protein content in pollen also reduces the resistance of honeybees to diseases.‚Äù

Although providing ample forage outside of the summer months can be challenging, the forage we are able to provide just might pack a slightly bigger nutritional punch. After analyzing various pollen types that honeybees had collected over the 2012, 2013 and 2014 seasons, the study‚Äôs authors determined that spring-blooming plants had higher protein contents (21.1 to 27.8 percent) than their summer (13.9 to 23.5 percent) and fall (15.1 to 25.1 percent) counterparts.

Those higher protein levels appeared to give the honeybees a notable boost.¬Ý

‚ÄúThe nutritional value of pollen varies between different plant species and may differ significantly in amino acid composition and/or concentration, and this affects the growth of a bee colony,‚Äù the authors state. ‚ÄúThere is a relationship between the nutritional value of pollen and the development, reproduction and productivity of bee colonies.‚Äù

With so much at stake, how can you be sure your hives have enough natural forage? Offering your bees access to plenty of early-
blooming trees is one of the most effective ways to meet their nutritional needs.¬Ý

‚ÄúFor the eastern U.S., the Midwest and southern Canada, some of your best choices are going to be the maples,‚Äù Kern says. ‚ÄúThey‚Äôre one of the first trees to flower, and they‚Äôre a good choice for pollen.

“The other good pollen source that‚Äôs really early is the willow. As soon as it‚Äôs warm enough for the bees to start foraging, those trees will be flowering. The maples, oftentimes, will flower before they even have any leaves. And the willows will produce their catkins generally before they start leafing out fully.‚Äù

As for herbaceous plants that can perform for bees in late-winter or early-spring, consider cover crops. Vetches or early clovers, as well as plants in the brassica family such as rapeseed, radishes or turnips, just might fit the bill where you live.

‚ÄúMembers of the mustard family are pretty tolerant of the cold weather,‚Äù Kern says. ‚ÄúThey‚Äôre some of the first flowering plants. Even if you want to put out a plot for deer and you‚Äôre going to use things like daikon radish or sugar beets, those would be early flowering. So, as soon as the frost was over, they‚Äôd come up and produce flowers.‚Äù

Because they typically span large areas, cover crops can afford bees at least one extra benefit. Once in bloom, these sections of land provide uniform blocks of color and scent. This makes them potentially easier for honeybees to discover.

So, when adding bee-attracting annual or perennial flowering plants to your landscape, place large blocks of the same plant variety together. This like-with-like planting scheme can give early foragers a much-needed assist.

As Matthew Shepherd and colleagues explain in The Xerces Society‚Äôs Pollinator Conservation Handbook, ‚ÄúIt is preferable to create a block of color with a single species. It is even better to group a single species of native plants, since the blooms of a particular native species will tend to vary little in color. Hybrids, on the other hand, are bred for their colors and often display a vast range.‚Äù

‚ÄúA single pack of lupine seed, for example, may yield blooms of many colors, while native lupines of the same species will all be the same color,‚Äù Shepherd says.

And, although they may not be as showy or varied as their hybrid competition, many nonhybrids are richer sources of nectar or pollen as well. (In fact, ‚Äúpollenless‚Äù varieties are now for sale. While these may make cut-flower bouquets less messy, they aren‚Äôt likely to boost your bees‚Äô protein levels.)

As you think about which flowering plants to add for your bees, consider your growing conditions and your specific needs. Need later fall-flowering plants? You might add a block of New England asters or several different kinds of goldenrod. (There is showy goldenrod, stiff goldenrod, tall goldenrod, late goldenrod and many more.)

Or, if you need more early bloomers, find out which native wildflowers are among the first to pop up in your area and include as wide a variety of those as you can. For instance, known as ‚Äúwhite beardtongue,‚Äù smooth penstemon is one early bloomer that thrives in most U.S. hardiness zones and is native to the eastern U.S. Out west, the California poppy comes on early and is an important pollen source.

Check in with your regional plant association, native plant specialty growers, or your state‚Äôs department of natural resources for extra guidance on your native wildflowers.

You can also plant spring-flowering bulbs‚Äîespecially crocuses and snowdrops‚Äîfor still more early forage. Of course, not all flowering bulbs will satisfy your honeybees.¬Ý

‚ÄúIf you get some of the hybrid irises, they may not be good pollen producers,‚Äù Kern says. ‚ÄúAnd, generally, tulips will produce pollen. But I‚Äôm not sure they‚Äôre really great nectar sources.‚Äù

Certain floral colors will also be more appealing than others. ‚ÄúSpecifically look for flowers that are either white or blue,‚Äù Kern says. ‚ÄúAnd some of the red flowers are OK. If you look at them with an ultraviolet light, they actually have nectar guides.‚Äù

Interestingly, some of the best forage you can provide requires the least amount of effort from you. ‚ÄúIn the old days before we were going from row to row with no-till crops, you had fence rows,‚Äù Kern says. ‚ÄúAnd fence rows had all kinds of plant diversity that would provide food for pollinators, as well as for birds and other things.‚Äù

Land you allow to go a little bit wild can provide a wealth of forage‚Äîforage that can take a beating. ‚ÄúWe have a plant [in Florida]‚ÄîSpanish needles‚Äîthat flowers all winter long,‚Äù Kern says. ‚ÄúIt even tolerates mild frosts.‚Äù

Henbit is similarly tough, albeit under¬≠appreciated. ‚ÄúThat is another early flowering plant,‚Äù he says. ‚ÄúAnd it has a bilateral flower just like mints do. So it‚Äôs attractive to both native bees and honeybees.‚Äù

Even if your own weedy patch is modest, early violets, dandelions, chickweed and other volunteers could thrive in that untended habitat. And its impact on your bees could be sizable.

‚ÄúIf you could set aside even a tenth of an acre, that would be very helpful for the bees,‚Äù Kern says.¬Ý

This article originally appeared in the September/October 2022 issue of¬ÝHobby Farms¬Ýmagazine.