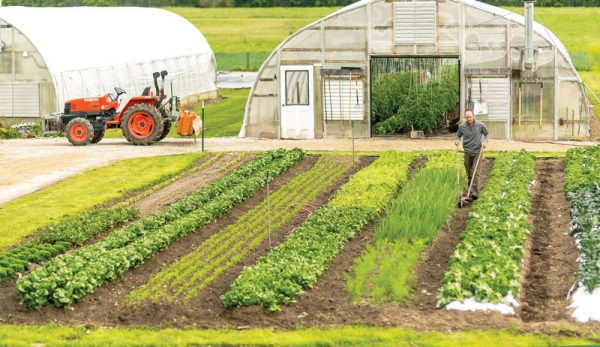 During the past seven years, Ben Hartman and his wife, Rachel Hershberger, have doubled their farm income while cutting their labor hours by half. Their secret: They reduced the number of crops grown and focused on selling their produce within 10 miles of the farm rather than driving for as long as three hours to make deliveries. Scaling back to grow the business might seem counterintuitive, but the coupleās Clay Bottom Farm in Goshen, Indiana, demonstrates that farmers can grow more with less.

Hartman was raised on his familyās 500-acre corn and soybean farm. He recalls then-Secretary of Agriculture Earl Butz proclaiming in the 1970s that farmers needed to either āget big or get out.ā Butz, who served under presidents Richard Nixon and Gerald Ford, promoted the idea that a successful farmer was someone who purchased bigger tractors, bought more land and produced more crops.

āThere was a great deal of pressure to get bigger and do more with more,ā Hartman says. āWhen it came to our small-scale vegetable farm, it just wasnāt working.ā

After purchasing a farm in 2008, Hartman and Hershberger first focused on expansion. They worked as many as 5 tillable acres and four greenhouses.
In 2011, one of the farmās community-supported-agricultureĀ (CSA) customers saw how hard the young couple worked and suggested they consider implementing the lean methods he used at his trailer factory. They embraced the lean method, which originated with Taiichi Ohno, a Japanese industrial engineer considered to be the father of the Toyota Production System, a lean-manufacturing system formed at Toyota Motor Corp. between 1948 and 1975.

Today, the couple farms only a half-acre, half of that in the open air and the other half under cover. They enjoy more time with their family while seeing increased profitability. They sell their food locally to restaurants and cafeterias, at a farmers market, and through a CSA program. āEvery year, weāve gotten smaller, and weāve grown more profitable,ā Hartman says. āWe live by kaizen, a lean production term that means continuous improvement to allow good ideas to bubble to the surface, to allow our farm to thrive.ā

About 300 miles north of Clay Bottom Farm, another farmer is also learning the advantages of incorporating lean processes on his farm in De Pere, Wisconsin. Darren Vollmar has only recently adopted lean methods of maximizing crop production without having to expand the tillable acres at his familyās Ledgeview Gardens, but he says he already notices significant changes. Inside 8,000 square feet of hoop houses, he can grow the equivalent of 20 traditional acres of tomatoes.

āEfficiency pays,ā he says. āWe continue to look for ways to do more with less. To me, efficiency means being able to grow more with less costs, labor and overhead.ā

Operating an efficient farm brings far more benefits than simply producing more food. It can result in less waste, fewer crops rotting in the field because they canāt be picked fast enough, and making the best use of resources such as water and soil.

āRegardless of the scale of your farm, improving efficiencies frees up time for your family or to pursue a new venture youāve been striving for,ā he says.

Plant varieties significantly affect a small farmās ability to produce more volume with fewer resources. Vollmar chooses hybrid crops that are natural crosses with some disease and pest resistance bred into them. āWe are looking for plant performance, vigor and best yield when choosing seed,ā he says.

Deciding where to plant those crops as it relates to the water source also contributes to overall output and is known as hydrozoning. Grouping plants together based on the amount of water they need more efficiently disperses water where it is needed. In areas where plants are not grouped, too much water is applied to ensure all plants the minimum amount needed, and many plants get more than enough, wasting gallons upon gallons.

Japanese lean management practices use the term muda, which roughly translates to āwaste.ā So to cut the muda means to cut the waste. There are 10 types of muda, and Hartman diligently watches for them on his farm. When he spots them, he gets rid of them when possible.

In short, cut back on water while preserving quality. By investing in hydroponics, Vollmar has maximized tomato production without sacrificing crop quality or taste.

āWith hydroponics we are able to be efficient with our water consumption, space and sun,ā he says. āWithin our system we are able to produce an equal amount of tomatoes as someone growing the same fruit on 20 acres of soil.ā

This space efficiency means you can save vast amounts of water, labor and time by using this high-tech growing system.

Barns and sheds can quickly fill up with tools. Auctions or sales at farm supply stores offer tempting opportunities to purchase that miracle tool or piece of equipment that promises to make work easier. Hartman says when he and Hershberger started the farm, they frequented local auctions and stocked up.

āThere is so much commercialization that itās easy to think that one more tool or one more piece of equipment is needed,ā Hartman says. āThat adds up to a lot of stuff that you waste time tripping over or searching through looking for something.ā

The first few years do require some experimentation to determine what is needed, but when the couple embraced the kaizen mindset that included taking a step back and making an honest assessment of the tools being used.

Ask yourself what is the most valuable to you and your goals. Then ask whether the day-to-day activities on the farm line up with those aspirations. For example, if your goal is to raise a healthy herd of sheep but you spend half the day weed eating, lawn mowing and landscaping the property, consider whether those tasks help you achieve your goal of raising healthy sheep.

āMaybe you need to realign your farm so that youāre spending more time on chores that support your goal rather than distract from it,ā Hartman says.

Scaling back to produce more might seem counterintuitive, but thatās just what Hartman is doing. At peak production, Clay Bottom Farm raised more than 80 crops. By taking the doing-more-with-less approach, Hartman and Hershberger have scaled back to 20 crops by choosing ones they can grow well and that customers want. They also evaluated their sales and delivery. At one time, they were driving for as long as three hours to deliver produce; now all deliveries are within 10 miles of the farm.

At Vollmarās farm, the family also raises laying chickens. The in-demand product can be time-consuming to get to market. By adopting the lean mindset, Vollmar has streamlined the process by installing rollaway nest boxes so that the eggs stay clean. āThat way we can spend less time cleaning the eggs before packing them for delivery,ā he says.

Similarly, buying the feed for chickens in bulk has lessened the amount of time running out to buy feed or unloading a delivery truck. Smaller flocks need less feed than larger ones, but even stockpiling for two weeks saves time and travel expenses.

Hartman discusses the concept of pull in his book, The Lean Farm Guide to Growing Vegetables. The premise is to let customersā interests guide your decisions about what crops to grow and at what volume. āInstead of growing too many radishes or raising too many chickens and pushing the excess, produce exactly what customers want, in the amounts they want, when they want it,ā he says.

It does your farm no good to produce 5 acres of carrots if customers will buy only two. āThe excess rots in the field and takes with it the money youāve invested in preparing the soil, planting the seeds and tending the crops with no return,ā he says. āLet your customers’ pull guide your production.ā

It can take years to improve soil fertility. Diligently pursuing activities related to soil health, such as adding nutrients and resting grazing fields, are worth the investment. The traditional stocking rate is two cows or mother/calf pair per
2 acres, and six to eight sheep or goats per 1 acre. Using intensive rotational grazing methods significantly increases the stocking rate.

āI know people who are able to graze six to eight cows to an acre because the grass is so good and the protein is so high,ā Vollmar says. āThatās producing more with less. You have to be committed to following through.ā

The lean manufacturing process started at a vehicle manufacturing plant, but itās equally applicable to farming businesses. By removing waste, listening to customer feedback and building in efficiencies, hobby farmers can more effectively reach their goals. āRegardless of what scale your farm is at, focusing on lean production is all about efficiency,ā Vollmar says.

Hartman agrees that committing to doing more with less can enhance the business and your personal life. āIf youāre working more than 40 hours a week, youāre cheating your family, your friends and yourself,ā he says. āItās easier and more profitable to eliminate waste than making up for it by working more hours in the day.ā

Ben Hartman and his wife, Rachel Hershberger, purchased their farm in Goshen, Indiana, in 2008. After adopting lean production practices, the couple has doubled their farm income.

Today, Hartman shares what they have learned through workshops, speaking engagements and his books. He shared an excerpt from his book, The Lean Farm Guide to Growing Vegetables. This explains the Japanese word for wasteāmuda, or āanything that does not add valueāāand how it can be manifested on small farms.

According to the lean system, actions on your farm that donāt directly add value, such as lawn mowing, cleaning and leafing through catalogs, are considered muda. The Japanese managers who developed the lean system were precise when outlining forms of muda.