Grow Peppers To Spice Things Up At Dinner & Market

Peppers bring color, flavor and sometimes tons of heat to both the dinner table and market stand, so go ahead and grow some in your farm garden. 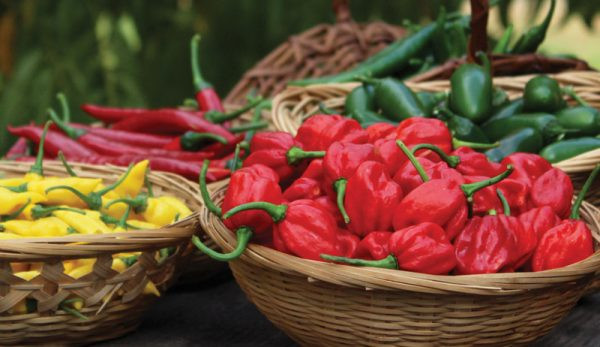 Does your garden selection need spicing up? Peppers can be a great option whether you grow them to enjoy fresh from the garden, store in the pantry or perhaps even diversify your farming operationâ€™s income strategies by selling your produce through local farmers markets or fruit and vegetable stands.

Owned by Donald Hughes, Hughes Produce, located in Dunlap, Tennessee, is a local, family-owned business that has been in operation in the Sequatchie Valley for decades. From spring to winter, they carry a variety of items ranging from fruits and vegetables to Amish butter and cheese.Â

As for peppers, the business sells more of the mild variety. â€śBut even people who donâ€™t like a lot of heat will add a half or a whole hot pepper for flavoring,â€ť Hughes says. Customers of the produce stand use peppers to make salsa, chow-chow, relish and pickles. They also freeze jalapeĂ±o peppers to make poppers on demand.

For those wishing to grow peppers to sell at a local farmers market or produce stand such as his, Hughes recommends packaging peppers in smaller containers. His best-selling peppers are bell, rainbow bell, jalapeĂ±o, cayenne and serrano.Â

Hughes offered the following descriptions of these locally grown peppers.

This is a juicy, sweet, bright red pepper that is approximately 3 to 4 inches in length. This pepper is not a hybrid. Itâ€™s great as a stuffed pepper, for use in chow-chow and as an ingredient in fajitas.

This mild/sweet yellow pepper turns red as it ripens. Approximately 6 to 7 inches in length, it’s a long, narrow pepper known for its large yields all summer long.Â

Use it in salads, pickled, in chow-chow, as a relish and as a popper that is filled with cream cheese and onion and wrapped in bacon. Hughes says that hot banana peppers have less heat than jalapeĂ±o peppers.

Primarily known as a hot pepper variety, new varieties exist that have less heat. Although not seen this way in a typical grocery store setting, these peppers are green or bright red when ripe. They are approximately 2 to 3 inches in length. Most commonly used when cooking Mexican dishes, these versatile peppers are also great for pickling, in chow-chow, in hot sauces, in poppers and more.

A medium to hot chili pepper, this dark green vegetable is usually 7 to 8 inches in length, thick-walled and 2 to 3 inches wide. It makes a great addition to chili.Â

For the uninitiated, their wrinkled appearance may make this pepper seem old. Turning red when ripe, this pepper is about 6 to 7 inches in length. Use it in a hot sauce, for drying or in chow-chow.

This orange and very hot pepper is good in a hot sauce and diced into small bits for an added kick to soups and chili.

This dark green to red pepper has a Tabasco-like flavor and packs a lot of kick into a small package. A 2-inch-long pepper with a narrow shape, serrano grows best in hot climates. Its best uses are for pickling, hot sauces and as a cooking additive.

Dark green in color, this pepper is approximately 6 to 7 inches long with a shape that is wider at the top and tapers to a narrower bottom. It has a mild chili pepper-like taste with a slight kick. Add to a variety of dishes or use in a meat-and-cheese stuffing.

This red and very hot pepper rates close to one million on the Scoville scale (used to rate the heat of peppers). They are surpassed only by the Carolina Reaper and the Trinidad Scorpion. Hughes Produce sells these peppers in cheese at their store, which adds to the overall hotness of its flavor.

A purple, yellow and red pepper that is approximately 3 to 4 inches wide and tall. It is described as being sweeter than a normal green bell pepper. It is good in salads, for cooking, or cut up and eaten raw with a vegetable dip.

Read more: Preserve your pepper harvest with this simple recipe for pickled jalapeĂ±os.

According to Hughes, peppers need at least six to eight hours of sunlight per day. For best results, he recommends using a gradual-releasing fertilizer mixed in the soil weekly throughout the growing season. â€śYou need to use a fertilizer that will give a balanced ratio of the proper nutrients,â€ť he says.

In the absence of a soil test, a fertilizer that covers a broad variety of soil needs is best.

â€śOnce your plants get taller, Epsom salts help your plants by providing them with magnesium and helps them to absorb nutrients more efficiently,â€ť Hughes says. He recommends 1 to 2 tablespoons twice a month.Â

Due to the threat of frost in the Sequatchie Valley of Tennessee, itâ€™s best not to plant peppers before April 15. â€śEven then, there is the threat of a small frost or two, sometimes an even bigger one. But this gives you the earliest chance with a lower risk of a killing frost,â€ť Hughes says.

Peppers planted in April in the Valley are generally harvested June through July.Â

Read more: Protect your garden from freeze and frost with these tips.

Raising peppers most of the time, local producer Gary Swafford of Pikeville, Tennessee, has farmed for more than 50 years. He now farms alongside his son, Cameron.

The Swaffords grow mainly bell, serrano, poblano and jalapeĂ±o peppers, choosing these varieties based on customer demand. They primarily sell their peppers straight out of their packing shed located on their farm but also ship to Florida as well as selling to local stores.

For local customers, the father-son pair also have a â€śyou pickâ€ť opportunity.

Peppers at the Swaffords’ farm are sold loose, while those shipped to Florida or sold in local stores are wholesaled in bushel boxes. Most of their customers use their peppers for making salsa, canning and cooking. â€śThe jalapeĂ±o peppers are good for salsa, while the poblanos are good for stuffing,â€ť Swafford says.

Swaffordâ€™s biggest piece of advice for those considering growing peppers has less to do with uses and growing recommendations than it has to do with choosing a phytophthora blight-resistant variety.Â

Where should you go to get quality peppers now that you have decided to grow them or perhaps make a change to your current pepper gardening routine? Local farm-supply stores and garden centers make excellent options.

The Barn Nursery in Chattanooga has supplied local growers since its inception. Stores such as this one can help you select the best varieties and plants for your needs and area of the country. They can also advise you as to local pepper trends. Awareness of such trends can ultimately increase your profitability by allowing you to grow one or more varieties of in-demand peppers.Â

For example, David Spurling, manager of the garden center at The Barn Nursery, has recently seen an increase in the demand for hot pepper plants, which he believes is thanks to the growing popularity of television shows and YouTube videos featuring guests and hosts eating increasingly hot peppers for entertainment.

Aside from trends, Spurling advises choosing a pepper variety that grows best in your particular climate. â€śThey like the heat and humidity,â€ť he says. â€śPeppers do well here.â€ť Spurlingâ€™s favorite pepper to recommend is the Giant Marconi.

â€śThey are three or four times larger than a regular bell pepper and great for grilling, stuffing or eating raw,â€ť he says.

For growers just getting started with peppers, start with plants versus seeds. â€śThey are easier because they are ready to go,â€ť Spurling says. The only downside of starting with plants versus seeds is that, when shopping from catalogs versus stores, you usually have a greater variety to choose from. To compensate, Spurling advises planting half of your crop in plants and the other half in seeds.

Regardless of whether you choose to start with plants, seeds or some combination of the two, for volume, choose a variety that produces a larger number of peppers per plant to grow.

However you decide to get started, the variety you choose to grow, or how you decide to enjoy their production, peppers can make a great addition to your garden.Â