Grow, Pick & Enjoy Some Peppers In Your Next Garden

You don’t have to be Peter Piper to grow and enjoy peppers of all varieties. Here are some pointers to keep in mind when choosing varieties for your garden. 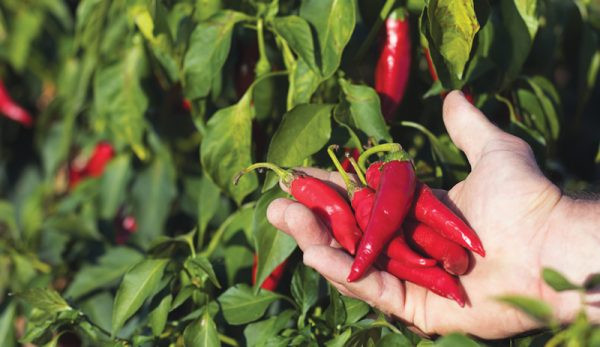 If I had to choose just one vegetable to grow, it would be a pepper. Peppers are consistently one of my favorite garden staples and for good reason: From a culinary standpoint, they’re hard to beat. They provide flavor and heat to any dish and are represented in many spices and blends.

In any given year, I typically grow around 100 pepper plants. This gives me plenty of variety to use in the kitchen, grind into spices and have available for trading.

Which Peppers to Grow?

Peppers come in different sizes, thicknesses, colors—green, yellow, orange, red, brown—as well as a range of flavors and heat. It’s the latter that receives the most attention, and even seed catalogs typically separate them into sweet and hot.

Capsaicin, which is prominent in the seeds of the pepper, is the chemical compound responsible for the heat, or intense burning sensation, depending how hot the pepper is.

The amount of capsaicin in a given pepper is measured using the Scoville scale—named after Wilbur Scoville, an American pharmacist who devised a test for pepper heat while working at a pharmaceutical company in 1912. Knowing the range of heat that you’re comfortable with is the first step in determining which peppers you should grow.

One year, I tried habaneros, which typically range from 150,000 to 300,000 Scoville units. I also grew mustard and chocolate varieties. My then-3-year-old son discovered them in the dehydrator.

Being accustomed to seeing apple slices in the dehydrator, he helped himself to one of the mustard habanero slices. Suffice to say, it was not the result he was anticipating.

When I break into a sweat just by eating a pepper, even I have to admit that 300,000 Scovilles might exceed my range of comfort. I’ve learned to stay well below that. Once you establish your range of acceptable heat, it becomes mostly about flavor.

There are a great many varieties available, so feel free to experiment! When the seed catalogs arrive, I skip past everything else and go straight to the peppers. Each year, I choose at least one new variety to try.

You’ll find hybrid and open-pollinated varieties. Hybrids will sometimes have better disease resistance and higher yields, but you’ll be unable to save seeds. For that reason alone, I prefer open pollinated.

If you have a cooler climate—peppers love heat—or a shorter growing season, you’ll have to take that into account.

I live in Kentucky, and our growing season is pretty good. With an early start on a heat mat and growing hot peppers for transplant, I have enough of a season to grow most varieties. Here are some of my personal favorites:

Mildly hot, this pepper ripens from light green to yellow, deepening to orange, then to red. I use these on pesto pizza or add them to our tomato base, among other things. They make a great addition to a breakfast dish as well—potatoes, onions, garlic, Hungarian hot wax peppers and eggs. (Seriously, try it!)

This one is great for pickling, for use in jam and for dehydrating for a salsa blend spice.

This prolific pepper is great for adding to salsa.

For pap­rika, we grow these two varieties and combine them. They have a sweet and slightly spicy taste; you’ll never go back to store-bought paprika after growing these peppers yourself.

This pepper is my benchmark for heat. I generally grow peppers around that range on the Scoville scale. Paprika and cayenne are mainstays in my garden plan. The reason for this is simple: Both are used frequently in my family’s favorite spice blends.

Read more: Want to bring the heat? Ghost peppers are Carolina Reapers will spice up the garden!

You can certainly purchase pepper plants instead, but I prefer to start from seed. There is nothing quite like pursuing a seed catalog in winter, a blanket of snow on the ground and dreaming of what you’ll grow in the spring.

I start my peppers indoors and then transplant. My family put shop lights and LED grow lights that we had built ourselves and had running off-grid over a propagation table. Pepper seedlings are particularly susceptible to diseases, so going with peat pellets to start or a soilless potting mix is something to consider. Keeping the plants separated is also a way to keep diseases from spreading.

A heat mat is almost a necessity, as peppers like a relatively high soil temperature for germination. Around 77 degrees Fahrenheit (75 to 95) soil temperature is a good spot, regarding both percentage of germination and the number of days for the seeds to sprout.

You can grow in pots or a good garden plot with proper spacing between the plants. It’s typically recommended to give them 18 to 24 inches. I like to add spacing beyond what is recommended in the rows so that I can walk and pick.

I find growing peppers to be insanely easy. They require plenty of sun, love warm weather and require a consistent amount of water. Peppers want to be on the drier side as opposed to overwatered. I rotate the pepper plot, but always spread goat manure into the garden space each year. The soil should be deep, rich and loamy.

Pepper’s nutrient requirements are high in nitrogen, potassium and phosphorus. As with tomatoes, too much nitrogen can cause the plant to grow really well, but not fruit properly. Peppers love warmth and are susceptible to cold temperatures, so you’ll want to wait until you’re well past the danger of frost. As I grow mine from seed indoors, that also means that I’ll be transplanting them. I gradually expose them to outdoor conditions, as it will mean they are less stressed when they’re planted.

As they start to grow and develop flowers, pinch off early blossoms. It will allow the pepper plants to direct their energy into growing first and fruiting later. Don’t worry; you’ll be rewarded later!

You’ll need garden stakes of some kind. If the conditions are right, you’ll get highly productive and top-heavy plants. I find the smaller T-posts to work great as the stakes.

Pepper flowers are called “perfect flowers.” They are self-pollinating. The seeds they produce are pure and produce the same pepper type. Because we have insects, cross-pollination is also common.

Commercial growers use distance to isolate the plants; 500 feet is usually considered sufficient for seed purity. However, because don’t work on the same scale of seeds needed commercially, we can use other methods.

You can isolate a single plant using a screen cage. The materials you use to surround the plant include nylon screen, which you can buy at building-supply stores, or spun polyester.

Individual pepper flowers can also be bagged. Leave the netting on until the peppers have fully formed and are ripe for picking.

Peppers are ready to be harvested and processed when they’ve reached maturity. Select the larger ripe peppers, which show no signs of disease. Avoid collecting seeds from the first few peppers, which might be smaller than later ones, and avoid seeds from the last peppers of the season, which might have lower germination rates than midseason peppers.

Small, thin-fleshed peppers can be air dried easily, then crushed when they are dry to separate the seed. Larger peppers need to be cut open to expose the seeds, which you scrape off.

If you work with really hot peppers, wear latex gloves while handling them. If you’ve ever cut open a hot pepper and then rubbed your eyes, you know what I’m talking about.

Lay them out on a paper towel, which wicks moisture, or a coffee filter to let the seeds dry, and keep them out of direct sun. When they are sufficiently dry, the seeds must be stored. Seeds are generally viable for two to three years if you keep them in a sealed canning jar and store them in a cool place.

I knew someone who placed the seeds in a labeled, sealed envelope with a pack of silicon gel desiccant, then placed them in airtight plastic containers and stored in the refrigerator. He had seeds 18 years old that still germinated using this method. Seed banks vacuum seal them and store them in a freezer, where they are viable for 50 years. For my purposes, three years is fine.

Read more: Here are 5 ways to store your garden goods that don’t involve a canner.

We use peppers fresh while they’re in season, but the main reason we grow so many pepper plants is to replenish our spice cabinet and have extras to trade.

Cayenne and paprika also happen to be frequent ingredients in many spice blends we make, including sausage seasoning and creole seasoning. Georgia Flame and Jalapeño make a great blend and fantastic addition to salsa. Many peppers and combinations exist, so experiment and see what you like.

For dehydrating, we use a 9-tray dehydrator for everything. To start, wash the peppers and cut them to a size that fits on the trays. It’s a matter of personal preference as to whether to leave the seeds in.

Depending on thickness, some might be ready before others. In that case, just remove the peppers that are finished and continue dehydrating the rest. You’ll know that the peppers are ready when they are brittle enough to crush between your fingers. At that point, I put the dehydrated peppers into quart or gallon canning jars with lids until I’m ready to grind them.

For grinding the dehydrated peppers, I use a blender. You can often find these cheap at yard sales. With the type I use, the threads on the base match regular-mouth canning jars. I take a quart-sized jar, cram it full of dehydrated peppers and grind the peppers until I can see no larger pieces.

We’ve covered how to get started with peppers, beginning from seed, growing and harvesting, saving seed and grinding them for spices. Now for the fun part: Choose some varieties that interest you, and get obsessed with growing great peppers.

This article originally appeared in the May/June 2019 issue of Hobby Farms magazine.

Dan Adams is an instructor with Steader.com. He lives and farms with his family in Kentucky.