Take the difficulty out of potato growing by using this method that will maximize your limited time and space. 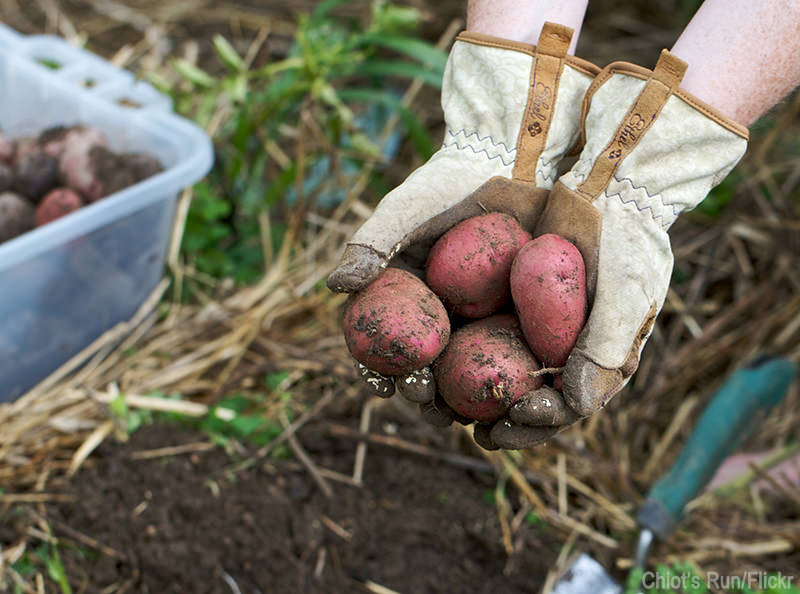 As you think about squeezing in tomatoes, cucumbers, beans and spinach into your backyard garden, you might avoid adding potatoes to the mixâ€”not only because they require a large amount of real estate but because amending the soil to a friable tilth that will support the growing tubers can seem like a nightmare. While barrel gardens are always an option, they can be expensive and unmanageably heavy. So what are you to do if youâ€™re craving the flavor that only garden-grown potatoes can produce?

Both the Irish and Incas used a traditional “lazy bedâ€ť method to grow potatoes in small spaces with minimal time and effort. In the modern-day version of the lazy bed, a plot of soil is lightly cultivated and seed potatoes are planted a couple of inches deep in the soil at 12-inch spacing. Once the potatoes sprout, theyâ€™re covered with a thick layer of mulch.

This method eliminates mounding and weeding after sowing, allows for closer spacing and makes harvesting a snap; just pull back the mulch and pick out the potatoes. The mulch provides the added benefits of conserving water and adding organic matter into the soil.

Potatoes are from the Solanaceae (nightshade) plant family, which also includes tomatoes, peppers, eggplant, petunias and tobacco. The enlarged, edible portion of the potato plant is called a tuber, and it develops underground on stems called stolons.

Potato growers use a tuber piece containing at least one dormant bud (commonly called an eye) that will sprout to grow each potato plant. These tuber pieces are called seed potatoes or seed pieces. The aboveground portion of the plant grows from the bud on the seed piece, and new tubers form belowground on the stolons when the plants are 6 to 8 inches tall. Many potato varieties develop flowers and fruits on the aboveground potato plants, but these parts are not edible.

For best results, only purchase and plant certified seed potatoes, which come from a known variety grown under strict conditions to produce seed tubers that are virus- and disease-free. This ensures disease-free plants and good yields. Potatoes from the grocery store should not be used for planting. Grocery store potatoes have generally been treated to prevent sprouting and will not produce well. 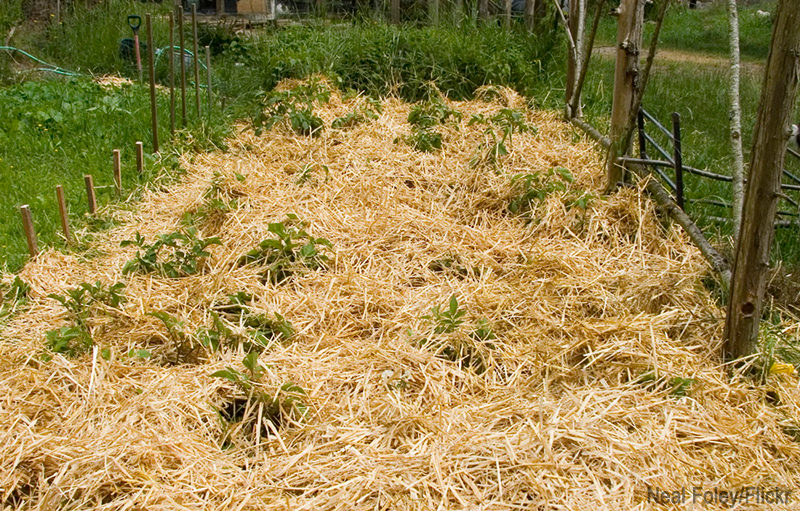 To use the lazy-bed method, designate a rectangular plot thatâ€™s a convenient width to reach across and as long an area as you wish to plant. (Mine are 4 feet wide.) Cultivate the bed to loosen the soil several inches deep, and work in a generous amount of well-composted manure or compost. If heavy rains are a problem in your area, raise the prepared bed slightly to encourage drainage and prevent potatoes from rotting.

If possible, donâ€™t plant potatoes in the same spot where potatoes or other nightshades have grown in the last three years. Rotating crops can dramatically reduce the risk of disease and pests. While potatoes can be grown on marginal soils, theyâ€™ll produce larger yields in fertile soil. Aim for a soil pH between 5.5 and 6.0. Above that may increase the incidence of scab on tubers, so avoid amending with lime or fresh manure the year you grow potatoes.

For the 12-inch lazy-bed spacing, choose potato varieties that set a few large tubers, rather than many smaller tubers. Also, choosing shorter-season varietiesâ€”those that mature in 70 to 75 daysâ€”will help you maximize your use of space and allow you to harvest before pests, disease or weather becomes a problem. That being said, have fun with your selections and try something new! Growing multiple varieties in a lazy bed is fine; thereâ€™s no need to limit the varieties being grown.

Pre-sprouting seed potatoes can help shorten potatoesâ€™ time to maturity by about two weeks. Begin about four weeks before your expected planting date and warm the seed tubers to 65 to 70 degrees F in the dark for about a week. When sprouts appear, expose the tubers to light and lower the temperature to about 50 degrees F. The light will turn the sprouts green and keep them short and sturdy for planting.

Small seed potatoes can be planted whole, but larger potatoes should be cut into smaller pieces before planting. The ideal seed potato weighs 1 to 2 ounces with two or more eyes. Larger seed potatoes can be cut into several pieces, but each piece should always contain at least two eyes. After cutting, the seed pieces should be warmed to room temperature for 48 to 72 hours prior to planting, allowing the cut surfaces to heal, reducing the chance of rot.

Plant potatoes when soil has warmed up to at least 50 degrees F, and plant the warmed-up seed pieces after the risk of hard frost has passed. Place your prepared seed potatoes, cut-side down, 6 inches from the bed sides and 12 inches from one another other in the bed. For example, in a 3-by-8-foot bed, you could place three seed potatoes across and seven down the bed for a total of 28 plants. After the seed potatoes are in place, bury them 2 inches deep in the prepared bed and wait for the potato sprouts to emerge through the soil.

Once sprouted, carefully cover them with a 12- to 18-inch layer of mulch, such as straw or hay. Keep the mulch loose enough to allow the potatoes to grow through. It will pack down gradually, but make sure itâ€™s thick enough that the forming potatoes will never show through. If the tubers come in contact with sunlight, theyâ€™ll become green and form glycoalkaloids and should not be eaten.

As the tubers mature (tubers usually begin forming when the plants blossom), you can reach in and sneak new potatoes any time, but thereâ€™s very little work needed until harvest time. You should be on the lookout for pests such as potato beetles and make sure that the tubers get an adequate amount of water, about 1 to 1Â˝ inches, especially in their early days.

Harvesting lazy-bed potatoes couldnâ€™t be easier. Wait until the potato vines have shriveledâ€”at this point, the potatoes arenâ€™t getting any bigger below the mulchâ€”then pull back the mulch and pick out the potatoes. Dig down into the soil a bit to make sure youâ€™ve gotten all of them, and check the mulch for any hidden spuds.

After harvesting, let the potatoes cure for a few days in the dark to allow their skins to toughen, then move them into storage. Potatoes that will be used within a month can be stored at room temperature. For long-term storage, store in a dark place with good ventilation thatâ€™s approximately 40 degrees F and between 85 and 90 percent humidity. Light exposure will turn the potatoes green and inedible; higher temperatures will cause them to sprout; and inadequate humidity will cause them to shrivel. However, if kept in the right conditions, they can last up to six months.

About the Author: Lesa Wilke is a freelance writer and co-owner of Bramblestone Farm in northeastern Ohio, where she raises chickens, goats, honeybees and produce. You can follow her farm exploits on her blog “Better Hens and Gardens.”