Grow These Tasty Plants In Your Chicken Run

Your chicken run can provide plenty of nutritious plants for your flock, so check out these flavorful, shade-producing plants you can start growing today. 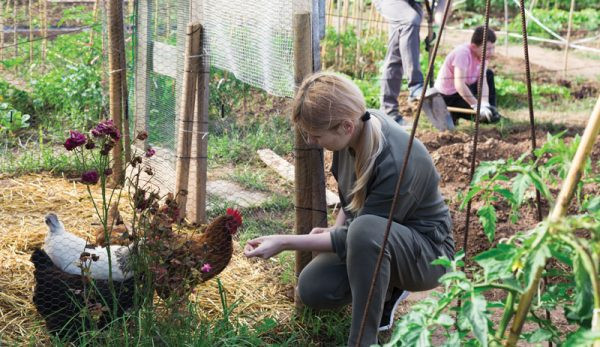 To be honest, my wife Elaine and I didnâ€™t plan to raise wild blackberry vines in our two chicken runs. What began as a single plant popping up randomly in a chicken run has grown into a veritable thicket of viny plants that now thrive in both of the runs where we raise heritage Rhode Island Reds.Â

Several years ago, our annually broody hen Mary established her nest in one of the coops. When that happens, we sometimes turn one henhouse into a chick nursery, moving the other hens and roosters into the second one. The previous year, one of the chicks had somehow found its way out of the chicken run and into our yard, causing Mary to sound the distress call. This, in turn, sent me and Elaine bolting into the backyard.

We reunited Mary with her offspring and immediately proceeded to chick-proof the perimeter by establishing green plastic fencing all along the inside perimeter. The fencing possesses very small openings that not even day-old chicks can squeeze through. At the upper end of the run, the fencing was several feet from the outer perimeter.

That was where the first blackberry vine began to grow.

Like many other members of the Rubus genus, the blackberry species sends forth canes their first year. Then the spring and summer of the second year, blackberry vines produce berries that turn green, then red and finally black when they become ripe.

By that second year, the blackberry plant vines were growing profusely inside the fencing and had even begun to spread throughout the upper third of the chicken run. In effect, they had escaped and started to flourish outside the green fencing. We even had to cut the vines back from the henhouse as their thorns scratched us when it was time to clean it.

Elaine and I are enthusiastic gathers of various wild edibles, and we have an annual summer goal of picking 10 gallons of wild raspberries, dewberries, wineberries and, of course, blackberries. So we were quite thrilled that we had another source of this wild fruit that isnâ€™t only tasty in such treats as pies, cobblers, muffins and pancakes but also a true health food.

Blackberries are high in vitamins A, C and K; serve as an antioxidant; and provide fiber, too.Â

The lush growth of the blackberry thicket also presented two other benefitsâ€”these to our chickens. The runâ€™s henhouse often becomes rather hot in the summertime, but because of the abundance of vines and their leaves, quite a bit of shade now exists over the structure. Rubber netting covers the top of both runs, and the vines inched their way through the netting and seemed to grow even more vibrantlyâ€”a type of trellis effect.

In southwest Virginia where we live, blackberries are ripe for about three weeks in July. Our thicketâ€™s second benefit was to provide a healthy source of food for our chickens during that time. Every day when Elaine and I would enter the run to pick berries, our chickens would gather under us, no doubt hoping they would be the beneficiaries of dropped or dislodged fruit.Â

Indeed, every morning every chicken would leave the run and immediately head to their blackberry vines on the odd chance that fruit had fallen overnight. Many times, our birds found quite a few berries had dropped from their vines. During the course of July days, when we would gather eggs, we would also shake the vines to give the chickens â€śtheir vitamins.â€ť

For several weeks after we stopped picking berries, our chickensâ€”not as peculiar as Elaine and I are when it comes to the ripeness of fruitâ€”would eagerly consume dry, shriveled blackberries when they fell.

All in all, our blackberry vines provided treats to our birds for some five weeks, and cooling shade throughout the late spring, summer and early fall. If you donâ€™t want to chance wild blackberries appearing randomly in your run, consider buying some domestic plants. Just fence the young plants so your chickens wonâ€™t be tempted to dig around them.

Read more: Keep these 14 toxic plants away from your chickens.

Before I cover other plants that can flourish in runs, chicken enthusiasts should first know that some flora should never be allowed to become established. Indeed, contrary to what many readers might believe, some plants are able to easily establish themselves in a chicken run with no help from us humans.

Two good examples of this are curly dock (Rumex crispus) and ground ivy.Â

In fact, curly dock is perhaps one of the worst plants to grow anywhere near chickens. This invasiveâ€”native to Africa, Asia and Europeâ€”features leaves that are toxic to horses, sheep and cattle and produces great amounts of seeds toxic to chickens as well.

Folks can identify dock by the curly, wavy green leaves that can grow as long as a foot. When dock becomes older in late summer and early fall, it will send up a flower stalk that will soon be covered with scores of seeds. Donâ€™t let the plant grow that old because of the poisonous nature of the seeds.

Unfortunately, curly dock is very difficult to remove. If you try to just pull it up, the long taprootsâ€”which are reputed to grow over a yard longâ€”will just break off and soon regenerate. A glyphosate-based herbicide will kill dock and its taproot, but spraying chemicals on plants in a chicken run is never a good idea.

The best approach is to use a shovel to dig deep and remove the entire plant.

Another insidious plant that can appear in runs is ground ivy (Glechoma hederacea), also sometimes called hen penny. This scourge features scalloped leaves about an inch wide and attractive purple flowers. Joanne Yousten, a soil conservationist for the United States Department of Agriculture, told me that ground ivy is almost impossible to remove from a yard once it becomes established.

I have certainly found that to be true. Ground ivy first appeared in our yard about five years ago and now blankets almost the entire lot.

Of course, this European invasive found its way into the chicken run, and our birds wonâ€™t eat the plants despite the nickname of hen penny. They will scratch around it, but as I learned one summer, a small patch of the stuff survived the best efforts of our chickens to eliminate it. I finally pulled up the ground ivy and hurled it into the forest that borders the run.

One last warning: Donâ€™t leave this plant where youâ€™ve pulled it up. Iâ€™ve had plants â€śre-rootâ€ť themselves after a rain.

Plants You Do WantÂ

One of the premier plants that you can grow within your run is lemon balm. And like our wild blackberry plants, I learned this by accident.

Our garden borders the second of our two runs, and Elaine and I planted a single balm slip as a way of providing an excellent pollinator for our tomato, squash and other vegetables. That one lemon balm plant quickly grew and spread, so much so that plants made their way through the fencing separating the garden and chicken run.

It was then that I did some research and found that not only was lemon balm an excellent pollinator, but it also is reputed to repel insects (think flies) and rodents.

Lemon balm leaves are also presumed to serve as stress relievers for chickens. Just scatter the leaves in nesting boxes.

Our lemon balm grows best amid the fencing between the garden and chicken run, but weâ€™ve also seen it appear on its own when weâ€™ve planted clover in our runs. (Read â€śGrow In-Run Cloverâ€ť sidebar, below.). Although chickens will scratch around lemon balm, they donâ€™t seem very interested in the leaves.

Other Plants to Liven up a Run

Other plants that have similar qualities to balm in terms of discouraging pests include lavender, dill and catnip.

The typical chicken run features barren ground, and chickens moving about scratching and searching for plants and other food they are unlikely to find unless some grasshopper or other insect happens to blunder into the enclosure. You can change the entire ambiance of the place with some creative fencing and knowing what type of plants you can establish.Â

From my experience, when chickens forage in our yard, they target clover the most. When my wife Elaine and I first started raising chickens, we tried planting clover seeds in our run, but our birds immediately ate the sprouts as soon as they appeared.

Undeterred by this failure, we devised a solution that involves periodically fencing off approximately 5-yard-long, 3-yard-wide sections of our run with the aforementioned green fencing.

After we finish fencing, we wait for a forecast of rain. The day before predicted precipitation, we use a rake to loosen soil, next broadcast clover seeds, then cover them with a thin layer of soil.

Young growth usually appears in a week to 10 days, and we allow our clover patch to grow for about a month more before removing the fencing. Of course, the chickens usually decimate the patch in a week or so. But meanwhile, we have moved the fencing to another section of the run to begin the process anew.

Chickens possess an amazing ability to quickly decide whether a plant is edible or not. They also have no trouble remembering where these plants thrive.

For example, both my runs reside on a slight decline that over the years has resulted in manure washing downhill where it has accumulated at the lower ends. This has resulted in some very rich soil where chickweed, dandelions and broadleaf plantain now grow in great profusion for much of the spring, summer and early fall.

Every time we let our birds out to forage, they quickly head for this trio of plants. And on days when we donâ€™t let them outside, Elaine and I will often pick up handfuls of these plants and either toss them into the runs or poke them through the fencing so that our chooks can engage in a flurry of feeding activity.

Also of note is that chickweed, dandelions and plantain are outstandingâ€”and nutritionalâ€”plants for us humans to include in salads or egg dishes. Of course, we donâ€™t consume any plant that grows adjacent to the run, but ones that thrive nearby are certainly fair game.