Grow These Crops During The Holidays

The onset of winter can be a dreary time for gardeners, but these two crops will give you something to smile about. 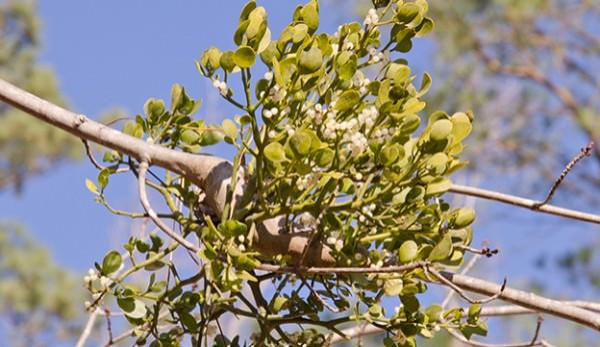 As winter sets in, plant growth slows down. But for the farmer who wants to keep his green thumb in shape or make a little extra money during the holidays, there are a few plants that can fill the winter gaps and look good while doing it.

A single clump of mistletoe can grow to be 5 feet wide and weigh 50 poundsāthat could lead to a lot of kissing! More importantly, with a wholesale market price of $10 per pound, a clump that size could bring in $500. Cut into 25 sprigs per pound and sold for as much as $5 per sprig at the farmers market, that clump could yield a gross income of $6,000. (Bringing home that much cash could lead to lots of kissing, too!)

To propagate mistletoe, harvest the white berries when theyāre full and mature in late winter/early spring, and lightly smash them onto a branch of no more than 1 inch in diameter with very smooth bark. You need male and female plants, and germination may be spotty, so apply dozens of seeds. The sticky flesh will hold the green seedāgreen because itās already photosynthesizingāon the bark until the seed germinates and plunges a root of sorts through the thin bark. Wait four years for harvestable sprigs. They will regrow after clipping.

Although I havenāt tried it myself, Iāve heard that you can get 100 percent germination by putting the ripe berries in your mouth to separate the seeds. The saliva supposedly helps with germination, which makes sense: In nature, birds eat the berries and then wipe the seed from their beaks onto branches or eat them whole and defecate the seeds out onto branches. Jonathan Brigg, author the colorful blog “Mistletoe Diaryā (www.mistletoematters.wordpress.com), shares more info about growing, harvesting and selling mistletoe in England, where it has a well-developed market.

The Latin name for the American mistletoe variety, Phoradendron serotinum, means “tree thief.ā Mistletoe is often called a parasite because it steals water and nutrients from the tree, but because it goes through photosynthesis to create its own sugars for growth, itās really only a hemiparasite. While mistletoe will slow the growth of the branch it lives on, it doesnāt want to kill the treeāthat would be horticultural suicide.

In North America, below a line roughly from New York City to San Francisco, three subspecies of mistletoe grow on more than 100 tree speciesāmostly hardwoods in the east and conifers in the west. Many foresters have advocated the removal of mistletoe, but that philosophy has been as wrong-headed and as ineffective as American forestryās previous philosophy of putting out every single forest fire: Our forest ecosystems need things such as fires and mistletoe to truly thrive. Several hairstreak butterfly larvae can only survive on mistletoe, and more than 100 species of birds, including bluebirds, flickers, woodpeckers, robins and cedar waxwings depend on mistletoe berries to survive the winter.

Savvy hobby farmers may find that a flush of mistletoe helps them survive the winter, too. I found dozens of low-hanging clumps of mistletoe on a honey locust in my neighborās front yard. With their permission and a borrowed pole pruner, I harvested about 5 pounds (three medium garbage bags) in half an hour and took them to an acquaintance at a local gift shop. She bought two bags for $60, and I gave the rest to friends. I hung the prettiest sprig in our kitchen; when my wife, Chris, came home, she said: “If you need mistletoe to get a kiss, you must be in trouble.ā

My father grew up on a Depression-era tobacco farm and loved to tell the Christmas story of how he and his eight brothers and sisters would run to the fireplace in the morning to empty their stockings of oranges and dimes. Back then, a dimeāaccording to my fatherāwould cover the cost of movie, as well as popcorn, candy, a soda, a comic book, a bag of marbles, a haircut and a puppy. (I may be misremembering some details of the story.)

The main takeaway is that fresh oranges and other citrus have been a high point of winter for a long time. But residents of subtropical areas of Florida, Texas and California arenāt the only ones who can enjoy homegrown citrus. For a couple of decades, Iāve kept a portable orchard of dwarf citrus trees in pots: a clementine tangerine, a calamondin sour orange, a Meiwa sweet kumquat and a Meyer lemon.

I purchased most of my dwarf citrus via mail order, and I grow them in big, square, 14-inch-wide pots that I wheel into the house with a hand truck after Thanksgiving. Then, they go back out to the garden in March, once the temperature promises to stay above the mid-20s. They spend the winter in front of a large, sunny, west-facing window. Their fruit ripens and they set fragrant flowers while theyāre indoors. Since theyāre evergreens, we forgo setting up a Christmas tree and garnish our indoor citrus grove with ornaments.

I use a homemade peat-free potting soil of half compost and half pine bark as my growing medium, topping off each pot annually with a handful or two of organic fertilizer. To minimize my time spent watering, they each have a permanent mulch: Some get Mexican beach pebbles set on edge for a lovely texture, while others have wine corks standing upright and packed in tightly shoulder-to-shoulder like soldiers so they donāt float around when I water them. Organic fertilizer flows easily down through the gaps in the pebbles and corks when I water them.

Citrus treesāwhether indoors or outdoorsādonāt need pruning except to control size, if necessary. They rarely have pests, but it may be wise to spray for insects with a soap-based insecticide a week or two before bringing them indoors.

I also grow a high-dollar citrus tree outdoors in the ground called a yuzu. I live in zone 7a, which roughly runs from Long Island, N.Y., to Little Rock, Ark., through the southwest and up the West Coast. Points south of that line can easily grow a yuzu unprotected outdoors. The Japanese revere this treeās lemon/lime/orange combo fruit for making ponzu sauce, which is a sort of vinaigrette, for cooking. In San Francisco, single fruits sell for $2.50 and a quart of juice sells for $60. Our yuzu has survived two tough winters in the high teens with only some leaf damage. Itās too young to set fruit yet, but I think weāll get some next winter.

Stan McKenzie, aka Stan the Citrus Man, of McKenzie Farms in South Carolina, grows yuzu and a number of hardy citrus trees in the coastal plains. You can mail order any of a dozen hardy citrus that will stand up to winters in the low teens, such as Ten-Degree Tangerine, Bloomsweet Grapefruit and more. He also offers the Thomasville Citrangequat, which has a kumquat/orange flavor and is hardy to 5 degrees F when established. Browns Select Satsumaās melting sweet flavor is probably his favorite of all the satsumas.

If youāre willing to protect your in-ground citrus with a miniature plastic greenhouse and incandescent bulbs for heat, they can be grown farther north. In Palms Wonāt Grow Here and Other Myths (Timber Press, 2003), author and botany professor David Francko details practices that allow citrus to be grown outdoors as far north as zone 6 in Ohio, where he lives. My wife and I donāt put oranges in our Christmas stockings, but we do celebrate with citrus. In January, we harvest a few Meyer lemons. While I dice them up, tender skin and all, she makes crĆŖpes. We dribble a couple tablespoons of diced lemon and a half tablespoon of brown sugar in each crĆŖpe, roll them up and eat them standing over the counter with juice running down our chins and forearms. Itās almost as much fun as getting a puppy.

This article originally appeared in the November/December 2015 issue of Hobby Farms.