The vibrant black-and-blue butterflies aren't as common as they once were, but it's not too late to help pipevine swallowtails by establishing plants for food and shelter. 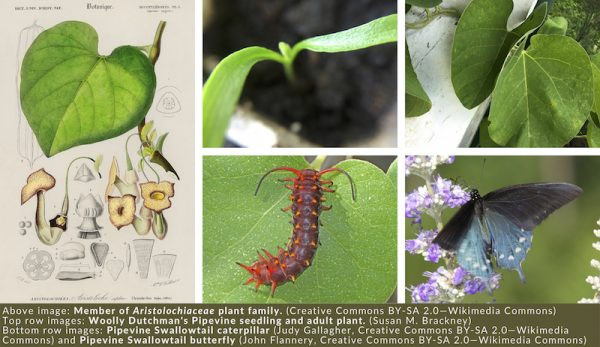 Monarchs aren’t the only butterflies with very specific needs. Just as monarch caterpillars depend solely on milkweed to survive, the larvae of pipevine swallowtail butterflies munch away onâ€”you guessed itâ€”pipevines.

Unfortunately, according to the North American Butterfly Association, â€śThere are many locations where the local pipevine population has dropped so low that the pipevine swallowtail is no longer sighted.â€ť

Read more: Plant milkweed in your yard to benefit pollinators.

In the U.S., the Battus philenor species inhabits the southern states as well as much of the East Coast and the Midwest.

These caterpillars eat nothing but pipevine leaves.

The plants themselves contain poisonous compounds, which confer protection to the caterpillars. As a result, most potential predators know to pass on these creatures as well as the adult butterflies they’ll become.

There are several pipevine plant species. Matching the right native pipevine for your particular portion of the pipevine swallowtail’s range is key.

Both Aristolochia tomentosa and Aristolochia macrophylla are woody perennials that will tolerate some shade. And both thrive in soil that’s rich and well drainingâ€”but not dry.

Aristolochia tomentosa is suitable for Plant Hardiness Zones 5 through 8. A. macrophylla does well in Zones 4 through 8. And Aristolochia californica prefers Zones 8 to 10.

Not sure which pipevine plants might be most appropriate for your spot? Consult your nearest native plant nursery for guidance. And once you do settle on a variety, be sure to plant plenty of it.

â€śCaterpillars of pipevine swallowtails feed in large groups from the moment they hatch and can eat a very impressive amount of foliage in a short period of time,â€ť Wong notes.

Although pipevines are fast-growing climbers, it can take two to three years for them to really take off. It can take just as longâ€”or longerâ€”for swallowtails to find your new pipevine plants.

â€śPipevine swallowtails are specialists and are localized wherever their host plants grow, but [they] may be virtually absent in areas,â€ť Wong says. â€śIf gardeners are planting a new vine, it may take time for the butterflies to find it on their ownâ€”and that is okay!â€ť

Eager to speed things up? You might want to purchase pipevine plant starts, rather than seed. (Of course, you’ll likely get more bang for your buck with seed.)

Dutchmanâ€™s pipevine seeds are flat, woody and triangularâ€”and they can be a bit difficult to start. For best results, cold-stratify your seed for a couple of months first.

Pre-soaking seeds in warm water for several hours ahead of planting can help, too. (This will soften up their tough exteriors.)

Keeping seed flats in a warm spotâ€”or using a seedling heat matâ€”should further boost your germination rates. But most important of all? Keep the soil moist (but not water-logged) and be patient.

(My own Aristolochia tomentosa seeds took several weeks to sprout.)

Read more: Consider leaving the leaves for wildlife when cleaning up the garden.

You may be feeding pipevine swallowtail caterpillars, but what about adult swallowtails?

To ensure that you’ll have something to offer from early spring into fall, mix nectar-rich, native perennials with annuals and flowering bulbs. (Because you’re trying to give butterflies a boost, avoid using insecticides while you’re at it.)

Also, Wong cautions, â€śSince many swallowtail butterflies such as pipevine swallowtails … overwinter as [chrysalises] on sticks, buildings and other structural elements in the garden, cleanup and removal during these times of the year should be done carefully so that dormant butterflies aren’t being removed from the garden or tossed in the compost.â€ť

Spice Things Up With A Selection Of Culinary Spices!