Truffles Are A Delicious, Desirable Crop To Grow

The stuff of foraging legend, truffles are a sought-after delicacy that, with some dedication and investment, you can grow and harvest on your land. 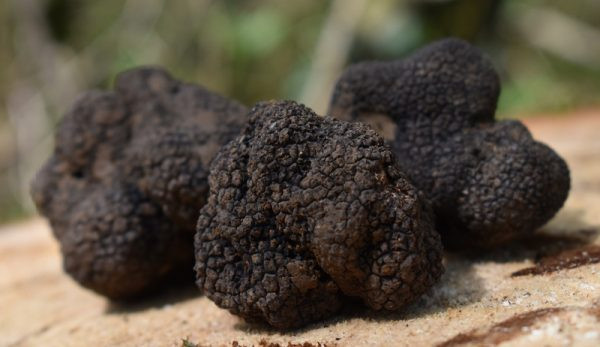 If you haven‚Äôt eaten truffles, you might be wondering what all the fuss is about. After eating my first plate of pasta covered with thin truffle slices, I understood what the fuss was about but couldn‚Äôt explain it. I just knew that if my sense of smell were strong enough, I, too, would be down on all fours like a pig, snarfing up truffles, dirt and all.

So on a trip to Tuscany, Italy, my wife and I hired someone to find and feed us some truffles. Massimo, our truffle forager, introduced himself as a ‚Äúlittermate‚Äù to his dogs. He had grown up with them. His father and grandfather were also long-time truffle hunters in San Miniato, a short drive west of Florence. His sister, Letitzia, would serve us lunch made with the truffles we found.

Massimo loaded Stella, a knee-high black and white truffle dog, into her crate in the back of his car and we were off. Ten minutes later, we pulled into a patch of woods. Now loose, little Stella was so happy that she pogo-jumped several times.

Her head bobbed up nearly as high as mine.

In a few more minutes, Stella sat down to mark a spot where she smelled a truffle just below the surface of the soil. Immature truffles are also close to the surface, but they don‚Äôt give off an aroma until they are ripe.

The truffle is an underground mushroom. Regular mushrooms can release their spores to the wind. Underground truffles have to give off a strong aroma to attract certain species of mammals to dig them up, eat them and then poop out their spores across the countryside.

Dogs don‚Äôt think of truffles as food. Pigs, however, do eat truffles. In the old days, truffle hunters used pigs to sniff them out. Which leads to an equally old joke: How do you tell a truffle hunter who uses pigs from one who uses dogs?

The one that uses pigs is missing a few fingers.

The U.S. has delicious, native truffles: The pecan truffle in the southeast and the Oregon white in the Pacific Northwest are a couple examples. Growing these in their native range would probably be the least expensive option for a hobby farmer.

Foragers can also seek them out with a trained dog and a landowner‚Äôs permission. (Hint: Know any pecan orchards?)

The most sought-after truffle is the Italian Alba White, but no one has been able to cultivate it. You‚Äôll need a Tuscan truffle hunter like Massimo to help you find it in winter when it‚Äôs ripe.

Some people grow a few Mediterranean truffles here with uneven results. The French Black Perigord has been grown on oak tree roots in California and the southeast. Burwell Farms and Mycorrhiza Biotech grow springtime white Bianchetto truffles on loblolly pines in North Carolina with success.

Read more:¬ÝYou can grow mushrooms on compost for a delicious fungal feast.

If you want to grow a new plantation of either native or Mediterranean truffles, you‚Äôll have to buy young trees that have had their roots inoculated with your preferred truffle.

Getting specific truffles to attach themselves to your host trees takes a bit more science than most DIYers can manage. Growers should not expect their first harvest for 3 to 5 years and may wait up to 10 years for a profitable harvest‚Äîif they‚Äôve maintained their planting well.

A well-maintained, mature plantation could gross $25,000/acre per year.

Granted, lime is less expensive than most fertilizers. But it will be a substantial annual expense for materials and labor. Traditional farmers have used dolomitic lime because it has magnesium.

Farm truffle master Richard Franks at Burwell Farms is experimenting with less expensive calcitic lime. No one is sure if the truffles really need the magnesium, so he‚Äôs decided to find out.

Dogs have to be trained to sniff out special things such as bombs, narcotics, fugitives and, of course, truffles. You can buy a dog already trained for that if you have about $5,000 lying around. But any lively, trainable dog with a decent nose can be trained at home if you have the time and the discipline.

With some of your target truffle in hand you‚Äôll need to get your dog to associate that with something that matters to them: a treat, a ball to chase, a toy to chew on. There are resources online for dog training such as Truffle Dog Co.

Some Truffles Are Weeds

So is it as simple as putting the trees out, keeping the pH up and then spending a lovely day with your dog gathering thousands of dollars worth of truffles? Hey, you‚Äôre a farmer. You know better.

There are such things as weed truffles.

The Field Guide to North American Truffles shows just 90 species of the many native truffles you may have to contend with. Only a few in the field guide are tasty. The rest are described as palatable, insipid, inedible or even poisonous.

And they will compete for space on the tree roots, especially if you don‚Äôt keep conditions in an optimal range for your cultivated truffles.

One mystery of the truffle trade in Europe is the falling size of annual harvests. Some put this down to loss of habitat from growing cities and expanding farms. Some think climate disruption is the problem.

But no one has really been able to pin down an answer.

I have a theory that could explain poor production in the wild and in cultivated plantings. I wonder if the lack of truffle productivity comes from their spores not being spread in the fashion they evolved with‚Äîbeing eaten by pigs and spread across the countryside.

My suspicion felt confirmed when a truffle farmer showed me a technique that has improved production on some farms. The technique is called Spanish Wells.

Dig a hole at the edge a truffle tree‚Äôs drip line, and fill it with a wet mixture of spores and earthy soil mix. Come back to the spot in a year and harvest plenty of truffles that have attached where the roots were cut by the digging.

This sounds very similar to what would happen when a pig roots around for truffles: roots get cut, spores‚Äîin an ideal substrate‚Äîare deposited and new truffles get started.

But I also wonder if turning loose some pigs at the ragged end of your harvest season‚Äîafter you‚Äôve already gathered nearly an entire season‚Äôs worth of truffles‚Äîwouldn‚Äôt bump up the next year‚Äôs harvest.

Plus, just think of what you could charge for pigs that have chowed down on truffles before slaughter.