Grow & Use Your Own Stevia

This sweet herb can be grown in your backyard to add natural sweetness to your favorite dishes. 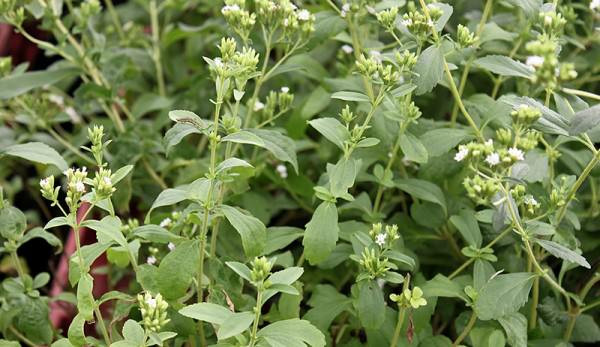 Stevia has become quite a buzzword in recent yearsâ€”a sweetener that seems to fulfill the constant human quest to have our cake with no consequences.

To be clear, I believe in sugarâ€”real, raw sugar, that is. The body uses sugars for energy, and once upon a time, it asked for what it needed when it needed it. Sugar and sorghum cane, maple and other tree sap, and honey provided any sweetening that humans needed beyond whatâ€™s naturally in fruit. Then we started figuring out how to super-refine these sugars, and sell them cheaplyâ€”if you donâ€™t count the human cost, that is, from slavery to Type II Diabetesâ€”and what was once a natural and reasonable craving for a little sweetness became what amounts to an addiction that now crosses many cultures.

So I ignored stevia when it first appeared on my radar, but as I learned more about it, I became intrigued. Supposedly, it had been in use by Asian cultures for millennia and was 100 times sweeter than sugar. I read a littleâ€”and learned that in fact, it was never used in Asia, but in South America, specifically Brazil and Paraguay, and for more like 1,500 years. Also, according to the Global Healing Center, itâ€™s only 40 times sweeter than sugar in raw leaf form, though the powdered sweetener you find in stores is up to 300 times sweeter.

If it was really a plant, and not something humans had made in a lab, then I decided I might be interested. I looked for it at my local natural health food store and gasped in shock at the priceâ€”that tiny bottle was somewhere in the vicinity of $16 (though, for 644 servings)! I bought some, and I liked it. Because I still donâ€™t believe in excess, and because I also believe in sugar, those 644 servings lasted me more than two years.

Being me, I soon began to wonder if I could grow it. Last summer, while buying starts for other herbs, I discovered I could buy a pot of four stevia plants at a local gardening center. I sneaked a bit of leaf to chew. It was, indeed, super sweet, but it had just a hint of herby bitterness. That was OK with me, but also made me wonder if, as usual, the whole plant had a lot more in it than the refined white powder in the bottle at the store.

I got the pot and planted them in my kitchen herb garden, which grows right outside my front door. Stevia was effortless to grow, and in fact grew taller than I expected, so next year Iâ€™ll plant it farther back from the edge of the bed. I cut the plants on half the garden but not the other, so theyâ€™d flower and I could save their seeds; this year Iâ€™ll plant more. You can take them indoors over winterâ€”Iâ€™m going to try that with one or two.

I use stevia mostly for things like sweetening tea (herbal, in my case, which should really be called a tisane). One fresh sprig can be steeped with tea leaves and will sweeten to my taste. Experiment to see how much you need.

Stevia also dries well and keeps its flavor. You can, of course, dry in a dehydrator, but if you donâ€™t have one, simply find a warm, dry spot. If you have an old gas stove with an oven pilot light, use that. You can also dry on top of a refrigerator, freezer or microwave, or hang in bunches in a dark, dry spot.

When you steep leaves in tea, you are only getting their essences and oils. Another way to use dried herb is to grind it up and use the whole thing. In early fall, after I had collected all the flower seeds I could, I cut the whole plants and dried them in the dehydrator so they would be well-dried. Then I put these into my VitaMix (that thing is worth its weight in gold!) and came up with about 3/4 cup of powder from those four plants. (This does not count what I had used over the course of the season.) I use the powder to sweeten cocoa, which I make myself from real, 100-percent cocoa powder. However, there is one disadvantage: This powder floats on top of the drink and gives just a hint of grittiness. I find I donâ€™t mind it; I stir the cup now and then. This way, Iâ€™m getting all the health benefits of the herb.

I have not yet grown enough stevia to try it in baking or homemade candy, but I will. Bottom line: I like it!