Grow Your Own Beans With Help From Plot 37

Jessie Sheffield from the London-based allotment reveals key cultivating tips for beans and tells us why she's smitten with giant Greek Gigantes. 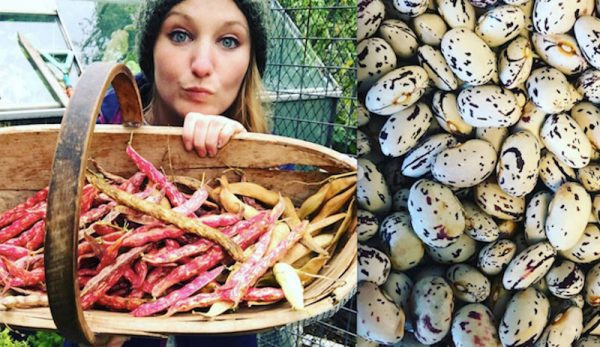 If, lately, you’ve decided to grow your own beans, you might want to take a look at Jessie Sheffield’s Plot 37 venture for some inspiration.

Based in South-West London, Sheffield and her mom tend over an allotment garden‚Äîakin to a community garden system. The garden produces a bounty of seasonal produce, including a vibrant range of beans.

Sheffield, who was formerly a professional gardener and garden designer for 10 years, says she originally started documenting the allotment’s contents on Instagram “purely as a way of keeping track of what was happening season to season.” That way, she could look back and discover “where the brassicas were planted out, how well the lettuce grew in [a particular] bed, when the first asparagus appeared each year.”

We spoke to Sheffield about how you can get into growing your own beans and why she loves some of her favorite varieties. We also touch on tactics for harvesting beans.

What You Need to Grow Summer Beans

When it comes to getting started growing summer beans, Sheffield says you really don’t need too much in the way of equipment.

“If you are starting your beans off indoors, you will need some potting compost and a sowing tray that has a bit of depth to it,” she explains. “Beans and peas all have quite deep roots. And they need a bit of soil depth to grow well, but they are just as successful directly sown into the ground or a large pot where they will stay all season.”

Sheffield advises to “bury them double the height of the seed itself and watch out for mice if you start them off early, because they love them and are a bit short on food at that time of year!”

Sign up for the Hobby Farms email newsletter to receive stories weekly!

If you’re blessed with enough space, Sheffield recommends you grow your own climbing beans.

“I always choose climbing varieties but they do require a structure to grow up,” she says. “This can be a simple wigwam made from bamboo canes or something more elaborate. I grow them up over arches that span the paths on my plot to save space.”

Climbing beans also “look fantastic, as bean flowers are really very pretty.” Sheffield adds that another advantage of climbing beans is the way they hang down for easier picking.

What Type Of Beans Should You Grow?

Growing the beans over arches this year has been a revelation. . Not only has it freed up 2 whole beds but it makes picking them so much easier! The beans just hang down perfectly visible! They seem much more resistant to getting mildew as well because there‚Äôs so much air movement around them. . I am fully convinced! I shall never go back! . #beans #growingbeans #frenchbeans #growyourown #growyourownfood #gyo #growing #instagardener #inmygarden #nationalallotmentweek ##growingyourownfood #sustainability #organicgardening #vegetables #eatyourgreens #vegetablegarden #harvest #tipsandtricks #garden #gardeningtips #savetheplanet #sustainablefood #eatlocal #foodmiles #allotmentlove #allotmentuk

There’s a sizable range of bean varieties you could consider starting off with.

“Beans are generally an easy crop unless you try some of the super long Asian beans,” says Sheffield when asked if she recommends any specific bean to begin with.

“But with regards to the common bean, there‚Äôs plenty of variety. And no one is any easier [to grow] than the others really. If you can only grow one bean, I would choose a fresh eating variety over the dried because you get so much more from them.”

Borlotti are going over now but they are covered in pods. I do believe we might survive the winter! Having said that, any opinions on the predictions of Beast from the East mark II that‚Äôs on its way? I better get chopping logs… . #borlotti #beans #harvest #survival #Allotment #allotmentlove #allotmentlife #grow #growyourown #gyo #homegrown #vegetablegarden #girlsthatgarden #theediblegarden #digforvictory #thegoodlife #kitchengarden #organicgarden #vegpatch #homegrown #sustainable @growyourownmag #gardenersofinstagram #londonallotment #growtoeat #growsomethinggreen

“Generally, beans like a good amount of water and the leaves can suffer from harsh wind. So plant them somewhere sunny and sheltered,” says Sheffield.

She adds that aphids can also become an issue. If aphids attack your beans, try using diluted dish detergent or linseed oil in a spray bottle to ward them off.

Beans are relatively easy to harvest. For fresh beans, Sheffield says “the only struggle is to keep up with the picking. If you let pods get too big on the plants, they will stop producing so you have to harvest them as they come.”

When it comes to dried beans, it’s a case of “simply letting them get on with it over the summer and leaving the pods to dry on the plants.”

After that, once they become papery and brown, Sheffield says “just nip them off and the dried beans will fall out.” At that point, you can store them in glass jars or freeze until the winter.

Check out these methods for threshing harvested beans.

When it comes to her personal favorite beans, Sheffield has a collection of four that she makes sure to grow every year.

First up, there’s Trionfo Violetto, a climbing bean that she says is “a gorgeous plant in its own right” that has “dark green glossy leaves” and flowers that are a “deep beautiful purple.”

Next, there are Borlotti Lamon beans. “The pods are splattered with red and the beans are a beautiful maroon and white speckle. They dry really well and can be stored for use all winter.”

Finally, Greek Gigantes are “a spectacular drying bean” that grow to a wonderfully huge size. “They have pale lemon-white flowers,” she says. “They can get quite heavy because of the hearty pods!”