Grow Your Own Oyster Mushrooms For Flavor & Profit

You can grow your own mushrooms at home, in the basement or or dark space, to enjoy in meals and even sell at local markets. Here's how. 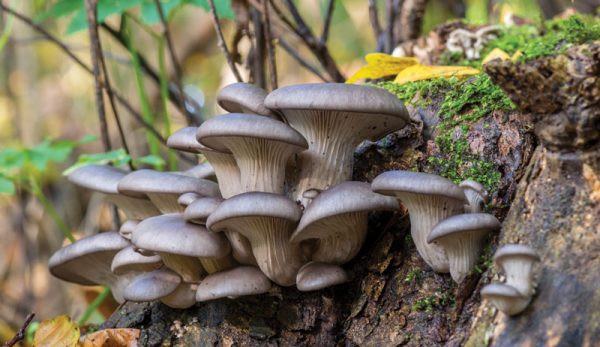 Seventeenth-century French mushroom farmers tended their crops in caves near Paris. In the oxygen-rich basement of Nick Foxâ€™s downtown duplex in Durham, North Carolina, he and Rob Jones used to grow oyster mushrooms for the local markets and restaurants.

Itâ€™s not as romantic as a cave (or Paris). But it kept their costs low enough that they could start their Woodfruit Farm with minimal debt. And Fox couldnâ€™t complain about his commute.

While theyâ€™ve both moved on to other ventures, their principles for starting a small-scale mushroom farm are still sound.Â

To create the growing media for these basement mushrooms, they combined local organic wheat straw and cottonseed hulls. They then pasteurized this â€śsubstrateâ€ť in a horse trough by using a steam generator. They mixed mycelium with the substrate by hand and loaded the mix into ventilated plastic bags, then harvested by hand and delivered to restaurants and local farmers markets.

To improve productivity, Fox designed a system to filter outside air and add oxygen to benefit the mushrooms in the basement. He also used quiet, efficient fans (from the marijuana-
growing industry) and lights that can handle the high humidity (from the aquarium industry).

These fans and lights hung from the copper pipes that supplied water to his home upstairs.Â

In addition to edible mushrooms, Jones and Fox also grew medicinal mushrooms such as reishi, chaga and turkey tail. They sold to local restaurants in a variety of cuisines: fine French, Spanish tapas, Italian pizzaria. Their interests have drawn them into other ventures since then. But Jones and Foxâ€™s project inspired me to explore growing oyster mushrooms at my home.Â

As Easy as Making Coffee

I first learned the ease of growing oysters in our kitchen by filling a 5-gallon bucket with our spent coffee grounds. I sprinkled a bit of mushroom spawnâ€”you can start your own or buy the spawn onlineâ€”in the bucket as I added coffee grounds. This way, I created a miniature garden of growing mushrooms.

I merely had to leave the bucket lid ajar for ventilation and to let a little light in. It took about a month to harvest a couple pounds of mushrooms without leaving the house or doing anything that resembled work.Â

Making coffee essentially pasteurizes the grounds with wet heat: an important first step in mushroom cultivation. When organic matter is damp, it becomes an attractive food source for any fungi spores floating in the air.

However, by first using sufficient heat to pasteurize your mushroomâ€™s food source, you give your chosen mushroom spawn a head start in the race to colonize your pristine coffee grounds. But as any farmer or gardener knows, no system is perfect.Â

Along with my first oyster mushrooms, another unknown and inedible mushroom got a foothold. A â€śweedâ€ť mushroom if you will.

Weed mushrooms can overpower most edible mushrooms. But oysters grow fast enough to get a harvest regardless of weeds. This makes them the best species for beginners to start with and at least have some success.

But Will It Pay?

Summer is a tough time to start a new crop. But what if a farmer could grow a highly profitable crop in the farmhouse basement (or a shed) in summer (and year round) at a comfortable temperature of 75 degrees?

In an indoor growing area that measures even as small as 10-by-10 feet, a proficient farmer can harvest about 400 pounds every other month. That would produce around 2,400 pounds of oyster mushrooms each year. Selling at $6 a pound wholesale, that means even that tiny 100 square foot growing area can gross about $15,000 a year.

Rather than plowing a field or foraging in the woods, oyster mushrooms, which normally grow on trees, will grow from plastic bags full of straw. When the mycelium has completely taken over the straw, the edible part of the mushroom will fruit and erupt from slits in the bags.

With the bags hanging from joists or rafters overhead, the mushrooms are easy to harvest from a standing position. And any mushrooms that canâ€™t be sold fresh to restaurants or for retail prices at a farmers market can easily be dried in a dehydrator, stored in jars and sold another time.Â

Read more: Check out this video about foraging, drying and storing oyster mushrooms.

Probably the most commonly used substrate is wheat straw. And you can easily buy bales of straw. Be sure to shred the straw into shorter bits.

A string trimmer can do the job if you drop some straw into a big garbage can and insert the trimmer like a kitchen mixer whipping up some batter.

But no matter what substrate you use, youâ€™ll find all the hands-on adviceâ€”and photosâ€”youâ€™ll need in Tradd Cotterâ€™s book Organic Mushroom Farming and Mycoremediation. The book covers cultivation techniques for two-dozen edible mushrooms including
chicken-of-the-woods, shiitake, maitake, beefsteak, lionâ€™s mane as well as oyster and many others.


His website, which he runs with his wife Olga, can supply all the spawn youâ€™ll need to get started in mushroom cultivation. In the book Cotter writes that â€śOyster mushrooms are some of the fastest-fruiting fungi on the planet, making them perfect for educational projects and disaster relief.â€ť

In addition to growing on straw, Cotter shares techniques for growing various mushrooms on wood chips, logs, stumps, sawdust and yes, even fresh coffee grounds and old blue jeans. One chapter is dedicated to suitable fast-acting classroom projects for schoolchildren.

The keys things to keep in mind when growing oysters are:

Read more: Oyster mushrooms are tasty & easy to find in the wild.

Pasteurizing your substrate can be done with several low-tech methods. Cotter describes using solar heat or even a solution of wood ashes that can pasteurize at room temperature. His preferred method is to pasteurize a batch of wheat straw by dunking it into 55-gallon, food-grade metal drums with tight-fitting lids.

He stands his drums on bricks or cinder blocks to make room for a propane burner. Then he heats the drums to about 170 degrees F for 1 to 2 hours, which is enough to pasteurize the straw.Â

The wet straw is heavy, so he uses an electric hoist and a simple aluminum cage to raise and lower each batch of straw in and out of the drum. A winch on a vehicle or a set of pulleys (and a set of muscles) would work in place of an electric hoist. After itâ€™s been heated long enough, the straw is dumped out onto a stainless steel table thatâ€™s been wiped down with rubbing alcohol beforehand to eliminate weed fungi.

Once the substrate has cooled enough to handle, Cotter puts it in his containers, which might be long plastic bags, poly tubing, PVC pipes or even repurposed nursery pots that have been soaked in a 1:10 solution of bleach: water to eliminate weed fungi.

When two-thirds full of substrate, the nursery pots are easy to stack. And the drainage holes make perfect escape hatches for the mature stalks of oyster mushrooms.

Some oyster species can be grown outdoors on fresh logs and stumps with assistance from overhead sprinklers during dry spells. But best results are found growing them in enclosed structures that allow the farmer to manage humidity and temperature. This is especially true for oyster mushrooms such as pink, golden and Florida oysters from tropical regions.

But even temperate varieties such as king, tree, blue and phoenix oysters will produce more under controlled conditions. Some farmers even adjust the oxygen and carbon dioxide levels indoors to a small degree to promote growth and fruiting.

The time from inoculation of the substrate with spawn to harvest may be 3 to 5 weeks. Subsequent flushes should arrive several weeks apart.

Harvest singles or clusters of oyster mushrooms by hand. Twist them to remove the base of the stalk. Trim the end to keep your harvest clean. (The trimmed ends can also be used to start another batch of spawn.)

Arrange the mushrooms facing the same way in boxes to save space, reduce damage and to make them look more appealing. They can be stored in a fridge for 1 to 2 weeks. But given their flavor and the demands of the market, I bet they wonâ€™t stick around that long.Â

Oysters mushrooms (Pleurotus ostreatus; Latin for: ear on its side, oyster) make a perfect reward for the novice forager: Theyâ€™re easy to spot and identify, and they taste great, too. You may be able to find cultivated oyster mushrooms at your farmers market and get a good look at them before foraging for wild ones.

When a friend wanted me to teach him to forage, we walked across the road from his property into some woods. Less than 50 feet in, oysters greeted us on a big fallen beech tree. We both grabbed double handfuls to bring home.

We spent more time preparing and eating them than we spent foraging. You may not always find oysters so quickly, but theyâ€™re very common in the woods.Â

Most edible mushrooms grow on the ground, where they may be small, few in number, obscured by leaves and hard to find. An oyster mushroom, on the other hand, may only be a few inches across. But they often grow in clumps the size of a soccer ball.

And they are up off the ground, making them among the easiest mushrooms to find, especially in winter when tree leaves no longer block your view.Â

Crepidotus species look somewhat similar but are smaller, more often individuals, have no stem and a brown spore print.Â

ID Checklist (all must be correct)

Unfortunately, oyster mushrooms get their name from their appearance not their taste or texture. The dense, white flesh has a straightforward mushroom flavor, although some people detect a mild licorice scent on the fresh ones.Â

My wife isnâ€™t fond of the texture of mushrooms generally, but I found a cooking method that had her asking for seconds of oyster mushrooms. I sautĂ©ed them in bacon fat on medium low heat for about 25 minutes, until the deep gills got crispy like fried chicken batter and the meaty caps were imbued with porky goodness.

Try that and you wonâ€™t care at all that they donâ€™t taste like oysters.Â