Grow Your Own Snacks With A Bed Of Peanuts

Ever considered growing peanuts? There are some challenges, but this author's experience, documented in her gardening journal, shows it can be done. 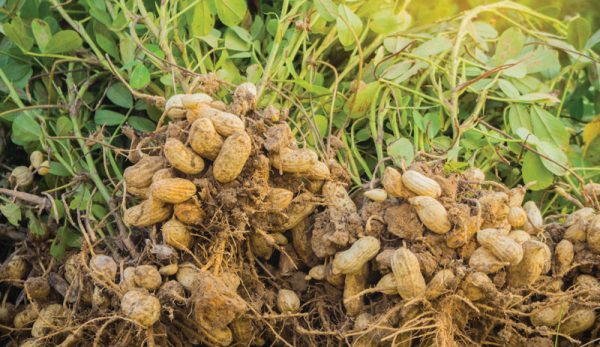 When I first saw peanuts in a seed catalog many years ago, I was immediately intrigued. But I lived in north-central Ohio, and the catalog said peanuts require 120 days or more. Besides, growing in the soil I had at the time was rather like trying to till a parking lot. I’ve been in Kentucky since 2006, though, in a house with 4 acres that belonged to a master gardener for a quarter century. I’ve learned what gardening is supposed to be like.

I immediately tried peanuts. My first bed was four rows of raw “goobers” I purchased at a health-food store. It was one of the easiest crops I’d ever produced, needing little attention once the plants got big enough to crowd out weeds and producing matts of 30 or more peanuts per plant. But the only kind I can get that way are the small Spanish peanuts, and shelling them is a pain. So I started buying expensive seed peanuts of the jumbo Virginia variety.

Then came several years in a row when they failed, no matter which kind I planted. First, they wouldn’t germinate. Then, they would come up but disappear—eaten by some kind of burrowing critters. Some grew larger, but they still kept disappearing. Sometimes I’d find them on the ground.

I was achieving expert status: I knew several ways not to grow peanuts. If it weren’t for that first success, I would have given up, assuming they were not suitable for my garden. But I really wanted to grow my own snacks, and I had to get this right.

In 2016, I bought jumbo Virginia seed again. This time, I sprouted several in damp paper towels, just to be sure they germinated. They did. When the first ones I planted never came up or came up and then disappeared, I tried starting a couple dozen in little pots so I could protect them. Only five plants survived. I was disgusted, but I saved most of the biggest and best nuts for seed, hoping they were good for my particular site. I brushed off all the dirt, made sure they were dry (in the shell) and saved them in a plastic bag in the refrigerator.

In 2017, grimly determined, I set out to try again. I invested in one of those plastic seed starter trays with 72 peat pellets and a little “greenhouse” lid. On April 27, I carefully shelled my seed peanuts. I pushed my finger into the center of each watered peat pellet and pushed one unbroken nut carefully down in the hole. Then I put the lid on, turned on grow lights and waited—though not for long.

The following entries are from my 2017 gardening journal.

May 1: Today, all my little peanuts are poking up their heads. This is not as miraculous as it might seem—after only four days—because they were so big for their peat pellets that I had to add a layer of dirt over them all just to cover them when they were first planted. At any rate, it looks like nearly all of them germinated. Here’s hoping I can get all of the plants to adulthood.

May 3: My little peanuts are rapidly outgrowing their little greenhouse. Only nine show no sign of eruption; some are 3 inches tall, and many are unfurling real leaves. I put them out on the porch this afternoon but in a shady corner. I don’t think they’re ready for the hot sun just yet.

Notes: Naturally, the weather did not cooperate that year. At this point it was hot, but we were about to have a cold snap.

May 5: They’re practically growing an inch a day. They can’t go out yet; it’s supposed to be in the 30s again, and even a chance of frost on Sunday night. They’re shoving out of their little peat pots, that’s for sure. But they’re doing beautifully.

May 8: I put out 66 peanut plants, spaced at about 18 inches in the rows and 2 feet between rows. A few didn’t look very developed, but when I got the peat pellet out there were roots, so I planted them. There were six left that showed little or no signs of life, so I planted them in one particular spot together so I can transplant if they do grow.

Notes: I started trying to garden after reading The Ruth Stout No Work Garden Book in 1979 when I was pregnant with my first child. I’ve been growing nearly everything I eat all year since I moved here in 2006. On top of all that, I’d had so much trouble with peanuts that I really should have known better than to make the mistake I was about to make.

May 11: Every day I’ve been looking over at the peanuts, happy that they seemed to be doing well, but I was not looking closely. I was pretty upset today to discover that there were several pulled out by some creature(s) and left lying around. As I watered, I kept finding more and replanting them. A couple were pulled out by the roots and might not survive, but most still had their pellets and looked reasonably good except for one that had been left out longer and was dried out and wilted. I soaked that one before replanting. I am really mad. I can now count 57 remaining. There are spots where I don’t know whether it was just the poor ones still not showing, or some are gone. I have to inspect more closely.

May 14: I have been watching the peanuts but apparently still not closely enough. Yesterday I found three or four pulled out again, and I replanted them—today, at least eight more. Snarling, I replanted, watered thoroughly and cut my remaining netting into four 3-by-15-foot pieces and covered all the plants. Those four pieces weren’t enough, but with some leftover white netting and the strawberry pyramid cover, I got them all under cover and will keep them that way until they’re bigger.

Notes: It was after all this that I finally found the long-sought answer: It was crows. I’ve had a whole murder of crows (a well-chosen group name) living in the giant old trees along my creek for several years now. In general, I like having them there, but it turns out that they pull up plants apparently just for the fun of it, not even to eat them. They also will eat chicken and duck eggs if they can get at them, but that’s another story.

Well, long story short, the netting worked. The plants grew, and I kept watch over them, doing my best to keep them weed-free until they got big enough to crowd out their competition.

May 30: I left a row uncovered to see what would happen, and because they’re still untouched today, I uncovered the other rows. I now have 60 viable plants.

Notes: After this point, only one plant was pulled out. I replanted and kept watching, but they were now big enough to be safe. I had found the secret.

June 13: I was given long cardboard boxes from wood flooring, and let me say, those are perfect for between garden rows. There was enough for all the paths between the peanuts. And it did not blow at all, with the wind before our rainstorm. This stuff is great.

Notes: As peanuts grow, they become wide and bushy; some of mine were 5 feet wide by the end and getting ready to put down the “pegs” on which peanuts will form. So I started taking out the cardboard between them, beginning with the biggest plants, leaving cardboard in a wide row around the outside of the whole peanut patch. I believe that if you use a chip-type mulch, or straw, the peanuts could peg through it.

Aug 1: I took out some more cardboard from the peanuts and did a bunch of weeding. It’s tricky at this stage, weeding without pulling up pegs. I didn’t realize how many weeds were still in there.

Notes: In retrospect, it would have been better to leave 3 feet between rows, because they ended up as one lush field of peanuts, and I could no longer get in to pull any weeds that I’d missed. When the leaves begin turning yellow, harvest is near. You can also dig around the edge of a plant or two, pulling up a few pegs gently to see how the nuts are doing. I waited as long as I could, letting peanuts get fat.

I harvested the peanuts on Oct. 28. It was easy, especially if you harvest them a day or so after a gentle rain. Starting at the end of a row so you can see where you are, gently lift up the trailing branches—which will have a few nuts along their length—until you find the center. Get a good hold on the whole crown and lift, shaking and tugging gently until the whole plant comes up. Turn it upside-down so the nuts can dry, preferably in fall sunshine. Have a trowel handy in case you need to loosen earth a little.

Weather permitting, leave them in the garden a few days. (When rain threatened, I moved mine to the garage floor for about a week.) Then pull peanuts from their plants. You can give the plants to your livestock or compost them; they’re very high in protein and nitrogen.

Rinse off the dirt from the shells, and lay them out on a sheet in a warmer room to dry. Mine were in the living room in front of the fireplace where everyone could trip over them and the cat could play with them. When they’re thoroughly dry, store them in a mesh bag in a dark cupboard. I had about 15 pounds of peanuts—enough that I’ve been eating them all year and didn’t plant any this year.