Whether you call them sunchokes or Jerusalem artichokes, these vegetables belong in the urban garden. 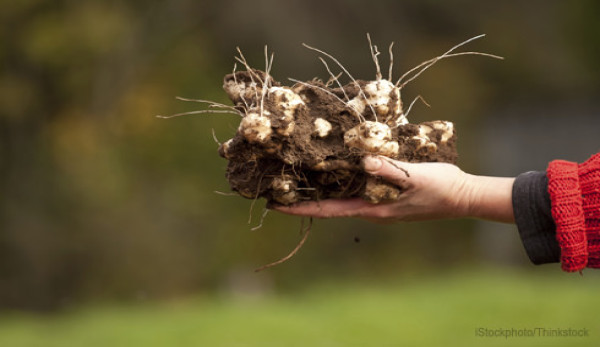 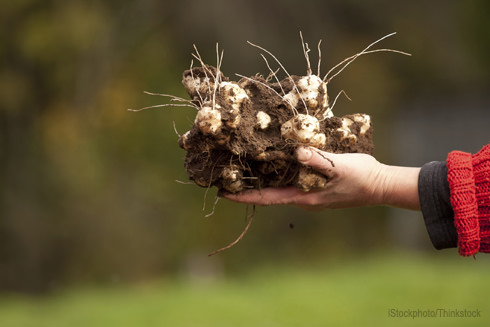 With a name like Jerusalem artichoke, you wouldnâ€™t think this was a native plant â€”Â or an edible root, for that matter. The story of this great misnaming is hardly interesting enough to retell in detail. Suffice it to say that the Italian word for sunflower, girasole, was mistaken for “Jerusalem.â€ť Somewhere along the line, a French explorer compared the taste to artichokes, and it all went downhill from there. The modern name, sunchoke, is a small improvement. But what kind of marketing strategy refers to a food item as “chokeâ€ť?!

But since a rose by any other name would smell just as sweet, a sunchoke will be just as delicious and reliable when someone comes up with a winning name like sunsugar (its sweetness comes from a form of sugar thatâ€™s beneficial to people with diabetes) or sunflour (when some food industrialist makes bread from it).

Some compare the taste of sunchokes to artichokes, turnips or potatoes, even with sunflower seeds.Â Iâ€™ve enjoyed sunchokes sliced raw for salads and roasted with other root crops in casserole dishes. Sunchokes are versatile, and many recipes are available. Ignore any suggestions to peel this gnarly tuber, since thatâ€™s difficult to do and unnecessary.

Meanwhile, be forewarned that like beans, onions and peppers, a few folks generate roaring flatulence from sunchokes, while most never experience or even catch wind of this issue. Fortunately, Iâ€™m in the latter camp. But for the former group, cooking sunchokes with herbs such as bay, epazote, asafetida or ginger should silence that problem.Â

Colonists and Native Americans ate sunchokes growing throughout the eastern half of the country. Itâ€™s a pretty tough plant thatâ€™s also pretty when the 5-inch-wide sunflowers come out just before the first frost. After a killing frost, cut down the 6-foot-tall stalks, harvest the roots or save them in the ground for winter use.

Sunchokes like to spread by their roots. In our small garden, I contain them in 10-gallon nursery pots. The pot also makes harvesting easier: Dump it on a tarp, harvest the biggest tubers, and toss the soil, some compost and a few little tubers back in the pot for next yearâ€™s growth. Thereâ€™s no need to put gravel or broken crockery in the pot for drainage. However, I do put a couple of bricks in the bottom of the pot for ballast; the tall stalks can catch the wind like a sail and tip over.

I donâ€™t know the names of the two varieties of sunchokes that I grow, and neither did the two farmers from which I bought them. But you can order heirloom varieties from your local nursery or from many online nurseries. You can also start your plants from roots bought at the grocery or farmers market any time of year. One of the best things about sunchokes is that, since itâ€™s a perennial, youâ€™re not tied down to specific planting and harvesting dates as we are with annual vegetables.