Our baby Buckeyes are doing fine and growing up fast! They all have feathered wings, and some have tiny tail feathers, too. Buckeyes are big, active chicks, so ours are already trying to hop out of the brooder. 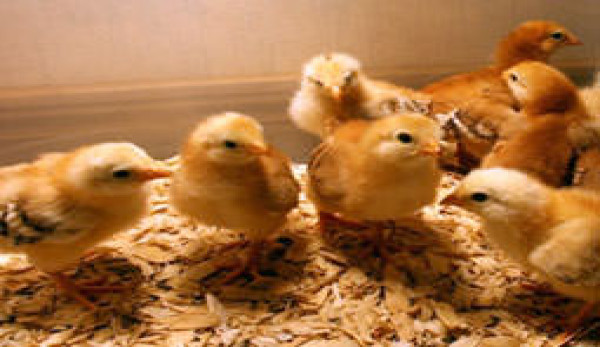 OurÂ baby Buckeyes are doing fine and growing up fast! They all have feathered wings, and some have tiny tail feathers, too.Â Buckeyes are big, active chicks, so ours are already trying to hop out of the brooder. Weâ€™ll have to put the screened cover on it soon or weâ€™ll have chicks on the living room floor.

Our chicks got new bedding this week. Now, theirÂ brooder floor is covered with shavings. At first, Mom covers the floor of their brooder with thick, low-nap towels. That keeps newly hatched chicks from slipping on a slick surface like newspaper or the bottom of the brooder itself, but it also provides an open surface so they can find food. Chicks that slip when theyâ€™re little can get spraddle legâ€”when their legs shoot out to the sides and they canâ€™t get up. If a chick slips and gets spraddle-legged, you can sometimes help it by hobbling its legs with a Band-Aid, like the chick pictured from another batch of chicks. After a few days, the legs get stronger and you can take off the Band-Aid. Voila: a fixed chick!

The first two days we had the Buckeyes, Mom and Dad fed the chicks by sprinkling chick starter directly on the floor. Itâ€™s messy and you have to change the towels a lot, but it teaches chicks to peck on the ground for food. After that, you can use an inch or two of absorbent bedding, like rice hulls, ground corncobs or shavings, on the floor. But donâ€™t use cedar shavings! They give off fumes that are toxic to chicks. Sawdust is a bad thing, too, because chicks peck it up and it clogs their digestive tracts.

Mom likes the kind of pine shavings bagged for little beasts like gerbils, but she had to settle for horse bedding this time. The shavings big and they kept plugging the chicksâ€™ water fount, so she raised it with a paperback book sheâ€™s already read twice. Itâ€™s a mystery by a lady named Sue Grafton, and her picture is on the back of the book. Uzzi and I shook our heads when we saw what the chicks are doing on poor Ms. Graftonâ€™s face.

When Mom added the shavings, she removed the pebbles from the chicksâ€™ drinking fount (by then they were smart enough not to drown), and they graduated to a feeder instead of the floor. She changes their water and washes their fount several times a day because even with Ms. Graftonâ€™s help, some shavings still get in the base. (And the chicks sometimes poop in their water, too.) Shavings are absorbent, so she only has to change their bedding and wipe out their brooder every few days. When she does, she puts the chicks in a separate box and works quickly, so they arenâ€™t away from their heat lamp very long.

Chicks are fun! And they sure grow up faster than us goats. Stick around. Iâ€™ll tell you more about them in a few weeks.Â