I have neighbors whose garden adjoins ours at the top of the cliff in a narrow area that was a neighborhood refuse pile before I converted it into part of our garden. 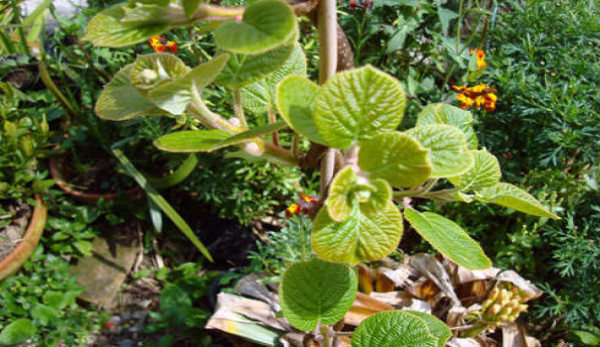 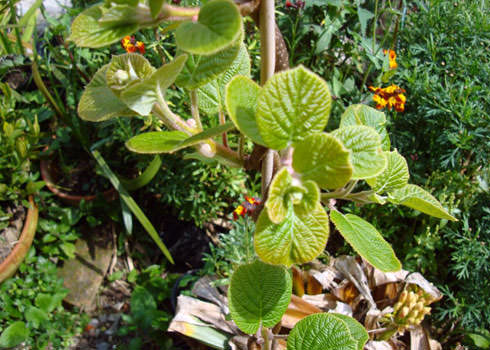 The male kiwi in the garden between my house and the neighbors’ is finally starting to leaf out!

I have neighbors whose garden adjoins ours at the top of the cliff in a narrow area that was a neighborhood refuse pile before I converted it into part of our garden. They had planted an old lemon tree on the site years before. The lemon was almost dead when I arrived on the scene and the whole sliver of ground was covered in construction debris, cigarette ashes and used kitty litter. In the process of making the garden in this underused space, I ripped out the lemon because it wasnâ€™t worth saving. This removal caused some serious indignation on the part of my neighbors. They werenâ€™t happy about their dump area being usurped, and they were concerned my garden could attract vagrants who might decide to climb onto their terrace.

In general, they made a big stink, and there was talk about their getting a city order to make me stop working on the garden and to deny me access to the garden via their buildingâ€™s little parking lot. It wasnâ€™t at all encouraging to think that I would have enemies on one the edge of the garden.Â

Some of my family and friends were ready to make a big deal of this issue and request a counter-injunction that would make them clean the weeds on their terrace wall above the garden, but I refused and would not argue with these neighbors. In fact, I spoke to the owner of the narrow piece of ground and obtained permission to do whatever I thought best in making the new garden. I smilingly assured them that they would like the new look.

Fast forward five years, and these same neighbors are now some of my biggest fans. He gives me an extra bag of concrete every once in awhile, we swap produce from our gardens, and we greet each other cordially on the street.

In the garden, one of the plants that is just now leafing out is my new male kiwi vine. (I have two female kiwis growing well, but the male I planted with them was stunted and unhappy.) When I encountered these neighbors at theÂ Ag Fair earlier this year, they told me they were considering buying a kiwi vine, but said they only had room for one vine. I explained to them that most kiwis need both males and females growing nearby in order to pollinate the flowers and make fruit. They were stumped until I volunteered that I would buy a new male for our garden and plant it near to where our gardens join, in such a way that they could enjoy growing kiwi fruit with only one vine.Â Â

So today, while the kiwi is first leafing out, I saw my neighbor in the street, and he told me their kiwi was also leafing out nicely and that they could see where I had planted my new male kiwi close to their garden. We chatted for awhile about the weather and so forth and then wished each other a happy spring season.

Personally, I think my refusal to combat with these neighbors years ago is certainly bearing nice fruit.Â Â