Grow pumpkins vertically inside a deer fence to protect fruit, increase airflow and save space. Hungry deer and troublesome weeds—meet your match! 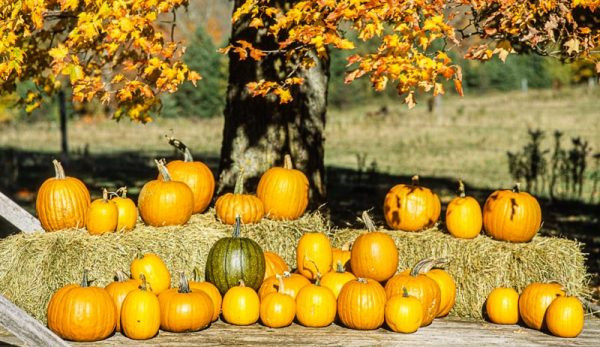 I have a new goal for 2020. Although the growing season in northern Wisconsin is on the short side, I’m going to plant a crop of pumpkins vertically along a fence.

My pumpkin-planting plans have been years in the making. In fact, this isn’t the first time I’ve given these popular winter squashes a try. I’ve grown some large ones in the past, perfectly sized for jack-o’-lanterns, but two factors have made it difficult to fully appreciate the harvest.

For starters, it’s difficult to keep a pumpkin patch thoroughly weeded. The vines spread over such large areas, keeping grass under control without damaging the vines is a time-consuming task.

But hungry deer have been the bigger issue.

You might have your eye on a nice pumpkin, waiting for it to ripen, and when you climb through the patch to harvest it … you discover huge bite marks and missing chunks on the other side of the pumpkin.

It seems like deer prefer to take a few bites out of every pumpkin, sampling the crop for the best taste, rather than completely eating one or two pumpkins from start to finish.

Last year, I constructed an imposing deer fence to protect an orchard of young fruit trees. I’m pleased with the results so far, and since I’ve enclosed a large area, there’s plenty of room in this no-deer zone for growing other plants. First and foremost, pumpkins.

The fence will serve another purpose as well. The front section is soundly constructed with wooden posts and welded wire, standing a minimum of eight feet tall.

Rather than allow the pumpkins to grow helter-skelter across the open field (which would quickly grow weedy and unattractive), I plan to plant the pumpkins in beds along the inside of the front fence. And then I’m going to encourage the pumpkins to climb the welded wire like a trellis.

Growing pumpkins vertically is appealing on multiple fronts. Not only will it make weeding the pumpkin patch easier, it will be beneficial to the vines. Allowing them to spread vertically in open air will increase ventilation and reduce the risk of disease, a win-win situation. It will also be easy to keep an eye on the developing pumpkins.

Of course, since the pumpkins will be growing up in the air, I’ll have to provide them with a means to support their own weight.

This might not be a concern for small pumpkins, like the tiny Jack Be Little variety I intend to try. But for larger pumpkins weighing five to 10 pounds, the vines won’t be strong enough to keep the heavy fruit airborne. I’ll have to fashion stretchy slings to support the pumpkins, essentially allowing the fruit to grow in the cradle of a hammock with ends tied to the welded wire.

Growing pumpkins vertically will be a fun challenge, and I’m going to put everything I can in my favor. I’ll plant them as soon as reasonably possible to give them the longest growing season. I’ll plant them in raised beds filled with rich compost and keep them thoroughly watered. I’ll keep them weeded and allow them to grow in open air.

And at long last, I’ll be able to keep my pumpkins safe from the deer. That might be the biggest advantage yet!