Co-owner Jim Lyons from New Jersey-based Blue Moon Acres tells us about supplying eye-catching microgreens to chefs and adding rice to the repertoire. 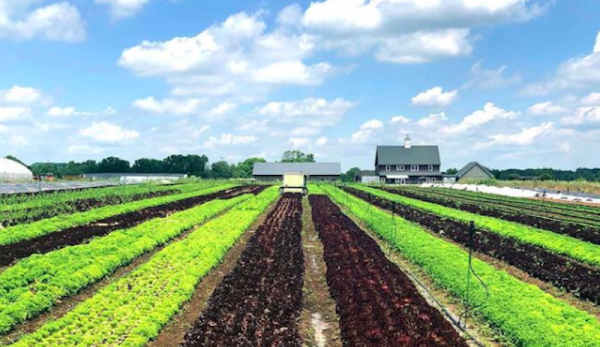 Since launching in 1992, the New Jersey-based Blue Moon Acres farm has cultivated a reputation as a premium producer of microgreens and, more lately, rice.

Run by owners Jim and Kathy Lyons, it turns out that a pesky parasite was partly behind the decision to found the venture.

“I had a moment when I went out west and contracted a parasite of some sort and my digestion got screwed up,” says Jim Lyons. “I don’t think it was ever properly diagnosed, so as a result of that I changed my diet.”

Lyons was studying macrobiotics in Boston at the time. “One of the big tenets of macrobiotics was always eat locally,” he explains. “It was also plant based. So I just became fascinated with the idea of growing my own food.”

We spoke to Lyons about breaking through with microgreens and battling weeds. We also got into chefs who manage to make plates of food look like artwork.

When Lyons looks back on the decision to make microgreens a key part of Blue Moon Acres, he recalls being inspired by a nearby farmer who was growing the tiny produce.

“We were very bottom line oriented at that point,” he says. “How can you farm and grow stuff and make a living at it? We had five acres and were trying to make a go of it as a CSA, and it was clear that financially that wasn’t going to work. So we went in the direction of microgreens.”

Read more: Learn how you can get started growing microgreens from someone who knows.

After growing an early crop of microgreens, Lyons called up his cousin who was managing the New York Yacht Club and asked if he could approach their chef.

“He gave us a few names, and I started making sales calls,” he recalls. “We had literally a 10 by 48-foot greenhouse. We started small and worked from there.”

Out of this year’s bounty of microgreens, Lyons says that he and his wife Kathy are pretty smitten with the micro watercress.

“We were just looking at the micro watercress and admiring how beautiful it is,” he says. “It’s really quite amazing. It’s so tiny, but it’s such a perfectly formed leaf.”

Read more: We’ve got the secret to crisp, flavorful watercress!

At first, Lyons says that he noticed chefs using Blue Moon Acres’ microgreens “primarily to adorn plates up at the very finest restaurants in New York City.” He adds with a laugh that, “Some were using it as an entire saladâ€”which was a pretty pricey salad!”

Furthering the idea of using microgreens as “a beautiful garnish,” Lyons explains how “we don’t always just eat with our mouthsâ€”we also eat with our eyes. That’s what some chefs are doing, making a plate that looks like artwork.”

In 2014, Lyons managed to pull off the surprising feat of growing rice in New Jerseyâ€”although he had to overcome an early setback.

“The first year was weeds!” he says. “My first year was a complete disaster. I thought I could stay on top of the weeds, but I was sadly mistaken. You had to get the weeds under control.

“This year I’m kinda having a problem with weeds again. It’s not like microgreens where you can get another batch going every few weeks. With rice, you really have just one year.”