A symbol utilized by pharaohs and kings, this beautiful flower has potential as a remedy, as well. 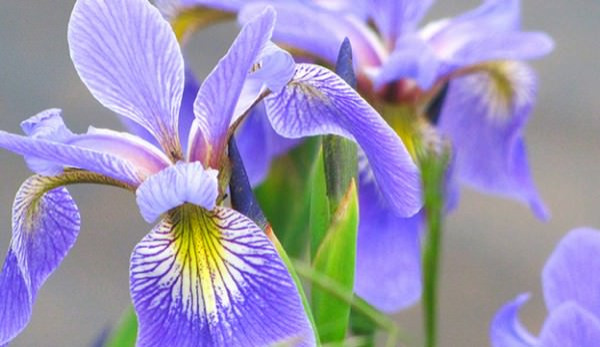 One of my favorite flowers of all time is the iris. When we first moved into our house, I ordered a package of about 50 different varieties. Unfortunately, we didn‚Äôt have all the garden designs figured out just yet so I wound up digging them into a temporary bed for safe keeping. I never moved those iris to a permanent location, so predictably, they bloomed beautifully for a few years and then one by one, the big showy blossoms failed to return until I was left with just one dwarf yellow iris.

Irises are not particularly fussy, but they do place specific demands on the gardener. Every few years they like to be dug up and moved around. If you don‚Äôt pick the blooms, the plants will often spread by their seed, though they more reliably spread by their creeping rhizomes. These rhizomes multiply and quickly fill a bed to the point of choking themselves out, which is what has happened in my case.

The iris has quite an amazing history. The Greek goddess Iris was a messenger between humans and Mount Olympus. It was said that whenever she was traveling, she left a rainbow trail in her wake. The word “iris‚ÄĚ came to mean rainbow, and it‚Äôs little wonder that this name was picked for the beautiful flower we plant in our gardens, as it can be found in just about every color imaginable.

The plant has been revered in many cultures. It is believed that the flower found on the brow of the sphinx is the beloved iris. The three main petals were said to symbolize faith, wisdom and valor and were used by the pharaohs and other leaders in their iconography. The yellow flag iris was the model for the original fleur de lis, which was the house emblem of King Louis VII of France.

My favorite irises are the purple varieties. I especially love the ones that I used to grow here on the farm. I never picked them, but spent a bit of each day with my nose buried in the velvet petals, the exotic scent hinting of rain and spice. In flower iconography, the purple flower symbolizes wisdom and compliments. It is the flower my husband brought me often when we were dating.

I have recently been studying the blue flag iris (Iris versicolor). The flowers on this North American native are smaller than the ones we typically grow in our garden. It likes to have its feet wet year-round and can be found in meadows or along streams and ponds. The Native Americans prized the rhizome of this beauty for both topical and internal applications.

Today, blue flag is best known for its ability to remove toxicity from the body while tonifying the lymphatic system. It has mixed reviews in the clinical crowds when it comes to safety. There are toxic compounds found within the plant, and too much of it will cause digestive upset. This is most likely the reason that blue flag isn‚Äôt a highly popular remedy just yet. It also isn‚Äôt something you‚Äôre going to harvest and use at home without a lot of study. It is easiest on the system when dried and, therefore, isn‚Äôt a worthy candidate for “food as medicine.‚ÄĚ

Concerns over eating or treating with the blue flag aside, there are few things more startlingly beautiful than a stand of these flowers in a meadow. It‚Äôs worth growing a family of them for yourself, as they are daily losing habitat. Saving a small spot for a plant that has entranced healers as far back as Pliny and the likes of kings and pharaohs may not make you any healthier, but it surely makes your garden more interesting.