There’s a secret to growing white asparagus, and anyone with an established asparagus patch can do it. 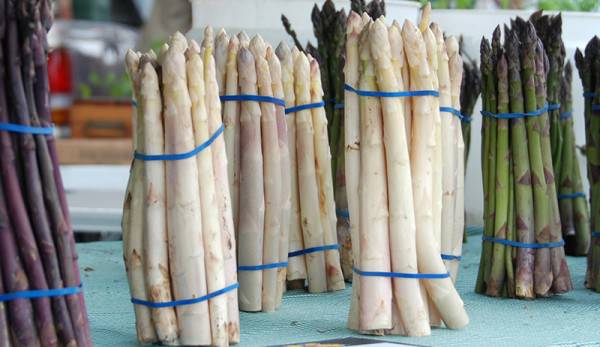 Asparagus season is nearly upon us, and while the fresh green spears of “regular” asparagus are a delicious spring treat, white asparagus elevates this staple spring crop to a whole new level. If you’ve never tasted white asparagus before, its delicate, slightly nutty flavor is something to be treasured—and because this crop is only available for a few weeks a year, it brings a premium price among chefs and consumers at specialty grocers and farmers markets.

Despite its high price, white asparagus is quite easy to grow, especially if you already have an established asparagus patch. You see, white asparagus is green asparagus, only blanched. It’s “created” by blocking all light from the growing spears. By keeping them out of sunlight, the chlorophyll in the spears doesn’t exhibit its typical green color, and instead, the emerging spears are pale, creamy yellow.

To grow white asparagus, you need to block all light from the growing spears. There are several ways this can be done:

In early spring, when the spears first start to break through the ground, invert a completely opaque plastic tub and place it over the plants. Make sure there are no holes in the tub—even small amounts of sunlight will prevent the spears from being completely white. Darker colored tubs work much better than lighter colored ones that may be somewhat translucent. Leave the tub in place, checking under it every evening and harvesting any spears that are 6 to 8 inches long.

Block light from developing spears by mounding soil up over them. One easy way to do this is to build a wooden frame out of 6-inch-wide wooden planks. The frame should completely cover the asparagus patch; it will look like an empty raised bed. As soon as the tips of the spears start poking out of the soil, put the wooden frame in place and fill it with six inches of soil. As soon as the spears start to poke out of the top of the extra layer of soil, carefully dig through the extra soil and harvest the blanched spears.

For smaller patches, block out sunlight by erecting wire hoops over the area and covering them with light-blocking fabric or foil. Dark, heavy blankets work, too, as long as they’re resting on the wire hoops and not on the tops of the growing spears.

And, if you just want to blanch a few spears, as soon as their tips emerge from the soil, put a 6- to 8-inch-long section of 2-inch-diameter PVC pipe over the growing spear, nestling it down into the soil a little bit. Fill the pipe section with soil or sand. When the shoot tips starts to poke out the top of the pipe, lift the pipe and cut the spear.