Noted for their docility and ease of hand milking, the Guernsey is a classic and reliable choice for dairy producers, especially family farmers. 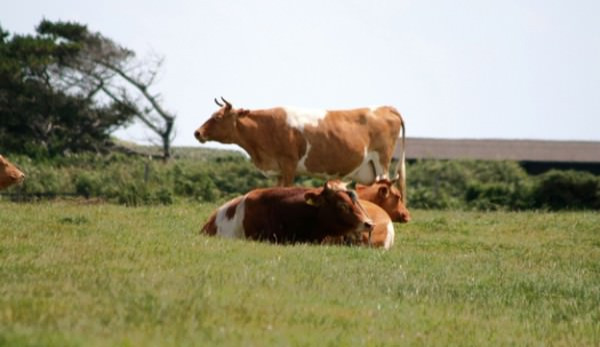 History: Guernsey cattle share a rich and colorful history with the Jersey and Alderney breeds, all of which evolved on islands located in the English Channel between England and France. Collectively they’re known as the Channel Island breeds; although the Alderney cattle are now extinct (the last few Alderneys were eaten by German Army soldiers during World War II). The story of the golden Guernsey begins around 1000 A.D. when Robert I, Duke of Normandy, sent a group of monks to the Isle of Guernsey to educate the natives and protect the land. They brought cattle with them: fine Norman and Froment du Leon from Brittany. With this seed stock, over time, they developed the Guernsey, which was considered a separate breed as early as 1700. In 1789, new imports were forbidden to protect the integrity of the pure island breed, a prohibition that still stands today. Early imports to the United States were misnamed Alderneys. On January 11, 1817, Richard Morris of Pennsylvania wrote: “I have upon my farm on the Delaware a cow of the Alderney breedâ€¦She has been fed in the usual way with potatoes, and during the last week the milk from her was kept separate, and yielded eight pounds of butter. The cow is a small animal, and is supported with less food than our ordinary stock. P.S. The cow is three years old.” Additional Guernseys soon followed and in 1877 admirers chartered the American Guernsey Cattle Club. Many of the cattle recorded in the club’s first herdbook were the inbred descendants of a single bull and cow imported from the Isle of Guernsey in 1830. Hundreds of additional Guernseys came to North America beginning around 1865 and continuing through the early twentieth century. The Guernsey was once America’s sweetheart dairy breed. Americans considered Guernseys such a hardy, productive breed that three Guernsey cows named Deerfoot, Emmadine and Klondike accompanied the Byrd expedition to Antarctica to provide milk for its intrepid adventurers.

Conformation: Guernseys are neat, intermediate-sized dairy cattle; the average cow weighs 1,100 pounds and bulls tip the scale around 1,700 pounds. Unless they’ve been de-horned (and nowadays most are) Guernseys have small, light-colored, dark-tipped horns. They come in one color: brown (ranging from fawn to golden red), nicely accented by white spots or white trim. Guernseys have yellowish-orange skin.

Special Considerations/Notes: Guernsey cows are noted for their docility and ease of hand milking, particularly in a family cow setting. In his book Oxen; a Teamster’s Guide, Drew Conway rates Guernsey steers best bets for novice drovers’ first teams due to their gentleness, intelligence, and ease of handling. Guernseys adapt to most climates and are especially noted for their heat tolerance. They are highly efficient grazers that require 20 to 30 percent less feed than larger cattle, while producing more milk per unit of body weight than any other breed, making them ideal for grass-based and organic milk production. Cows are noted for ease of calving and they produce well into their late teens.