The Guinea Hog has come to be known as a unique, American breed. The small, hairy hog has friendly disposition, popular with petting zoos--and their finely flavored meat, fattier than most breeds, is well liked. 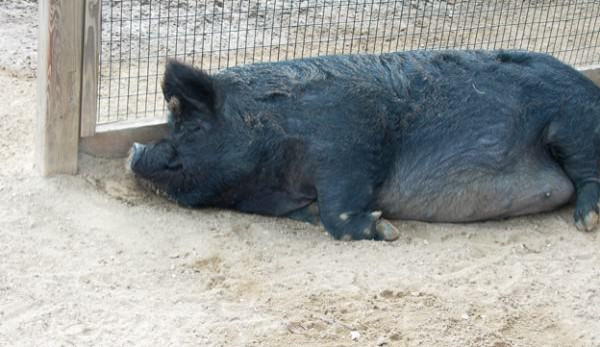 Use: With a docile disposition, they make an excellent homestead pig. Historically, Guinea Hogs foraged for their own food, eating rodents and other small animals, grass, roots and nuts, and cleaning out garden beds. They produce hams, bacon and lard.

History: Guinea hogs have had a plethora of names: Yard Pigs, Snake Eaters, Acorn Eaters or Pineywoods Guineas. Most believe they came from West Africa and the Canary Islands to America in conjunction with the slave trade. Guinea hogs are critically rare and can be found only in very small groups in a few states in the Southeast. It’s said that fewer than 200 now exist in the United States.

Conformation: They are a small hog, weighing between 85 and 250 pounds. They’re solid black with large pricked ears and a straight or very slightly dished snout. They’re hair rather than bristly and are flat backed, larger in the shoulder than in the ham. Described as a true miniature pig, Guineas are proportionate in stature, unlike the potbellied pig, which is a dwarf.