Gut health is a popular concern these days, and pigs are no exception—it pays to mind your pork bellies before they leave the farm. 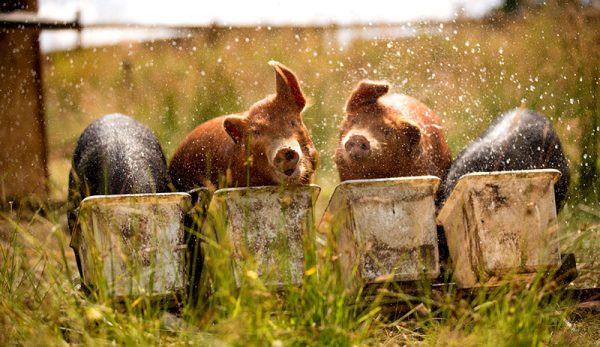 I’m on a fermentation kick, with intentional rots staged throughout the house. Some is beer and hard cider, sure. But there’s also pickles, bread, kimchi, sriracha and a gallon jar of kombucha tucked into the back of a dark cabinet. Fermentation is all the rage. This trend is inspired by evangelists such as Sandor Ellix Katz and Amanda Feifer O’Brien, and it makes sense—it seems like there’s a new study out every day stating the importance of one’s gut biome on various facets of personal health.

My interest was definitely piqued recently when I heard Kentucky poet and agricultural writer Wendell Berry muse wistfully on a podcast about fermenting home-grown wheat in a wheelbarrow to feed his hogs back in the day. I’d heard of this before. (Some people also ferment chicken feed.) We’d looked into fermenting corn for our pigs on the recommendation of an old-school farmer. (Fermentation predigests feed, freeing nutrients so animals get more from less.) But I’d never really considered keeping my pigs’ gut microbiomes as healthy as I try to keep mine.

Yet a new paper from FarmProgress, “Managing Pig Gut Health: An Overview,” suggests that we should very much consider our hog’s biomes. The paper contains pieces written by a handful of academics and contains some pretty high-level science terminology that, quite frankly, I don’t fully understand. But I found a few points interesting. They might be the reasons I revisit the idea of fermenting my pigs’ feed before I offer it.

If you’re curious about fermenting feed for your pigs to help build healthy gut biomes (and aid digestion), the process is pretty simple. Mix grain (grain screenings are a low-cost option) with water at a ratio between 1-to-1.5 and 1-to-4 in a vessel of some kind (wheelbarrow?), and let it sit for a few days in a warm environment. Fermentation should start in about 12 hours, and you can encourage it along with a lactic acid inoculation—add some sour milk, whey or kefir. The process should be complete in a few days, at which point you can give the liquid feed to your pigs.