When looking for farm animals, consider these easy-going grazers. 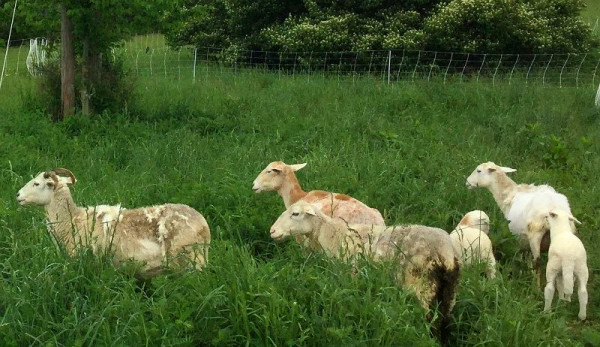 Over the years we have raised various animals for livestockâ€”pigs, goats, chickens, you name it. But busy vegetable farmers just hoping for a simple project, time and again we mostly found livestockÂ to be more of a hassle than a satisfying venture. We eitherÂ lacked the requisite infrastructure, the time to chase them around when they jumped the fence, or the right forage. However,Â there was always one exception: We loved raising hair sheep.

We recentlyÂ picked up a starter flock for our newÂ farm, so I thought I would give a little rundown on why I think that hair sheepâ€”that is, sheep meant for meat, not woolâ€”may be the perfect starter livestock.

One of the beautiful things about herd animals, like sheep, is that in case of an emergencyâ€”for example,Â a storm knocks the fence down and the animals get outâ€”getting them back in is relatively straight-forward. Sheep can be “pushed” from behind by simply walking behind them, and they generally stick together. Of course, you can definitely run into ornery sheep who will do as they want, but this is a good reason to buy your sheep from a trusted source who rotates them regularly.

Hair sheep, which generally have a thinner coat than wool sheep, can be trained to portable electric fence and/or electric wire easier than most animals. This is essential if you plan to rotationally graze them, as we are. Inevitably, you will forget to turn your fence on from time to time, but if the sheepÂ have learned that the fence â€ťbites,â€ť they will generally avoid it. (This only goes so far, though. You have to keep that fence charged as they will test it again).

The Infrastructure Needed Is Minimal

Depending on the size of your herd, sheep do not require a lot of infrastructure. We use portable electric fencing with a small solar charger. We also borrow a small cage that fits in the back of a pickup for transport. As for handling facilities, we will just use a couple steel fences against a barn. It’s pretty simple. You can certainly make your management much more complicated, and with larger herds, you may need to, but this is one of the reason they are perfect beginner livestock. The upfront investment is just a few hundred dollars worth of fences and chargers, which can be set up and taken down in minutes.

Sheep just want to eat. Although any animalÂ can become spoiled, sheepÂ are not curious about treats like goats or pigs. More often than not, they would prefer to be left alone to graze. This may not be as attractive of a quality for families wanting something between a livestock animal and a petâ€”no judgement here, we love a good pet-able animalâ€”but for anyone who has a commercial garden or just wants some mowing done, sheep are a nearly perfect animal for simply doing the job you need them to do. In our case, mowing and making meat.

Unlike cattle that take two years to be mature enough for breeding and then 10Â months for gestation, sheep can be breed within six to eight months and haveÂ roughly a five-month gestation period. Theoretically, youÂ could have two lambings a year. We avoid this because it would be pretty rough on the mama and lambs, but it’s technically possible.

Sheep are also relatively easy to sell either as livestock or as meat. If you can get them trained to electric fences, that can be a postive qualityÂ for selling them live. In the case of our farm, we specifically sought out sheep that were trained to electric fencing (sometimes called electric netting) and electric wires because training an older animal can be challenging. We wanted animals that would Â immediately take to our program, and they did. If you have to train them, try to keep them in an enclosed area until they get used to the fencesâ€”at first they may very well get tangled up and tear it down, but being sheep, thus very agreeable, they will learn fast.

As for meat, ground lamb is an easy sell for many people and can easily be tacked onto your veggie CSA if you have one or sold at market. Perhaps you can sell whole lambs or specific cuts to chefs. When it comes to sheep, there are almost too many marketing possibilities to count.