The Hamburg chicken is a dependable layer but shy of people. Hens will lay an abundance of small white eggs year-round. 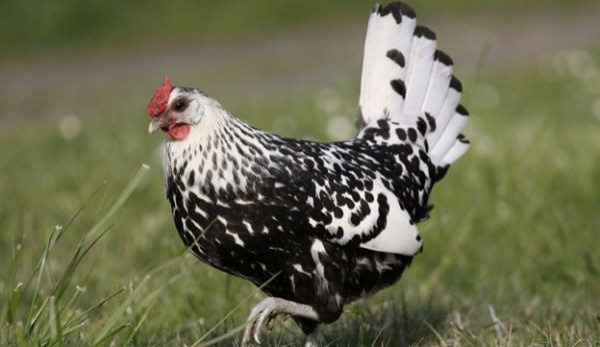 Use: The Hamburg chicken is a dependable layer but shy of people. Hens will lay an abundance of small white eggs year-round. Their dark-colored bones make them undesirable market birds.

History: The origins of the Hamburg chicken breed are somewhat unclear. Some experts agree that they were originally bred in Holland and Hamburg during the 1840s, while others believe that they are a much older breed that started somewhere in the Mediterranean, most likely Turkey. The British and Dutch strongly influenced the Hamburg varieties we see today. The chickens have strong flying abilities and were once thought to be the result of a cross between common chickens and pheasants. Because of this likeness to pheasants, the Hamburg was once called pheasant or pheasant fowl. The breed was accepted into the American Poultry Associationâ€™s Standard of Perfection in 1874.

Special Considerations/Notes: Hamburg chickens are quite flighty so a fence or large enclosure is required for keeping them out of the tall trees where they love to roost. Large coops and free-range environments are best for keeping them, as they do not do well in confined areas. They are not especially friendly and tend to prefer the company of other chickens to that of humans; however, they make up for this in their dependability as layers. The Hamburg chicken is listed in the Watch category of the American Livestock Breeds Conservancyâ€™s Conservation Priority List.