Hobby Farm Hacks: Use a Hand Saw as a Soil-Preparation Tool

Are you fond of farm hacks? Using an old, dull hand saw as a tool for soil preparation might seem far-fetched, but it can be surprisingly effective. 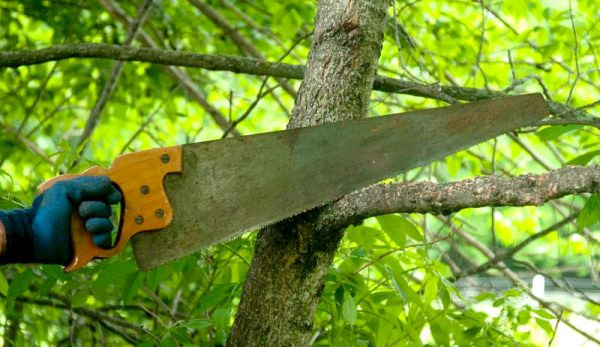 As hobby farmers, we all love â€śhacksâ€ťâ€”innovative ways to do things that often combine common tools or items with outside-the-box thinking. For example, these six garden hacks that reuse nylon stockings, or these 15 hacks applicable to many different areas of farming.

Of course, you must use caution when putting things to use in unintended waysâ€”safety concerns, you knowâ€”but I do have one creative hack Iâ€™ve put to good use on several occasions, and Iâ€™d like to share it in case you might find it helpful too.

It involves using an ordinary hand saw as a combination rake/cultivator. While clearing small trees from the edges of my farmâ€™s fields, I like to keep an old, dull saw by my side for scraping away leaf debris, small branches, and various weeds growing between the young treesâ€”in part so I can see to cut the trees down at (or just below) ground level, and in part to clear the soil to allow grass to grow again.

The simplicity and all-in-one nature of this hack is what I find appealing. By placing the saw blade teeth-down into the soil and pulling it along perpendicular to the direction of the blade, I can easily scrape away loose debris while simultaneously snagging small plants to chop them off at ground level. With a few quick passes (and assuming nothing is rooted too deeply), itâ€™s easy to reduce the ground to bare soil.

For removing large amounts of loose material, itâ€™s not as fast as a rake, but itâ€™s more thorough, and debris doesnâ€™t get stuck in the saw teeth the way it can in between rake tines. For removing weeds from the soil, itâ€™s not as effective as a cultivator (for the most part youâ€™re not really pulling them out by the roots), but it makes a good start and can quickly reduce an area down to bare soil that can then be worked with other tools.

As strange a hack as this might seem to be, Iâ€™ve found it to be surprisingly effective. Several years ago, I cleared a large number of sapling trees from the edge of a field, which left behind an area of ground covered in leaf debris but very few plants. As I cut down the trees, I also worked on clearing the ground, section by section, with my dull saw, which eventually produced a sizable area of bare soil. I could have tried to reseed the area with grass, but instead, I just left it alone and trusted that the grass from the adjacent field would colonize the area quickly enough.

Believe it or not, thatâ€™s exactly what happened. Nowadays, the area supports a lovely selection of grass and flowers, whereas a nearby section of ground that I did not meticulously clear with my hand saw (leaving the leaf debris instead) is coming back with more weeds than grass.

Is this whole idea kind of unusual? Maybe. But itâ€™s a great way to put an old, dull hand saw back into use, and itâ€™s certainly been working for me.