Happy Campers — How to Travel With a Cat

Photo by Audrey Pavia Cheddar enjoyed his camping trip this weekend. One of the perks of being a professional writer is that you get to research the stuff you are writing about. When the editors of Cat Fancy magazine agreed to have me write an article on traveling with cats for their August 2012 issue, […] 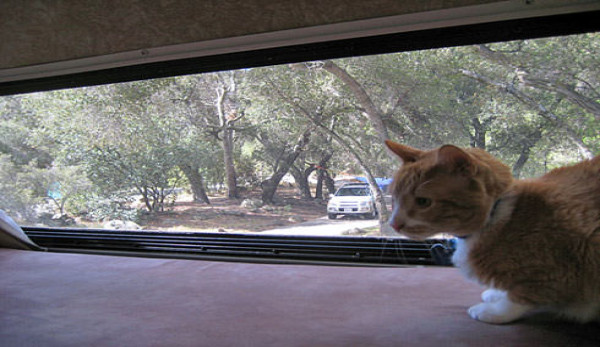 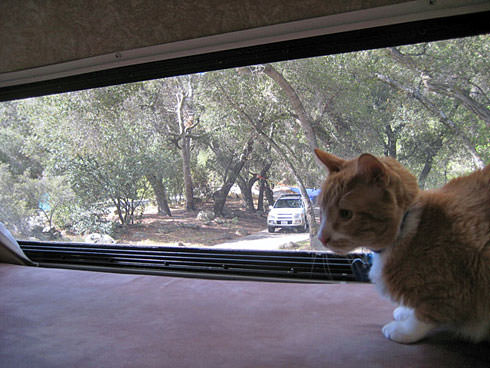 One of the perks of being a professional writer is that you get to research the stuff you are writing about. When the editors of Cat Fancy magazine agreed to have me write an article on traveling with cats for their August 2012 issue, I thought it was a great opportunity to see what it would be like to go camping with one of my cats.

So, this past weekend, I loaded up a rented RV with my Corgi, Nigel, and my cat, Cheddar, and hit the road.

Some thought went into deciding which one of my cats would join me on this adventure. After mulling over the personalities of my cats, Cheddar was the obvious choice. He is the bravest and most mellow of all four of them, and the one most tolerant of change. He is also the one who was most oblivious to Nigel. It turns out he was the right one.

After driving nearly 200 miles to get away from Los Angeles, my critters and I spent the weekend in the Ojai Valley, at a campground called Wheeler Gorge. Located in the oak and chaparral-covered hills above the quaint town of Ojai, our campsite was right next to a bubbling creek.

The RV was wonderful, with a bathroom, stove, microwave and refrigerator. The bed was comfortable and easy to fall asleep in, even after being woken up by Cheddar in the middle of the night; he was walking on my head.

Nigel always enjoys an outing, although he was not too pleased when the smoke alarm went off while I was cooking on the stove. The piercing beep must have hurt his ears because when I opened the door to let fresh air into the RV, he bolted out and took off. I had to chase him to catch him, something I’ve never had to do with this very well-trained Corgi. Cheddar, on the other hand, couldn’t have cared less. He just gazed in the direction of the smoke alarm with wonder. I actually considered for a moment that he might be deaf until I remembered that he always comes when I call his name

The weather on our first day was pretty rainy, so we spent most of the time cozy in the RV. Cheddar was happy to explore every nook and cranny of the cabin, and was only concerned when the heater came on the first time. His tail got puffy and he skulked around for a few minutes until he decided the air coming from the floor vents was no big deal.

Our last day in camp dawned bright and sunny, with big puffy clouds floating by in the brisk breeze. Nigel sunned himself next to the RV while I meditated on the sky until it was time to head home.

When we got back to the house and I brought Cheddar inside, he acted as if none of this had happened. He walked right in, past the other cats, who stared at him in wonder. His brother, Stanley, hissed at him a few times, indicating that Cheddar must have smelled like an RV instead of his usual self, but other than that, it’s as if he never left.

After this adventure, I’ve decided that camping with a cat is a good idea, providing you have an RV and a cat who likes adventure. Seems that nothing beats snuggling in the wilderness with your favorite feline.