Photo by Jessica WalliserI accidentally grew All Blue potaotes in the compost bin, and they did better than the ones I purposefully planted in the garden! I’m secretly hoping for an early frost this year, namely to kill off some of the stink bugs before they make it inside but also to put an end to […] 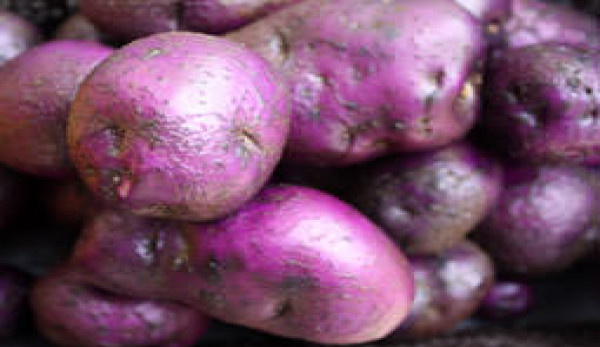 I’m secretly hoping for an early frost this year, namely to kill off some of the stink bugs before they make it inside but also to put an end to my weeding misery. We still have an incredible amount of weeds in the flower beds. I’ve been trying my best to keep up, but it simply seems endless. At least if we get a few hard frosts, they will die back and I can cover them with newspaper and some shredded leaves and hopefully forget about them. Haha.

I headed to the garden late last week to dig up the last of the potatoes. They are the All Blue variety, and I got a very nice harvest out of them. I had a bunch of potatoes that we never ate last winter and just decided to plant those rather than buy brand-new seed potatoes. There were enough for about two rows in the veggie garden.

I threw a bunch of rotten and moldy ones into the compost pile this spring, too, thinking that they were too far-gone to sprout. But low and behold, they grew and have produced more potatoes than the ones in the garden did! And they took forever to die back—weeks more than the plants in the veggie patch. I think the extra weeks of being green led them to produce larger tubers, too. Again, they were way better than the ones I planted intentionally.

I’m thinking I’ll probably use the same technique again next year. Why mess with success? I’ll just toss the potatoes on top of the fall-collected leaves in the compost bins, throw the old chicken bedding and nesting straw on top, and wait. Sooo much easier than digging and then hilling them in the garden!