Hatching A Hobby With Some Brand-New Chickens

For Andrew Krueger, a school project turned into friendship and, eventually, a flock of nine chickens at home. Read his story in this edition of "Chicken Chat." 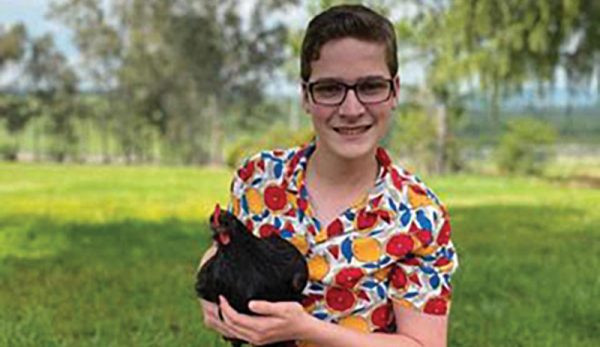 My journey with chickens started on a cold January morning in 2019. My mother dropped me off at high school on the first day back from Christmas break. I decided to take the back way into school through the agricultural department, which included my fourth-period class.┬Ā

Walking by the back door, I suddenly remembered that our teacher had announced before break that she had ordered baby chicks! I hurried to the window and saw a horse trough with a single lamp glowing on the other side of the classroom.┬Ā

I waited anxiously for my teacher. She finally came around the corner and confirmed my suspicions. I rushed inside the second when she unlocked the door.┬Ā

As soon as I got there, all noise ceased. Thirty pairs of beady little eyes stared back at me.

Then school started. I had to wait an agonizing three hours before I could see them again.

When class finally started, all of my classmates immediately flocked to the brooder. They were all giddy, giggly and googley-
eyed over the fluffy chicks.

After we were seated, our teacher took them out, and we all got to hold them. That was just the beginning.

Read more: 2020 was a big year for chicken-keeping. Read one family’s story of opening their lives to chickens!

When the chicks got too big to stay in the tiny brooder, my teacher separated them into multiple brooders in the schoolŌĆÖs unused greenhouse.

Now the class had a new job: tidy up the new coops that the woodworking class built to get ready to accept their new occupants.┬Ā

After a little weeding, they were soon full of clucking companions. We were taught how to hold them properly. But because they werenŌĆÖt handled much when young, they flapped around and squawked (or rather, shrieked!).

Oddly though, one of them, a Black Australorp, was very calm and didnŌĆÖt make a peep despite being held for a while. I was the lucky winner to acquire that chicken, and soon she became my ŌĆ£fowlmate.ŌĆØ

ŌĆ£I am going to name her ŌĆśMal,ŌĆÖŌĆØ I said proudly. Her name was inspired by a recently watched veterinarian show, which had a patient that looked just like her. She was the bird that prompted me to do our project for the ag showcase, which was to be displayed to incoming eighth-graders to show the unlimited opportunities of what one could do when they join FFA.

The projectŌĆöan exhibition on the different breeds of chickens we had. The star of the showŌĆömy Mal.

Read more: Want to show your chicken at a poultry exhibition? Here’s how to start.

Five months after my first encounter with those baby chicks, my teacher wrote a notice on the whiteboard. The chickens, it read, would be sold in a couple weeks.

I frantically texted my mom to tell her of the news. We were finally moving to our new forever home.

I quickly bought Mal and some companionsŌĆöanother Australorp (Dory) and three Welsummers (Patricia, Betty and Summer)ŌĆöand my dad and I bought and assembled an old-fashioned-looking coop. This structure would accommodate Mal and her few friends.

Nineteen months and nine chickens later, I look back on that small project that happened not so long ago. We ran into many bumps in the road, losing some feathered friends, unexpectedly acquiring some roosters, and even experiencing flying problems (have you ever seen a chicken in a tree?!).┬Ā

The one thing I learned, though, is that chickens arenŌĆÖt merely creatures created to lay eggs. They are more like people, with their many different and unique personalities, and the ability to pick us humans up when we feel down.

And you have to be very careful when you start keeping chickens, as you could start learning how to do chicken math!┬Ā

Chicken Chat is a reader-submitted feature in every issue of Chickens magazine. Email the story of your chickens in about 750 words to chickens@chickensmagazine.com (subject line: Chicken Chat). Be sure to include high-resolution images or photos of yourself, your chickens and/or your coop. The author of each issueŌĆÖs published essay will receive a prize from one of our sponsors. See magazine for rules.