Even a small farm can go through hundreds of small square hay bales in a season. A hay elevator can save time and effort stacking those bales. 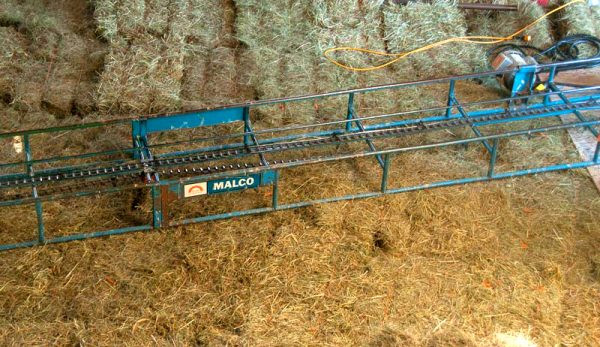 If you keep livestock on your farm, then thereâ€™s a good chance youâ€™re familiar with the small square hay bales that are a major food source for animals such as horses and goats. Maybe you purchase them in large loads from local suppliers, or maybe you bale your own hay from the fields on your farmâ€”a strenuous, though thoroughly satisfying, task.

If youâ€™re familiar with small square bales, then youâ€™re probably also aware they are only â€śsmallâ€ť when compared with large square bales or big round bales, which canâ€™t be moved by hand. A typical small square bale might weigh 50 pounds or more, and because livestock (particularly horses) quickly eat through a single bale, even a small farm with just a few animals might go through hundreds of bales in a single year. Thatâ€™s a lot of hay.

Of course, all of that hay has to be stacked and stored somewhere out of the weather, and while itâ€™s possible (with enough helpers) to stack hundreds of bales by hand, youâ€™ll find that the process can proceed much smoother if you have a hay elevator to help you.

What exactly is a hay elevator? As the name implies, itâ€™s a piece of equipment designed to transport hay bales from one point to another. Essentially, a hay elevator is a long, metal conveyor belt, with the â€śbeltâ€ť resembling an oversized bicycle chain with teeth for grabbing hold of bales and carrying them along the track. Once the bale reaches the end of the track, it gets dropped off for a human to pick up and deposit on the stack.

A hay elevator canâ€™t stack hay for you, and despite its name it canâ€™t lift bales straight up and down, but depending on the strength of the motor, a hay elevator should be able to lift two or three bales at once up a 45-degree angle. This can be a life-saver if youâ€™re storing hay in the loft of a barn, or if youâ€™re producing a very tall stack. Allowing the hay elevator to move the bales to the appropriate height saves a lot of time and effort.

Of course, a hay elevator is powered by electricity, so thatâ€™s something to consider if you plan to use it in a location that doesnâ€™t offer electrical outlets. In this case, you need a portable generatorÂ to provide power, and because hay elevators and generators tend to be, well, very noisy, also consider someÂ noise-cancelling earplugs or earmuffs as well. But hey, thatâ€™s a small price to pay when you consider the many advantages that a hay elevator can offer.