Feed Your Hogs Hay? In Some Cases, It Makes Perfect Sense

Hay can be a great supplement to your pastured pig program. Here are tips on what kind of hay to feed and how to get your pigs to start eating it. 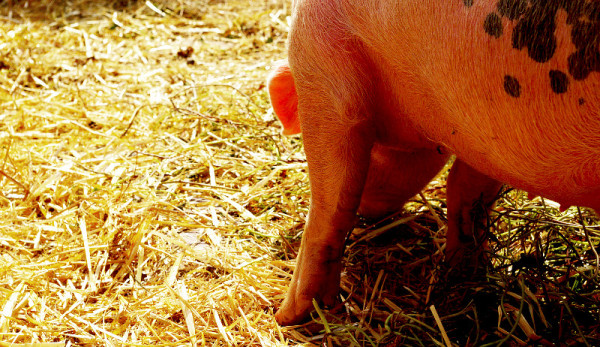 Some years ago, I met a fellow pig farmer who raised pastured, heritage-breed Guinea hogs. I’ve never considered Guinea hogs an option on our farmâ€”their small size, lard-pig classification and slow growth rate aren’t traits conducive to our market operationâ€”but I was curious about the pasturing element of his endeavor. “Pasturing” is a loose term that can mean many things, including raising pigs outside on feed and making pigs raise themselves on grass and foraged edibles. Our farm is somewhere in the middleâ€”we offer feed but work to keep the animals on fresh grass as much as possible.

“What about winter?” I asked. I know that raising a pig on pure pasture takes two years, so I understood this man’s Guineas would see a couple of cold seasons.

It made sense, of courseâ€”cows get it in the winter, so the same would hold true for grass-fed pork. But because I don’t have two years to raise pigs before taking a herd to market, I filed the information away in the “curious facts” section of my brain.

But recently my family farm got a few heritage piglets, and, as heritage pigs are wont to do, they’re growing mighty slow while our bacon reserves dwindle to dangerously low numbers. So we asked a fellow farmer what we could do to help them put on weight faster. His advice?

How To Feed Pigs Hay

First is the question of whether pigs can be offered hay at all. Remember the old idiom calling into question the validity of the very idea:

Hay is for horses.
Better for cows.
Pigs don’t eat it
‘Cause they don’t know how.

Well, sort of. Pigs love grass, hay is dried grass, ergo pigs should love hay. But in reality, pigs don’t intrinsically appreciate it the way they do a pasture of green grass. It’s probably for the same reason you might not salivate over canned green beans the same way you would a fresh-from-the-garden Kentucky Wonder: They’re just not as good.

Pigs are apt to turn their snouts up (or, more likely, root around in and play with) hay when first offered it by the well-meaning farmer because, as they rhyme goes, they don’t know how to eat it. Don’t give up, thoughâ€”pigs are smart, and you can train them.

One common solution is to simply remove all other options, letting the animals’ hunger drive them. I don’t love this idea for a few reasons, not the least of which is that I still need to offer feed. Another option is to assist the pigs in recognizing that hay is viable foodstuffâ€”mixing in feed or scraps, for example, or pouring molasses on top.

It’s also important to consider pigs’ size. Piglets lack jaw strength and the appropriately size digestive tract to make good use of hay, so it’s best to incorporate it at the grower, rather than weaner, stage.

It’s also important to consider what hay you’re offering your swine. For starters, ensure you’re offering hay and not strawâ€”as obvious as this might seem, some still stand to learn the difference between the two. Hay is nutrient-dense dried grass, legumes and brassicas; straw is low-cost, empty fiber tubes great for animal bedding but useless as a feed. Don’t feed your pigs straw.

Second, recognize that different types exist, and swine digest it differently than ruminants (sheep, cows, and so on). For a pig, hay is a low-calorie meal, and they benefit best from leafy hay with some protein in the mixâ€”legumes such as clover and alfalfa are great for growing pigs, so seek out hay with plenty of extras for your herd.

And, finally, while I’m looking to supplement controlled rations for quicker growth, you might want different things from a such a program, including a scale back or even elimination of feed from your pigs’ diet, which will call for a bit more attention to dietary needs. Just make sure your animals’ lysine needs are met, either through feed or dairy, and boost whatever you offer in the winter to meet the heightened calorie requirements cold weather brings.