Still in Use: A Hay Rake So Old It Can Be Horse-Drawn

This John Deere 594 could be 75 years old but it still serves admirably thanks to simple design, ease of use and the fact that it just plain works. 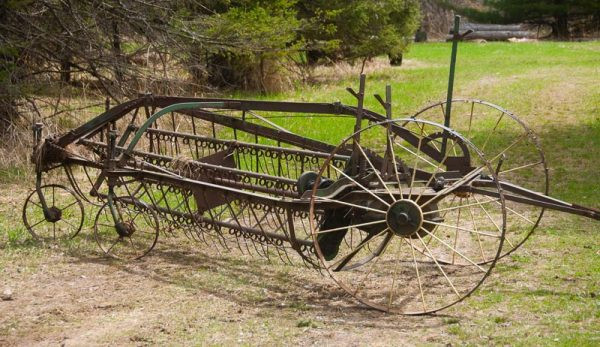 Hay season is officially under way on my northern Wisconsin farm. We started a few weeks ago with some of the faster-growing fields, but that was a relatively small project compared with last week, when we put up about 600 small square bales in two days, with plenty more still to come.

You know the common lament that they don‚Äôt make tools and machines the way they used to? Maybe there is something to it, because I‚Äôve found old farm machinery to be remarkably durable and useful. One of our main tractors for making hay is a Massey Ferguson 135 that‚Äôs nearly 50 years old, and one of our hay rakes‚ÄĒwhich works beautifully‚ÄĒis a John Deere 594, which is so old that you can adjust it for use with horses.

Our 594 came with the farm. Its ‚ÄúJohn Deere Green‚ÄĚ paint wore off long ago (it‚Äôs more of a ‚Äúrusty brown‚ÄĚ color these days. But that doesn‚Äôt affect its performance, which is hard to complain about.

Dating back to at least the 1950s if not earlier‚ÄĒthis model was manufactured for many years‚ÄĒthe 594 is described as a ‚Äúside delivery‚ÄĚ rake and differs from other rakes. It has two large steel driving wheels at the front and two smaller wheels at the back. The rake is supported entirely by its own wheels and doesn‚Äôt require a tractor to hold up the front end. This is understandable because parts were available that would change the tractor hitch into a horse hitch (complete with the addition of a seat for the driver), and having the rake support itself would have taken an unnecessary strain off the horses pulling the rake.

Of course, there are some elements of the 594 that could be a little bit better. Its steel wheels don‚Äôt grip very well on mild slopes. And it occasionally has trouble raking through the thickest sections of hay. But for a rake that could very well be closing in on 75 years old, it‚Äôs performing admirably. It is a valuable piece of our hay-making collection.

It‚Äôs also tough enough and simple enough that on the rare occasion when it does have an issue, it‚Äôs relatively easy to fix. One summer, the tongue broke in half the day before a major day of haying. Fortunately, one of our friends came to the rescue with his welding equipment. We worked into the night to repair the rake in time for the following morning. The weld worked perfectly, the rake did its job, and it continues to serve us well.

On a humorous note, I was recently walking through the back woods on our farm, exploring one of the large rock piles left behind from clearing the fields many years ago, and I stumbled across a large pile of broken rake tines for the 594. They had evidently been deposited there years ago by the previous owner of the farm. That’s further evidence (if any was needed) of the hard work that our rake has performed for decades.