4 Uses For A Hay Wagon (Besides Moving Hay)

A hay wagon can be used for so much for than just carrying hay. Moving big objects, harvesting and recreation are some ways you can use your hay wagon. 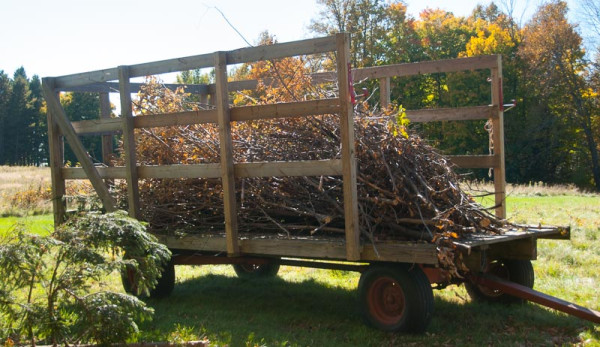 In my opinion, every farm needs to have at least one hay wagon. Regardless of whether you bale your own hay, these large wagons are useful for so much more than their stated purpose of transporting hay.

If you want to take advantage of your hay wagon on a more regular basis, here are a few ideas to help get you started.

Aside from moving hay, transporting debris is definitely the most frequent use for my hay wagons. And when I speak of debris, Iâ€™m talking about tree debrisâ€”branches, trunk sections, stumps, you name it. On a farm full of trees (including several small pine stands that are reaching the end of their lifespan), thereâ€™s always plenty of debris to clean up and carry away. Add the fact that I often prune back the edges of fields (producing large piles of branches and small trees), and you can see why my hay wagons are in near-constant use. In fact, allow me to revise my original statement: I think my hay wagons are used even more for transporting tree debris than they are for moving hay.

Just recently I needed to move a dozen corral panels a lengthy distance, so rather than carrying them by hand (feasible for short distances), I loaded them on to a hay wagon instead. There were a couple of ways I could have arranged the load, such as laying the panels flat across the wagon platform and tying them down, but because I didnâ€™t want the panels to slide around, I arranged them in their upright position, tying the panels to the sides of the hay wagon so that they wouldnâ€™t tip over. After that, moving them across the farm was simple.

Of course, with any large and heavy load like this, be safe and ensure that everything is tied down appropriately. Be careful.

This is one of my favorite alternative ways to use a hay wagon. By driving the wagon alongside full-sized mature fruit trees, you can stand on the wagon to gain a height boost that will help you reach more of the fruit. Throw in a fruit picker with a telescoping pole (something like this one) and youâ€™ll be good to go. Just be careful not to fall off the wagon while reaching for the highest fruit.

Sometimes when youâ€™re busy working all the time itâ€™s easy to overlook the joy that can be found in seemingly mundane tasks. You might spend all summer traveling around on a hay wagon, stacking bales and unloading them into your hay barn, but the experience is completely different when you set off on a just-for-fun hay ride. Throw a few bales on for seats, invite your family and friends to join in, and fire up the tractor for a simple excursion around your fields. Take the most scenic route, sing songs and have fun.

Have you developed any alternative uses for your hay wagon? Describe them for us!