Upgrade Your Hay Wagon For Ease Of Use & Other Benefits

Most hay wagons are relatively simple, but with a few DIY modifications, you can upgrade your hay wagon to make it even more useful. 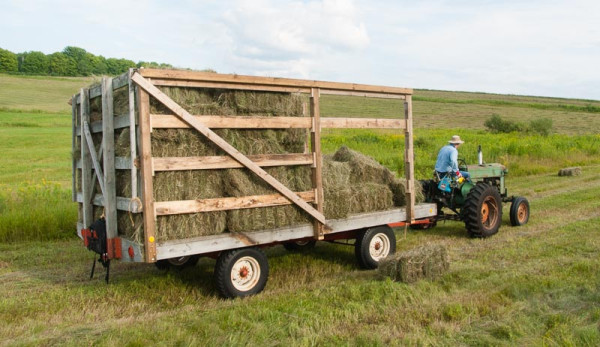 Few farm vehicles are simpler than a hay wagon. Its one of the farm tools for which I’m most thankful. Essentially, a typical hay wagon is a large platform with a vertical wall on the back and a couple of diagonal beams to firmly secure that wall to the platform. Stick a metal frame with wheels and a tongue underneath, and you have yourself a hay wagon.

While this design is simple and concise, there are times when you wish hay wagons offered slightly more in terms of features and amenities. Thatâ€™s where DIY projects come in.

Adding a few DIY upgrades to your hay wagon will not only make it more useful (and maybe even safer), but it’s also a fun task for anyone who enjoys such projects.

A couple of years ago, I added a few upgrades to one of my hay wagons. First, I used large bolts to attach four wooden posts to the sides of the wagon. I put two on each side: one near the front of the wagon (about a foot away from the front of the deck) and one right down the middle.

Once the posts were in place, I installed guard rails running along the sides of the wagon. These would serve two purposesâ€”first, they’d help protect people riding the wagon, and second, they’d make it much easier to stack tall loads of hay bales on the wagon.

But simply attaching a few planks to the posts wasnâ€™t the goal. Instead, my father (who is much more skilled with construction projects than I am), fashioned a number of thin U-shaped wooden cradles that we attached to the posts. These cradles were designed to hold in place the planks that would comprise the guard railings of the wagon, with the added benefit that each plank could be removed individually if you wanted more room for loading or unloading hay bales from the sides of the wagon.

After using this upgraded wagon for a couple of years, I can safely say Iâ€™d never want to go back to a wagon without sides. Not only is the design perfect for haying, it also makes the wagon more ideal for other projects, including one of my favoritesâ€”cutting down invading trees and hauling away the debris.

Adding sides to the hay wagon has offered other unforeseen benefits. For example, because the wagon now has three sides, we sometimes string a large tarp across the top, providing shade on hot days for anyone working on the wagon.

This particular DIY project has been a thorough success.