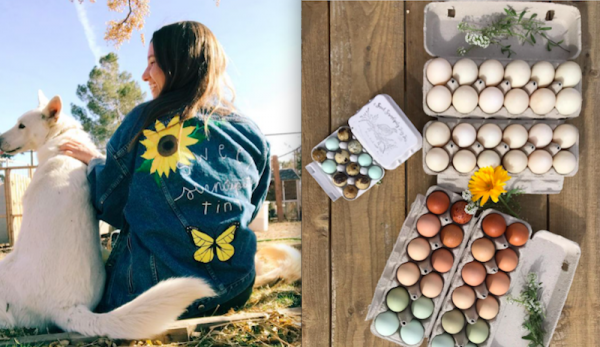 When founder Shar Hinson’s father passed away, she found herself feeling “this hole in my heart that needed to be mended.” As a form of healing and catharsis, Hinson came to realize that she had to “fix it the only way I knew how for my mom and meâ€”which was through animals.”

We spoke to Hinson about why chickens play such a focal role on her farm and her most in demand color of eggs. We also got into the case of her pigs trying to steal duck eggs.

Building up a Tiny Farm

“It started off with my boyfriend buying me two goats and four ducks. And that turned into 12 chickens and 14 ducks,” recalls Hinson when she recaps the roots of Sweet Serendipity Tiny Farm. “Now four years later, there’s six goats, 30 ducks, 30 chickens, 14 quail, two pigs and six geese.”

Read more: Ducks and geese are great livestock for a permaculture operation.

When it came time to officially name her tiny farm, Hinson says she knew she wanted to chose a title with deep personal significance.

Chickens are an integral part of Sweet Serendipity Tiny Farm. Hinson says they “became the focus of the farm just out of chasing the rainbow eggs.”

She adds, “A lot of people don’t realize where their food comes from. Discovering that eggs can be blue, green, burgundy, pink and all other colors makes people excited and supportive of homesteaders and farmers.”

It also “gets people engaged” when they realize that the farm’s food can “differ in colors than just the norm at the grocery stores.”

When it comes to favorite egg colors, Hinson says it’s either a case of “olive eggs all the way” or “a heavy-bloomed Maran where the deep brown egg looks purple or pink.”

Selecting her chickens of choice, Hinson picks Olive Eggers. “From breeding different generations of Olive Eggers, you can get really light olive-colored eggs to deep forest green eggs and also some grey and rust colors.”

She also mentions how “they look so striking in an egg carton for people to enjoy.”

The Case of the Missing Duck Eggs

Along with the roaming poultry, farm is home to some Kunekune pigs. It turns out the the pigs are entrusted to Hinson’s four-year-old niece, who’s also become an official “farm helper.”

Talking about the relationship between the various animals, Hinson recalls how “when we first got the pigs they were raised with the ducks and loved it until we noticed they were stealing the eggs.”

The chickens, Hinson adds, are especially partial to “going into their pen to scratch around and for the occasional naps on the pigs’ backs.”