A flock of hens will naturally establish a pecking order, but in some instances it's possible for a hen to develop the traits and behaviors of a rooster. 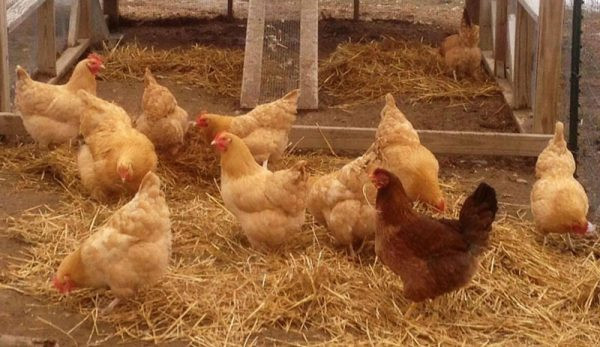 My friend Tamara and her husband, Bill, have kept a small flock of Orpingtons and Wyandottes for six years now. That’s just about the same length of time they’ve kept their small flock of children.

Tamara’s sons, Thomas and Calvin, have known hens their entire lives. The boys help feed the girls and collect their eggs. And they often hang out in their backyard, watching the chickens’ antics.

Being imaginative little boys, they come up with the wildest stories from time to time. Tamara therefore didn’t believe Thomas when he ran in and breathlessly announced that their largest Buff Orpington hen, Goldie, was crowing.

To Tamara’s shock, Goldie was indeed vocalizing as if she were a rooster. To Tamara’s horror, this wasn’t the only male trait that the Orpington hen had begun to manifest. “I had to buy hen aprons for the rest of the girls!” she wailed to me. “Goldie’s tearing up their backs with her talons! They don’t have any feathers left. And she’s a hen, doing this!”

Tamara told me that she inspected Goldie to make absolutely positive she was indeed a hen and not a rooster, even though she’s had Goldie for almost two years now.

“She’s definitely a girl!” she informed me. “What’s wrong with her?”

Every flock, regardless of size, follows a social hierarchy called a “pecking order.” The term, which actually derives from observed avian behavior, describes how rank is establishedâ€”literallyâ€”within a group of chickens.

The head, or alpha, female will often show dominance over the other hens in her flock by pecking at them. She will also crow to solidify her place as their protector, especially in the absence of males in the flock. This kind of behavior is perfectly normal in an all-female flock.

Just keep an eye on your alpha to ensure that she remains a protective mother hen and does not devolve into an abusive, intimidating bully.

Read more: Why does a rooster crow? A few reasons, actually!

Every now and then, a female may take on the physical traits of a male. She may grow taller, heavier and wider through the chest. Her comb and wattles may become larger, fuller and redder.

Her shank buds may even grow hard, sharply pointed spurs.

Although she hatched as a pullet, your hen has now become a rooster. These physiological changesâ€”called spontaneous sex reversalâ€”are hormonal in nature and usually linked to damage to the hen’s left ovary.

All female birds are born with two ovaries. In chickens, however, only the left one develops.

Should the left ovary sustain injury or damage by a cyst, a physical accident, or bacterial or viral infection, the vestigial right ovary regenerates into an organ called an ovotestis. Unlike an ovary, an ovotestis serves as a testicle and releases the male sex hormone androgen. This causes the hen to develop male physical traits.

According to the University of Kentucky’s Dr. Jacquie Jacob, there have even been reports of hens who have developed ovotestes actually producing semen. That makes these gender-switched chickens capable of fathering offspring.

Read more: Can egg shape actually predict the sex of the chick inside?

It seemed to me that something had affected Goldie’s left ovary, causing the Orpington hen to spontaneously transform into a rooster … at least in appearance and behavior. Since Tamara and her family do not live in a zone where roosters are prohibited, the question of keeping Goldieâ€”or explaining to her town’s ordinance director that Goldie was indeed genetically femaleâ€”was not at issue.

I advised Tamara to teach Thomas and Cal to treat Goldie like an overprotective, ornery Orpington rooster. They should tread lightly around Goldieâ€”and the rest of the flockâ€”until the bird’s androgen levels stabilized and until Goldie wasn’t acting like a hormonal, randy teenager.

Goldie’s days as an egg layer were most likely over. But now Tamara and her family could look forward to getting to know and love their “new” rooster.