Hemp Can Raise Farm Profits (Without Getting You High)

Newly legalized in many places, hemp is big news these days, and the crop presents numerous agribusiness opportunities large and small for farmers and growers. 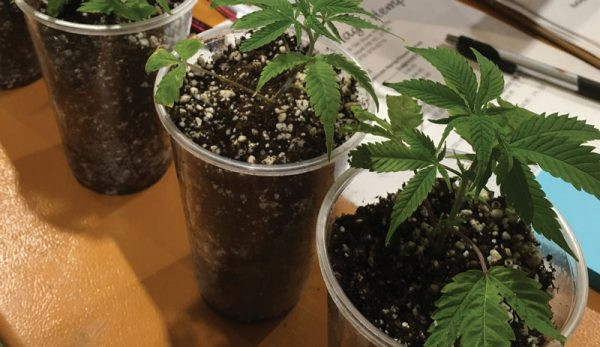 Suddenly, depending on where you live, you might have legal access to medicinal marijuana, recreational marijuana, industrial hemp or even artisanal hemp. Thatās a lot of change in a short time.

You might be thinking: Arenāt hemp and marijuana really the same plant? The answer is both yes and no. First, though, letās talk about money.

This year, American farmers will sell about $25 million worth of hemp. In 2022, that amount will quadruple. But that will still be many times smaller than what Canadian farmers are earning with hemp, where it has been legal since 1998.

This is a crop that bears watching and perhaps even some planting.

To learn more, last December, I followed up with a visit to the storeās Very Hempy Holidays: a mini-market of local growers.

But perhaps we should get our terms straight. Astute readers already noticed that marijuana and hemp both have the same Latin name: Cannabis sativa. But if one of them gets you high and the other one gives you gas (biogas, among many other products), how can they be the same plant?

A few botanists claim that marijuana and hemp are different species entirely. Other botanists say there is only one species of cannabis, composed of a number of cultivated varieties that can interbreed.

Weighing in as a horticulturist, I was taught that anytime plants can interbreed, they are the same speciesāby definition.

The U.S.s has defined marijuana as a plant with greater than 0.3 percent THC. Thatās the molecule that gets you high.

A cannabis plant with less than 0.3 percent THC is hemp. It wonāt get you high no matter how much you smoke or eat.

But these two plants can be split up even more than that.

Marijuana has many varieties with varying levels of THC and different effects on your mind. In some states, you might be able to grow medicinal or recreational marijuana legally.

But thatās beyond the scope of this article.

Hemp also has an array of varieties with different qualities. To grow and market it, youāll need to know which cultivar is right for your soils, rainfall, latitude and market.

Focus on markets first. Some overeager hemp growers havenāt been able to sell their crops because they didnāt lock in buyers early.

As of this writing, only four states donāt allow hemp growing: Idaho, South Dakota, Mississippi and New Hampshire. But even where itās legal, itāll be regulated, as some folks are still concerned about the similarity to marijuana.

Many states are still engaged in āpilot projects,ā and you may have to get a state hemp license for perhaps $250 a year or more. Often, to get that you will have to show a Schedule F tax form to prove that you have farm income.

Your crop will be subject to field-testing. If the seed source or the growing conditions bump the THC levels higher than 0.3 percent, youāll have to burn the crop.

Some legislators are working on loosening that limit.

Hemp is a strong-growing annual plant. But it only produces well if the day length is long enough.

The best time to put hemp transplants in the field is mid-May in zone 7. Put them in the ground any sooner and the shorter day length fools them into thinking its fall and the too-young plants start producing flower buds while theyāre still small.

For small farms, individual plants need room for hand-harvesting, so plant them in rows, perhaps with plastic mulch to keep down weeds. Fortunately, hemp has few insect or disease problems, so growing it organically is viable if you can minimize the weed pressure.

Even the processing can be low-tech. Some people make salves from the hemp oil in Crock-Pots. They add coconut oil and other ingredients to modify consistency and fragrance.

Agribusinesses will be growing hundredsāif not thousands ā of acres of hemp using combines, seed drills and other heavy equipment.

Farmers in Canada have been doing this for decades now and earn a profit of as much as $250 per acre. So 1,000 acres can net you $250,000 after selling your crop for seed, oil, protein, textiles, bioplastics, biofuels or hemp-crete (a climate-friendly alternative to concrete).

However, each acre has as many as 400,000 plants. Weāre talking industrial farming.

A good product opportunity here would be the replacement of common plastic bailer twineāmade from fossil fuelsāwith durable, yet biodegradable hemp twine.

Some farmers even turn the seed into tasty, high-protein snack foods with an omega profile similar to fish oil.

On the other hand, small farmers will likely grow 1,000 or more plants per acre as individual plants in rows. Rather than selling wholesale quantities to processors for the previously-mentioned products, small farmers will want to invest their time in value-added products that deliver CBD oil and sell them retail as often as possible.

In other words, theyāll need to take the artisanal approach.

Just as small farmers have found better pay with farmers markets, farm stands and CSAs, successful small hemp growers will need to search out retail opportunities. I talked to several farmers at that Country Home and Farm event, which hosted half a dozen local growers to market their value-added stocking stuffers to a steady flow of customers.