Pointy eggs, round eggs—can egg shape tell you anything about the sex of the chick inside the shell? We take a look at the answer. 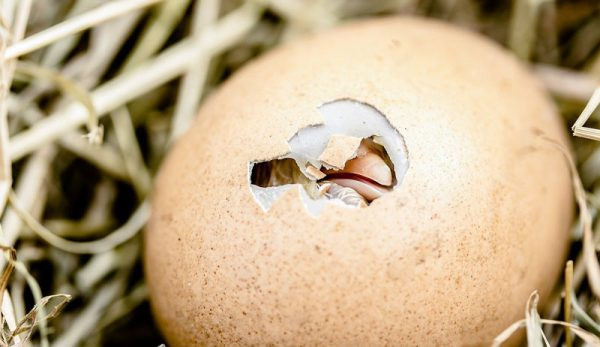 Fate’s fickle fingers dealt our poultry farm a series of unfortunate hands these past few years. We lost 90 percent of our show-quality Silkie flock to a persistent predator. The creature ignored our baited traps and, from what we could tell, continually rammed the Silkie coop’s pop door until it lay in splinters.

And our trio of male Anconas, a heritage breed under observation by the Livestock Conservancy, decimated the females of their flock with their randiness until only one girl remained.

Time to Restock the Roost

We desperately needed to restock our flocks. Over the next couple of weeks, we carefully collected the cleanest eggs laid by Olivia, our last Ancona girl and by Natalya, our last Silkie girl. Since we were hatching, we figured that, since our Orpington girls were getting of age, why not hatch a few Orpington chicks while we were at it?

We loaded the duck eggs into our incubator. Then we gave Natalya her own three eggs plus three Orpington eggs to set. And we hoped for the best.

One month later, Natalya was the proud mom to three adorable blue Orpington chicks. Sadly, the Silkie eggs had not been fertile. Natalya truly was the last of our breed.

At least she was no longer alone. She settled right into her role as Mama Hen, caring for those three little peeps as if she herself had laid them. As for the incubator bunch, we were now the proud “parents” of a half dozen Ancona ducklings.

We were thrilled! Nine new babies was definitely a step in the right direction.

Read more: Interested in starting a custom hatching business? Here are some tips.

It took three months to verify that all three Orpington chicks were cockerels. Two—CJ and the one I had named Margie (short for Margarine, to match her mother, Butters—had started crowing. Or, rather, they sounded like the squeaky toys cockerels tend to sound like when just starting to crow.

The third cockerel, TJ—or Tiny, as I nicknamed him—was affected by dwarfism. But he definitely displayed enough male characteristics to confirm he also was a boy.

This masculine trio brought our Orpington rooster total to five. And that’s three more than we needed for a healthy balance between male and female. But that was just the tip of the iceberg.

As the months progressed, every single duckling grew curly tail feathers. Yep … they were also all males.

So I shared the story of our gaggle of guys with my social-media followers and in my poultry groups. And two responses, both regarding egg shape, came up quite frequently:

The people who posted these remarks meant well. And I appreciated the intent in which their advice was given. I do feel, however, that it’s important to shed some light on what’s myth and what’s misconception when it comes to hatching eggs.

The old farmwives’ tale, believed by poultry raisers across the country, is that the shape of the egg indicates whether the resulting hatchling will be a boy or a girl.

This belief is not news to me. My grandmother shared this nugget of information with me when I was a little girl, assisting her with egg collection. Back then, I accepted everything Grandma said as truth, never doubting her sagacity.

Read more: Incubating chicks? These are the conditions you need to watch out for.

And Here’s the Reality

As an adult chicken farmer, I know that passage through the oviduct can affect the shape of an egg, regardless of whether it’s a boy egg or a girl egg.

You know how some human babies are born with perfectly round heads and others emerge with a slightly conical skull? Eggs also can become torpedo shaped or elongated—or as round as golf balls—during the 24 or so hours they spend traveling from the ovary to the vent.

According to Dr. Richard M. Fulton, DVM, PhD, professor of poultry science at Michigan State University and a Diplomate of the American College of Veterinary Pathologists, there’s a 50:50 chance a chick will be male or female.

“Egg shape does not determine the gender of a chick,” noted Dr. Fulton.

But Wait! (A Possibility)

So, egg shape does not disclose the gender of the chick inside. But there may be a way to slightly improve that 50 percent chance of hatching a female chick.

According to an article published in the Australian Journal of Agricultural Research, hatching eggs that were stored at 40 degrees F and 70 percent humidity for up to a week prior to incubation resulted in a higher rate of pullets hatching.

Eggs stores at 40 degrees, however, resulted in a 54.6 percent pullet rate versus the typical 50 percent ratio.

If you are looking to increase your flock’s male:female ratio, this possibility is definitely worth investigating! I know that we’ll be giving this a go next spring with the hopes of adding some homegrown girls to our flocks.