My husband reluctantly agreed to let me start a backyard flock, but he fell in love with our hens as much as I have. 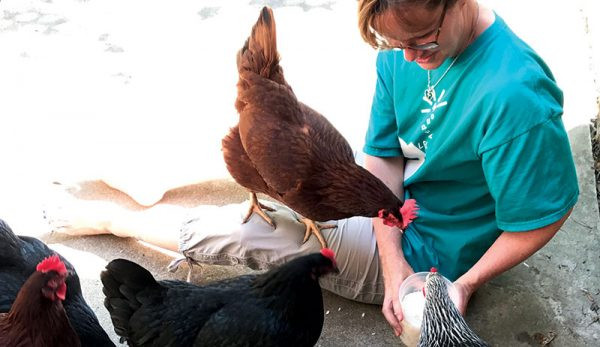 As my husband, Jim, and I pulled up to the farm store, I blurted out, â€śYou know, itâ€™s almost Easter, so they should have baby chicks by now.â€ť Without waiting for a response, I swung open the passenger door and practically ran inside. My husband (following closely behind) sighed audibly. I turned to see him shaking his head in defeat. â€śYouâ€™ve been talking about getting chickens ever since I met you,â€ť he said. â€śJust go ahead and get some.â€ť

â€śI donâ€™t even care anymore,â€ť he said. â€śIâ€™m tired of hearing you talk about them all of the time. Weâ€™ll figure it out.â€ť

He didnâ€™t have to tell me twice. I bounded through the door and was immediately greeted with a familiar â€śchirp-chirp-chirpâ€ť from the baby chicks.

Deep in the Heart

My fascination with chickens originated as a toddler.

My older sister claims to have discovered me contentedly playing alongside cooing hens as they enthusiastically participated in their daily ritual of scratching, scooting and wallowing in a patch of loose soil.

From the age of 5, I often followed my dad around our Nebraska farm as he hauled buckets of corn to feed an assortment of two-legged, feathered fowl consisting of chickens, ducks and geese, as well as an occasional turkey, guinea fowl or peacock.

It has been more than two years since my husband and I brought six fluffy, day-old chicks into our Houston home.

It was initially a kind gesture from a loving husband toward his bride of three years. But it’s become a full-time love affair with our current quirky backyard flock of hens. We now keep two Jersey Giants, two Rhode Island Reds and one feisty little gray-brown Ameraucana.

The girls come when my husband whistles, and he has built from scratch a lovely chicken condo complete with easily accessible nest boxes and a cool water misting system for hot Texas summers. Every sunrise, we free them from their coop before their nonstop chattering awakens the neighbors.

Each hen has a distinct personality and a unique place in our hearts. Zoey, one of our Jersey Giants, is always loud and cantankerous when protesting one of her sisters occupying the favored nesting box, but she still loves to be snuggled.

Jan, one of the Reds, isnâ€™t the brightest bird, but sheâ€™s definitely our best layer. Our other Jersey, Spot, loves to hunker low in my lap with her head tucked neatly beneath my right arm as she purrs herself to sleep. Spot is the only girl weâ€™ve allowed to incubate eggs. Her first attempt at â€śmotheringâ€ť produced 10 chicks, and the second resulted in 12.

Then thereâ€™s Baby. Often described by my husband as being the â€śsmartest bird in the flock,â€ť she is unbelievably sneaky. Whenever I absentmindedly leave our back patio door ajar, she wastes no time darting into the kitchen where she expects me to play a game of ring-around-the-table with her before letting me snatch her up and deposit her back outside.

Having our own backyard flock has been filled with moments of cherished delight along with episodes of unexpected drama and grief, such as the time Lilâ€™ Billy disappeared one rainy October evening.

I was in the middle of a night class at the University of Houston when my husband phoned to say he had come home after dark and Billy was missing. There appeared to have been some sort of a scuffle near the patio door. I rushed home, and we scoured every inch of our backyard to no avail.

She had simply vanished. We cried.

The next morning, my husband left before dawn. At daybreak, I walked past the patio door and I heard Billyâ€™s familiar squawk. I raced outside to find her perched in the branches of a tree high above the roofline of our one-story home. What frightened her into flying up there we will never knowâ€”perhaps a hawk or incessant pecking from one of the other girls.

My husbandâ€™s favoriteâ€”Gumdrop, a sweet-natured Silver-Laced Wyandotte and one of our originalsâ€”died during Hurricane Harvey in August 2017. Jim discovered her crouched beneath a bush, and he assumed she was trying to stay dry. It turned out she was egg-bound and died suddenly thereafter.

We have spent countless hours entertained by the girlsâ€™ antics. Sometimes my husband splits firewood as they eagerly crowd around hoping to score a stray wood ant or grub. After coming home from work, he often exchanges his work clothes for â€śchicken clothes,â€ť grabs a handful of lettuce and flops lazily onto the hammock as the girls excitedly rush to gobble the green treat from him.

After all the lettuce has been devoured, usually everyone except Baby meanders off. She settles contentedly on my husbandâ€™s belly as he gently sways back-and-forth enjoying a moment of solitude.

This is his time to decompress, and the girls are his quiet companions after a hectic workday. I might have been the one always â€śtalking about getting chickensâ€ť when we met, but he would miss them the most if we were ever forced to part with them.

This edition of Chicken Chatâ€”readers telling their stories of chicken-keepingâ€”appeared in the September/October 2018 issue of Chickens magazine. For a chance for your tale to be chosen, email the story of your chickens in about 750 words to chickens@chickensmagazine.comÂ (subject line: Chicken Chat). Be sure to include high-resolution images or photos of yourself, your chickens and/or your coop.

Susie Kelley lives in Houston, Texas, where she is an undergraduate student at the University of Houston studying education. Following her graduation in December 2018, she hopes to obtain a job teaching middle school English language arts.